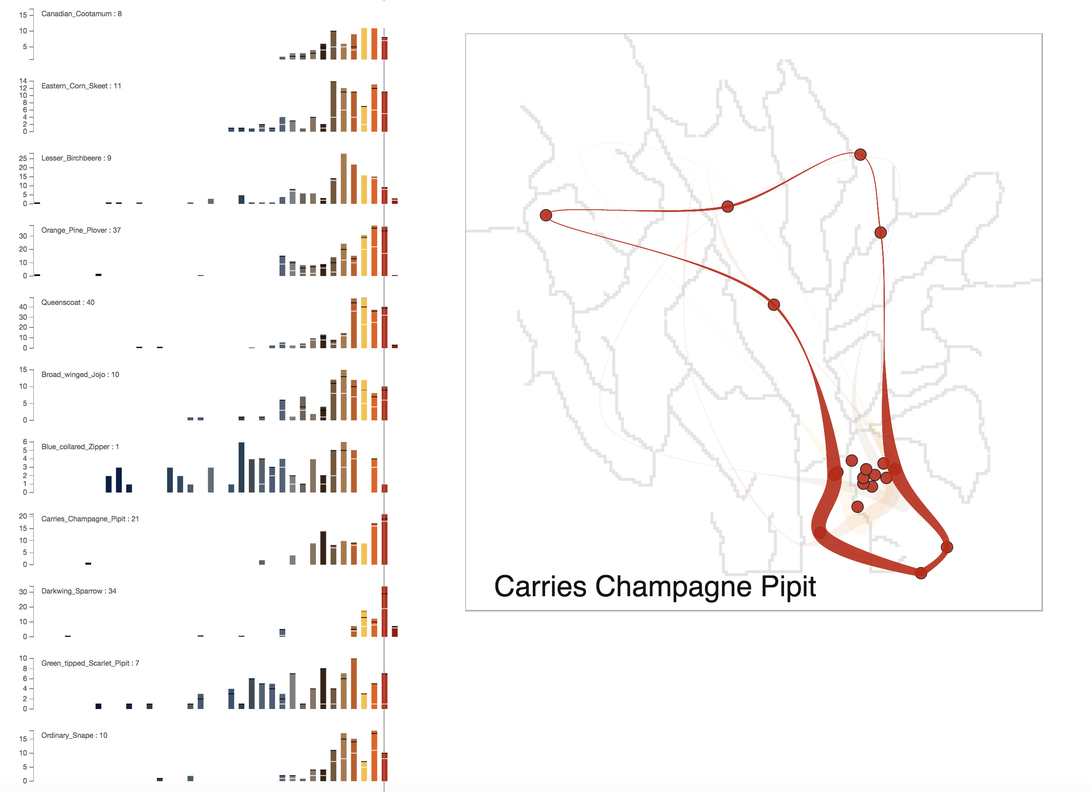 PhoenixMap, a visual analytics system to help analysts understand spatiotemporal distribution patterns and anomalies of many objects. It focuses on solving quantitatively visualizing the spatial distribution of many points under different categories especially when these points partially overlap with each other. This PhoenixMap system can successfully help us understand the change and patterns of birds’ regions over many years. By smoothing the distribution curves, the graphical perception helps users understand the spatial and temporal relationships numerically.

This showcase is designed for visualizing the given birds’ data includes 19 different types, and the temporal activity records over the past 30 years according to their geo-locations. Backtracking their actions allow the users to understand birds local migrating trends and number changes. A map-based on geolocation is required to express details information. There are two explicit classifications for the data. The first one is tracing on the timeline, while the other is the types of the birds. However, how to deal with the overlapping records (dots in the graph) turns out to be a significant issue. Even though the current pervasive visualization methods recommend enough tendency displaying for spatiotemporal tasks, the lack of quantification is still required to be tackled vigorously.

We introduce a new visualization approach which is able to quantify the discrete data to be visually continuous. We designed an innovative way to use enclosed curves with varies width to represent regions of points in different years or. We first computed the concave boundaries of a set of points, then compute the width of segments based on the density distribution facing the portion. Segments are finally smoothed to generate a smooth contour of these points. We can overlap many distribution contours together. The smooth continuous shapes with different colors can help us quickly see the change in distributions over the years.

Using the bird call collection and the included map of the Wildlife Preserve, we characterized the patterns of all of the bird species in the Preserve over the time of the group. The system shows that it is clear that two significant contributing signs of a decrease in local bird populations are the yearly locational change of the population and the concentration of the population. If there are enough resources and space, a population would not need to expand. As a result, there would be a relatively stable population of birds in the area. On the other hand, a closely clumped population, known as clumped dispersion, is caused by limited resources and an uneven resource distribution, which could lead to smaller, decreasing bird populations.

The conventional methods cause the cognitive overload that influences the user exploration experience by delaying the expected quickness and directness. By our presented PhoenixMap, the comparison of spatiotemporal aggregates can address the quick and direct visual analytics across the graphical results across multi-scenes. Each scene displays the status of the cluster distribution. It will contribute to many geographical and spatial distribution visualization taks.