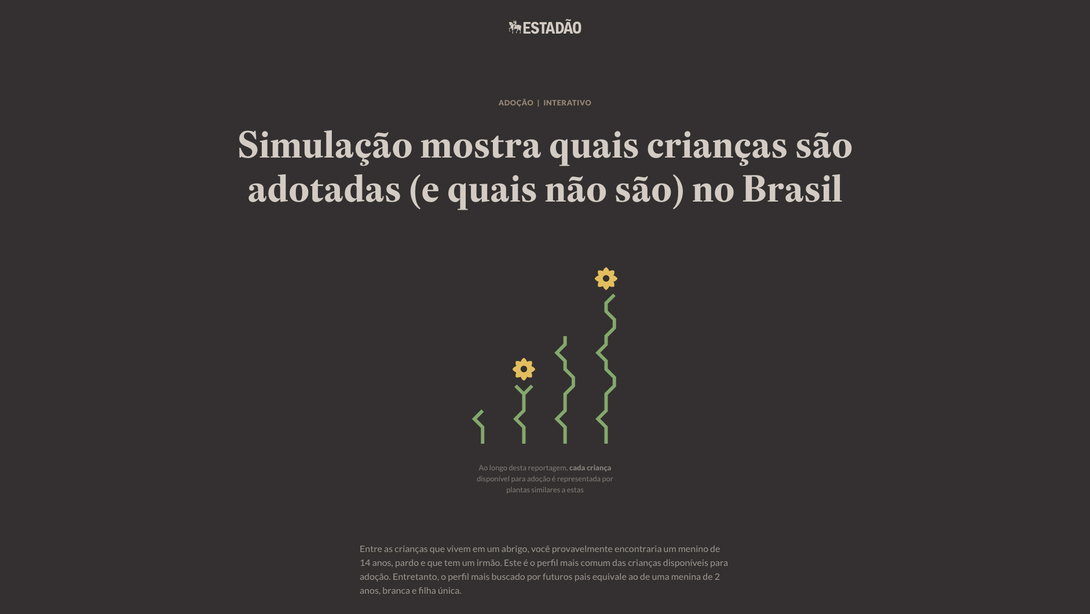 Our Best Non-English-Language category presents us with an opportunity to celebrate vizzes featuring topics and commentary outside of the English-speaking world - i.e., most of the global population. In 2019 the Brazilian news outlet Estadão took home the prize with their project "Simulation Shows Which Children Are Adopted (And Which Are Not) In Brazil."

Can you briefly describe the story behind the project?

Among children living at a foster home, you could probably find a 14-year-old black boy who has a brother or sister. These are the most common attributes of children available for adoption. However, the profile most sought out by future parents is that of a 2-year-old white girl and only child. According to our simulation, the 14-year-old’s chance of being adopted within 12 months is 1 in 1,000. The girl’s adoption is taken for granted. Seeking a more sensitive approach, we opted for a visual metaphor and represented each child
as a small plant that grows as the years go by.

Each child in the simulation is represented as a plant that grows as time passes. Parental preferences greatly impact the likelihood of adoption as the child grows older. 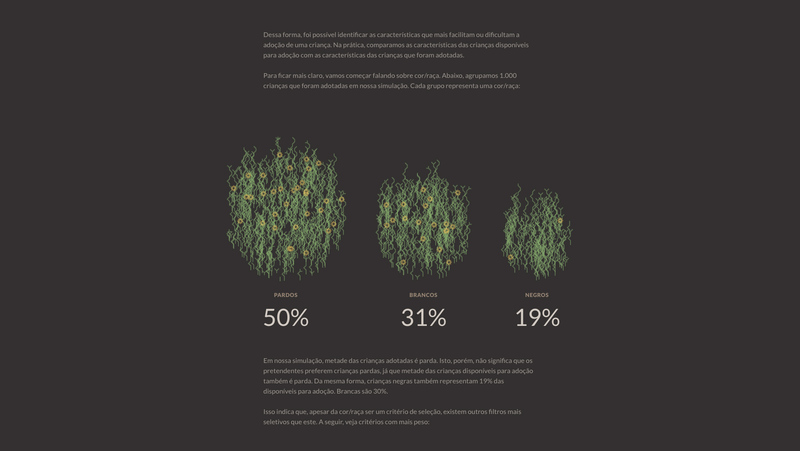 How did Estadão decide to cover this topic?

Have you ever felt like you’re doing the same work over and over? The newsroom routine can get really exhausting – and that was my feeling around August 2019. To shake things up a little, I proposed that the whole team should take a break. What if we went to a public park, worked outdoors, ran an idea workshop and returned home with dozens of fresh ideas? My directors were on board with the idea and that’s exactly what happened.

The team and I co-created the mechanics of the workshop. Basically, we sorted verbs, nouns and adjectives and, in groups, we had 10 minutes to write down a few ideas that stitched those words together. We then voted on our favorites. After that, we had one week to create a raw prototype with the best ideas. The ones that seemed promising would be taken forward.

The first random words my group produced had to do with fertility. We remembered a piece by the WSJ that analyzed the preferences of families in Brazil regarding sperm donors and we thought it would be interesting to compare it to the preferences regarding adoptions. As it later turned out, we had enough data to build a compelling story on the adoption process in Brazil.

In order to tell the story, we developed an open source simulator that matches prospective parents and children. This simulator lets you interactively track how long it would take for a 2-year-old to be adopted – and compare it with the waiting time of a 10-year-old. Through running the simulator thousands of times, it became possible to identify the attributes that most facilitate or hinder the adoption of a child. Being over 5 years old, having siblings or some kind of disability makes adoption extremely difficult.

What made you choose clusters of flowers to depict children in the foster system?

Well, it began like almost all data visualizations: every person was a dot. But that is usually too cold – and we wanted readers to feel connected to the story. So we asked ourselves what could symbolize nurture and care.

We tried to go the route of making the clusters resemble a bird's nest. Every child was represented as a branch. The concept was ok, but those dry branches were a bit sad - and we wanted to give it life. That’s when it occurred to us to paint them green and turn them into sunflowers. This representation encoded 3 types of information:

After running the simulation up until a total of 1,000 children were adopted, we grouped them by different categories: race, disability and siblings. We then compared the characteristics of children available for adoption with those of children who were adopted. This indicates that, although skin color plays an important role during selection, there are other more selective filters in action. For example, almost half of the children with cognitive impairments are not adopted. In addition, children that have brothers or sisters are much less likely to be adopted if they are over 10.

Did you design with universal comprehension in mind?

We actually did not design with universal comprehension in mind, but I believe it is a consequence of using familiar visual metaphors, which makes the simulation more universal in a sense that it evokes familiar concepts. The interactive simulation is a guided “tour” to the underlying data – and I believe this step-by-step explanation makes it easier for people to understand, even if they do not speak Portuguese.

What challenges did you overcome in creating this piece?

The simulation algorithm was the craziest piece of software I have ever wrote. If I were to do it again, I would definately not write it in JavaScript, as the performance was terrible. Of course the interactive part should use JS, but I had to build a parallel version without any DOM manipulation (to increase performance) to be able to run the matching algorithm thousands of times. The output was a JSON file that was analysed in Python, using Pandas.

One fun fact - on the simulation, I honestly don’t know what would happen if the 10-year-old child was actually adopted in less than a year. The chances are so low that I didn't even handle this scenario. Up until now we didn’t receive any complaints regarding this case, so I guess it is not a BIG problem. I’m not proud of it, but I didn’t really have the time to handle this case.

For news outlets in particular, what do you think is the potential of data design to relate local stories globally?

I believe that visual design – along with other ways of making humans better perceive data – is an important factor when transforming numbers into ideas that people really feel connected to. The way in which Giorgia Lupi has covered this topic in her manifesto about data humanism is amazing – and I would like to quote a few words that really resonate with our decisions behind this story:

“The more ubiquitous data becomes, the more we need to experiment with how to make it unique, contextual, intimate.” - Giorgia Lupi on data humanism

Furthermore, I’d like to point out that a few Brazilian researchers, like Luiz Morais, are building up a list called Anthropographics, that covers data projects about people that abide by similar principles. Feel free to check them out.

What was the impact of submitting this project to the Awards and winning the prize for Best Non-English Language dataviz?

Back in 2017, Rodrigo Menegat and I won a bronze medal in the same category with the All the Government Barbecues project. This visibility was incredibly positive for me and Rodrigo. But the project itself was independently published – and had only been viewed a few thousand times. Being published with a major media company really brought the spotlight on this project. It had an incredible impact on the public, as seen through Twitter comments on the article:

“Reading about adoption, watching the simulator they developed and crying inside an Uber. I really want to be a stable adult to be the mother of these kids”

Our underlying goal was to promote a shift in perception, so that those charts and numbers could look – a few years from now – a bit different.

Posted in Awards — over 2 years ago
Previous Best of the Web: January 2020 Next 6 Years of Outstanding Outfits