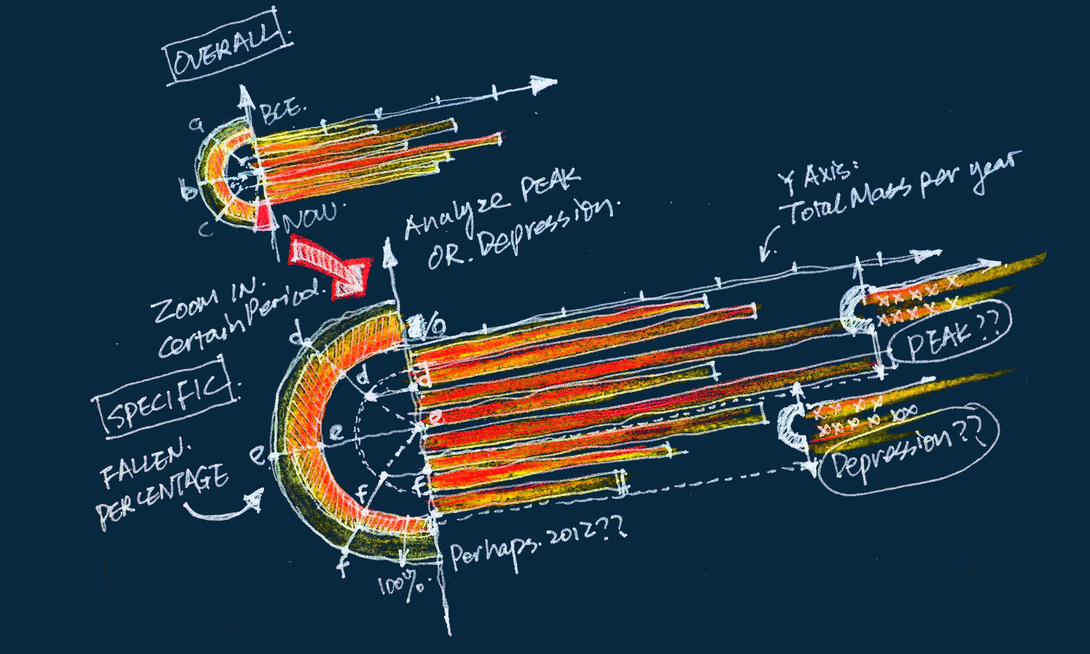 Nick Bostrom has a very interesting paper called ​“Existential Risk Prevention as Global Priority.” The basic intuition is that preventing even small risks of human extinction is worthwhile if we consider all the human generations it would save. One way to start saving future lives might be by digging into Meteorological Society dataset of every recorded meteor impact on Earth from 2500 BCE to 2012.

Previous records of epic meteor events leave us wondering:
Are we living in a meteor peak period? Are we getting a better chance of seeing a splendid meteor shower?

To understand the patterns of global meteor events, we decided to explore the dataset from two parameters:
1. The total mass per year. A bar chart was constructed in Tableau showing the sum of mass for each year.
2. The fallen percentage. The ratio of meteor events that were seen and were tracked down successfully.
A graph visualizes two parameters using a shape resembling a real meteorite to enhance audience immersion.

Existing data suggests that the probability of observing a meteorite is decreasing, so does the total mass of meteors that reach the ground per year. It is speculated that the reasons behind these due primarily to the lower atmospheric clarity than before and thicker cloud conditions where the meteorites are more likely to burn up. Even so, preparation is always a must. “We know for a fact the dinosaurs did not have a space program.” NASA Administrator Jim Bridenstine said, quoting TV personality Bill Nye. “But we do, and we need to use it.”