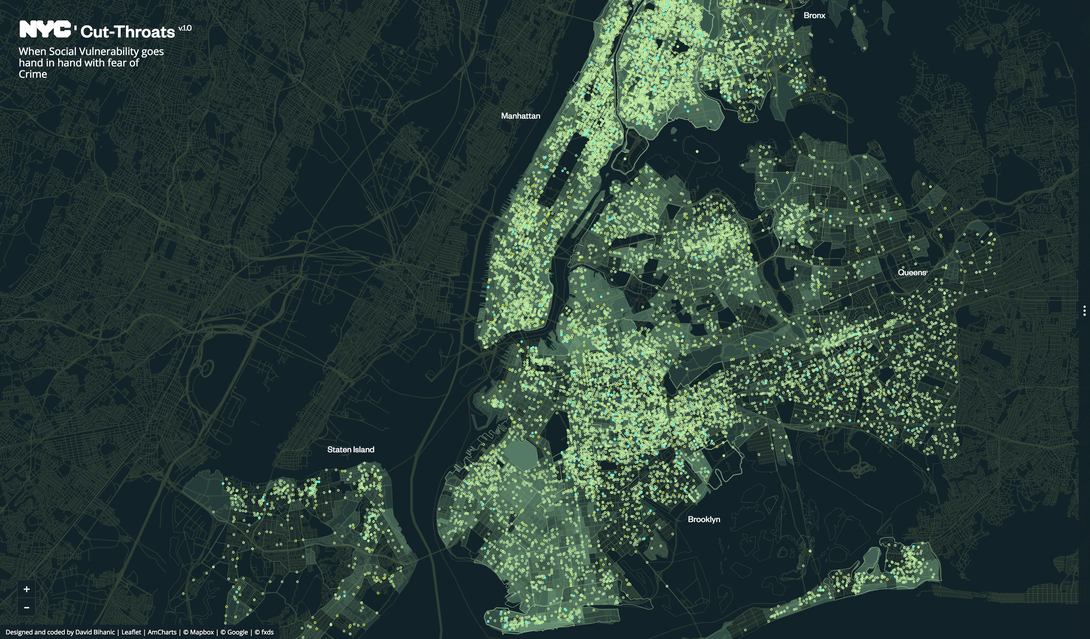 NYC Cut-Throats. When Social Vulnerability Goes Hand In Hand With Fear Of Crime by David Bihanic

In the words of Bill de Blasio and his team members, the New York City government would be at the brink of definitively rooting out crime, that is to say putting an end to all forms of violence against persons, as well as violations of their physical (and mental) safety starting with the most serious: intended and unintended killings and aggravated assaults. The statistics speak for themselves, argue the elected local officials ; the rate of crime is constantly decreasing: 330 intentional homicides in 2017, compared with 334 in the previous year, according to the New York Times; a record rate, the lowest since the end of World War II. A spectacular fall regarding to the dramatic peak of 2,245 deaths recorded in 1990. Let us remind ourselves the commitment made at the time by Rudolph Giuliani (former mayor of the city) to pursue a “Zero-Tolerance” policy against crime (a slogan borrowed from Ronald Reagan). The Republican had then engaged in a fierce fight against offenders and criminals promising the inhabitants the return to a quality of life lost during the previous decade. This was his second aim (and slogan): the famous “Quality of life policing”.

What is the concrete situation today? If the crime rate has indeed declined, does that mean, arithmetically, the quality of people’s lives is improving? And if so, does the living conditions really progress for all citizens? In the present webmap, I’ve reconciled two datasets: a first one drawing up a list of the major crimes committed in NYC during the year 2017 (such as murders, assassinations, beatings and further types of physical attacks) — these data are provided by the police authorities — and a second one listing a whole series of measures dealing with the social vulnerabilities on the territory — Social Vulnerabilty Index are produced by Regional Plan Association. The conclusion is clear: if the quality of life is apparently improving for certain individuals, many others still fall prey to crimes which are rampant in some boroughs, quarters an streets where social distress is most acute. We are all aware of the huge social fragmentation that splits the city in two (are residing in NYC both the very rich and the very poor). But what may be less well known is that misery, poverty and state fragility are often, if not always, linked to insecurity, physical (also psychological) suffering and constant fear.