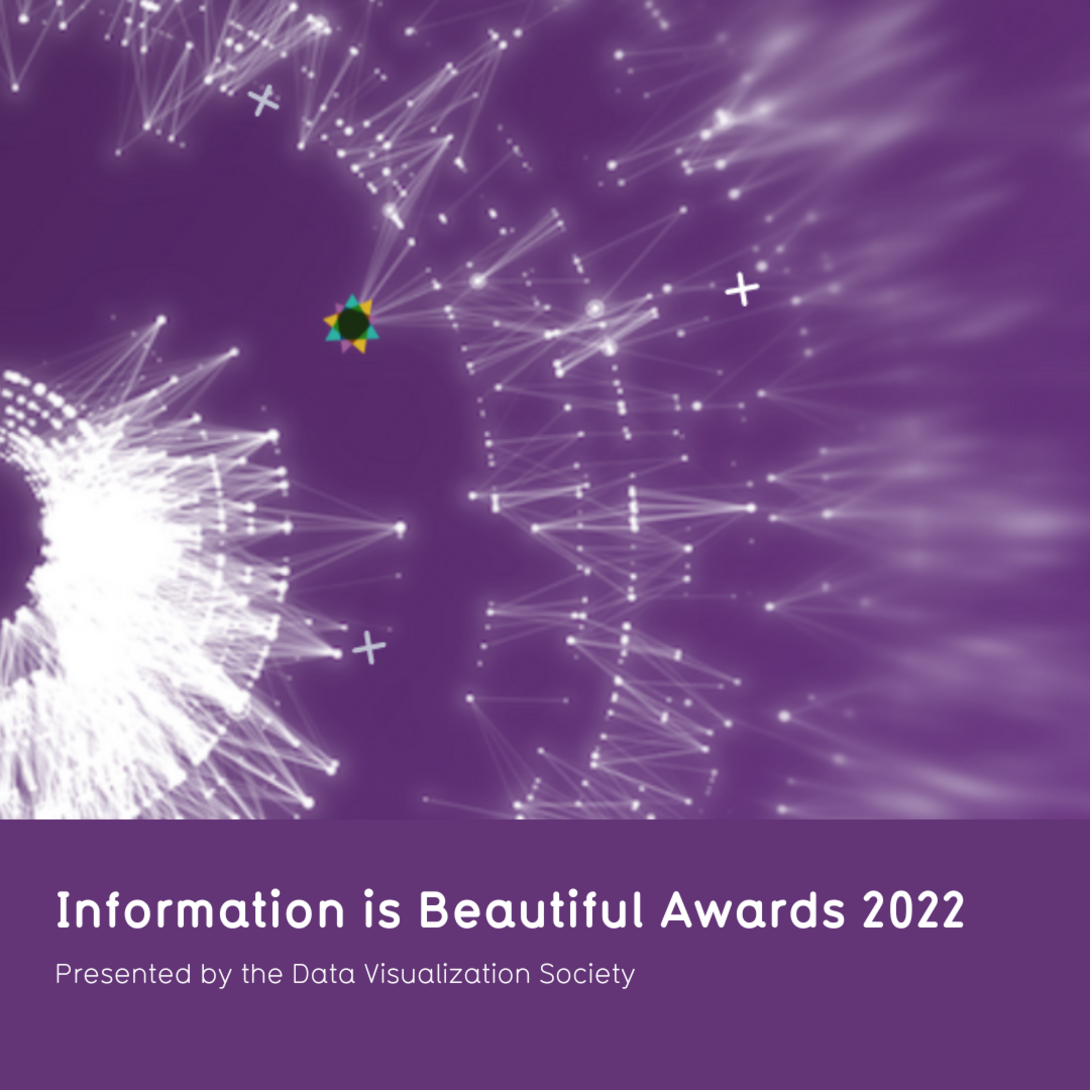 The Information is Beautiful Awards are Back!

How we got here

The announcement has been months in the making – years, if you count the initial discussions our board had about the benefits and challenges of data visualization awards programs and if DVS would, one day, want to host awards to celebrate some of the exemplary work happening in the data visualization community.

The COVID-19 pandemic has affected the events and awards industry in many ways. A number of annual conferences and events were postponed or canceled outright; some will not return in the coming years as organizers shift focus to new priorities. IIB went on pause for two years, and Malofej announced that they were sunsetting permanently.

For much of the last decade, the IIB Awards have been a consistent, shining beacon to take the once relatively unknown specialization of data visualization and showcase it year-after-year with excellence and beauty, often paying attention to the value of cross-functional, multi-disciplinary teams that strike that balance. You only have to look at the growth of the award types and the range of winners to see the impact of data visualization, from newsrooms to human rights organizations to personal celebrations and whimsical moments represented in data.

For the Data Visualization Society, being on the receiving end of a passing torch, representing an exemplary awards program, aligns with our core mission as an organization to celebrate and uplift the professional discipline of data visualization. At the heart of our community, we aspire to be “Where dataviz comes together.”  We feel we have a duty to partner and support a wide range of organizations and programs that share our mutual values, and we believe that while there’s still growing room to improve the IIB Awards for coming years (read on!), the Awards have been a place to discover new data visualization talent, recognize exceptional work, and showcase the impact of the field as a whole.

The history of the IIB Awards

For those less familiar with the IIB Awards, here is a bit of background. From 2012 to 2019, the IIB Awards celebrated beautiful visualizations from across sectors, developed in various platforms and physical spaces (including data art installations), and individuals including rising stars and students creating data visualizations. You’d likely recognize past rising star winners, like Nadieh Brehmer, who have continued to create inspiring work.

Winners were announced and celebrated at a ceremony hosted across the years in  both London and New York City.

You can browse the rich history of submissions on the IIB Awards website, which is an incredible source for inspiration and is often referenced by teachers looking for dataviz examples to explore with students.

Why awards uplift an industry

In our State of the Industry discussion, we ended with an interesting question: is data visualization, itself, an industry? Some say yes, as it’s a discrete field with a set of skills and dedicated roles. For others, it’s a broader discipline that encompasses many people across fields and functions–more as a core skill for other professions.

What we do know is that over the last decade, since the IIB Awards launched, data visualization has become increasingly recognized by the general public as a means to make sense of complex information and statistics in the world around them. The pandemic, in particular, has put data visualization in the spotlight.

Decades earlier, many statistical graphics were designed primarily for function (not for aesthetic beauty). Speed to understanding was a priority, promoted and widely discussed by experts in the field like Edward Tufte and Stephen Few. While there have always been innovators, dating back to the earliest ways in which data was marked on walls or knotted into colored cords and zooming forward to the more creative visualizations of advocates like Florence Nightingale and W.E.B. Du Bois, most graphics created in the business and research domains prioritized function.

The IIB Awards became a space to celebrate more creative visualizations – data art installations, brilliant scrollytelling, magazine centerfolds, and physical installations designed with data. The repository of long list, short list, and winning submissions each year is a testament to the diversity of design approaches and aesthetics in our field today. Looking forward, we want to continue that annual celebration, building upon that rich history of data visualization excellence.

With much celebration around the return of the IIB Awards, we also considered valid concerns about the necessity of dataviz awards programs. Many of the same criticisms the community surfaced came up in our internal brainstorms, and we want to address them here and welcome further conversation.

Here are four concerns we’ve heard about dataviz awards programs and thoughts on how we plan to address these concerns:

An annual awards program is just one of the many platforms where we celebrate and amplify great work. With the ubiquity of social media, content management systems (like WordPress) for individuals to post their portfolios publicly, and constant chatter throughout the dataviz community, there are many ways to recognize and celebrate excellence in our field.

Those means of sharing work, through social media, podcasts, public promotion, blogs, and other self-managed platforms takes time though – and time is a privilege that we should recognize as such. Maintaining a blog or running a podcast is not a light lift; making sure people see your great work requires a comfort with sharing and self-promotion that doesn’t come naturally to everyone. Those putting in the work to build their own platforms don’t have the same followings as some of the bigger names in dataviz. These mediums also necessitate skills outside of visualization, like writing, audio production, and website management.

An awards program, and the associated repository of submissions, creates a central place for dataviz enthusiasts to browse by topic, year, or style. An awards program addresses the challenge that often the most recognized in our field are those who are routinely sharing and producing impactful visualizations publicly. If a solo practitioner spent a full year on one big–or little, but stunning–project, awards allow us to recognize the quality of that individual piece, rather than a portfolio.

The heart of the IIB Awards, as David said in his address to the Outlier attendees, has always been about celebration – celebrating brilliant work, newcomers in the field, and the ways dataviz has become increasingly part of how the general public interacts with the world around them.

We aim to prioritize that same spirit of celebration in the 2022 IIB Awards, including celebrating more designers from historically underrepresented regions and groups, perspectives, experiences, and backgrounds. Past IIB Award seasons have included a non-English language category as one way to ensure designers working in other languages can be recognized. Speaking to past award winners, particularly in the student- or rising-star categories, winning an IIB Award has helped to open doors and create opportunities. Even having work featured in the gallery has been a way for clients to discover talent.

Having been a judge for various data visualization competitions, assessing and ranking visualizations (that may be vastly different in design aesthetic and goals) to pick a winner is a difficult challenge at best. I worry that we fall into the trap of preferencing selections that mirror our own aesthetic preferences and choices – though that’s not unique to data visualization and is a challenge in any creative field.

We have the added challenge in our field of the wide inspiration available to us as we create new charts and data experiences. Should judging consider originality, for example? How are inspirational sources credited by the designer, and how did they make the concept their own with new datasets, topics, color palettes, or other components?

As we move forward with plans for this year’s awards, one big task is setting up the judging rubrics and approaches with an eye towards transparency–for those who are submitting work for consideration, for those looking to cast a ballot in a community award (selected by public vote rather than a judging panel), and for the general public browsing the gallery of submissions and winners.

Few, if any, dataviz awards programs or contests include a data validation check as part of the judging process. Validating the datasets are represented accurately for every submission would be a time-consuming task, and may be particularly challenging if there are security or privacy reasons that the source data cannot be shared with a judging panel.

Using quality data and representing it appropriately are important facets of a data visualization award, and we recognize those steps are seldom part of a judging process. Validating the underlying data in figures isn’t always a part of peer review in a journal article (as we’ve seen in some of the misrepresentations and fabrications of information throughout the pandemic in the rush to publish). In those instances, requiring source data for validation would be more straightforward than in a dataviz competition. Would data validation steps bias or benefit those we are using self-reported data (like the illustrations from a Dear Data project), where there isn’t a primary source to point to? Would it limit submission of public facing work where the raw source data cannot be publicly shared for privacy reasons? Data as a medium is complicated.

Just because data validation isn’t common, or could be cumbersome, doesn’t mean it can’t be done. Awards programs should evolve and improve with time, and adding a data validation step within the process before crowning winners is one more evolution to consider, weighing the benefits and drawbacks of additional steps in the judging process.

There’s a first time for everything. We’ll be talking about updating categories and criteria as we frame out the structure for this year’s awards program. We’re excited to have David, and a few other advisors, providing support along the way, but also thrilled to have the flexibility to evolve what kind of work gets recognized.

This month, the team is setting up our workplan and sourcing community ideas and input around the 2022 IIB Awards x DVS. Check out the DVS Slack if you’re a member (it’s free to join!) to contribute to follow those conversations.

We are wholly committed to continuing the spirit of celebration of the wide and diverse ways that data is shaped into insights, interactives, and art. As a professional society, we’re following in the footsteps of many other organizations that run awards programs, with the challenges that come with judging creative work, and know that you’ll hold us accountable as the process unfolds.

As someone who has never submitted my own dataviz work for any kind of award (perhaps out of a bit of imposter syndrome) I would urge you not to follow in my footsteps. When submissions open, think about the work you’re most proud of from the last year that can be shared in a public space and submit it for consideration! And if there are others in the dataviz community whose work you admire, consider nudging them to submit a particular piece as well. In the past, IIB has allowed for nominations of great work by others, which is an approach we could also continue.

If you have any suggestions, ideas, or other concerns, my inbox and Slack messages are always open. Thanks for being part of this community and supporting us as we take on this big project!

This article was originally published in the Nightingale (Journal of the Data Visualization Society) on February 17, 2022.

Posted in — 10 months ago
Previous Submissions are open for the 2022 Awards! Next Best of the Web: January 2020