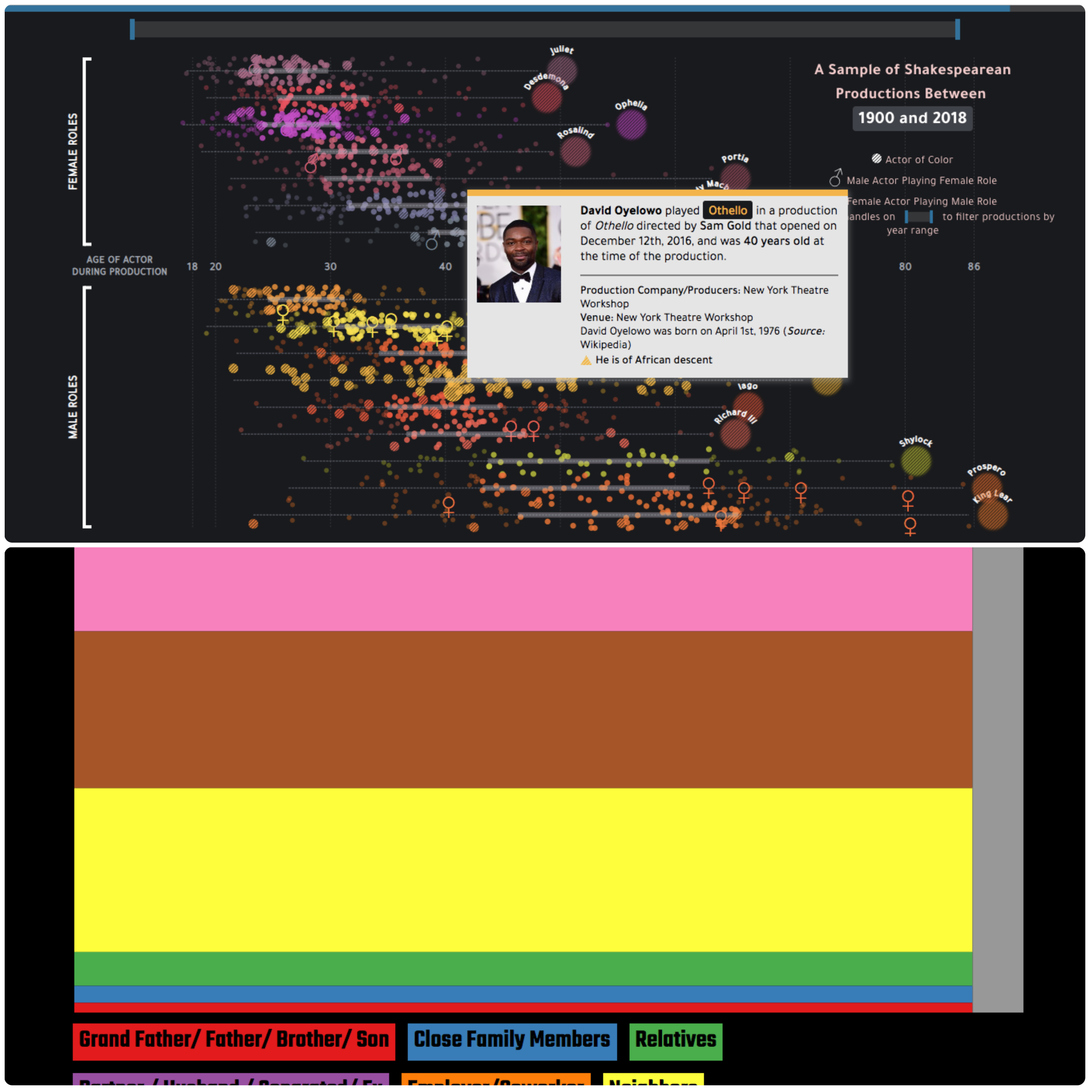 Where are they now: Eric + Aditya

Ever wonder what dataviz rockstars get up to in the off-season? Join us as we chat with winners from the 2018 Information is Beautiful Awards.

Aditya Jain and Eric Lin made waves last year with their boundary-pushing work - discover what these creators are up to now. And be sure to check out this post featuring two more intrepid data wranglers.

Thinking about submitting your work to the 2019 Awards? Don't delay - the deadline to enter is 30 August. Enter here. 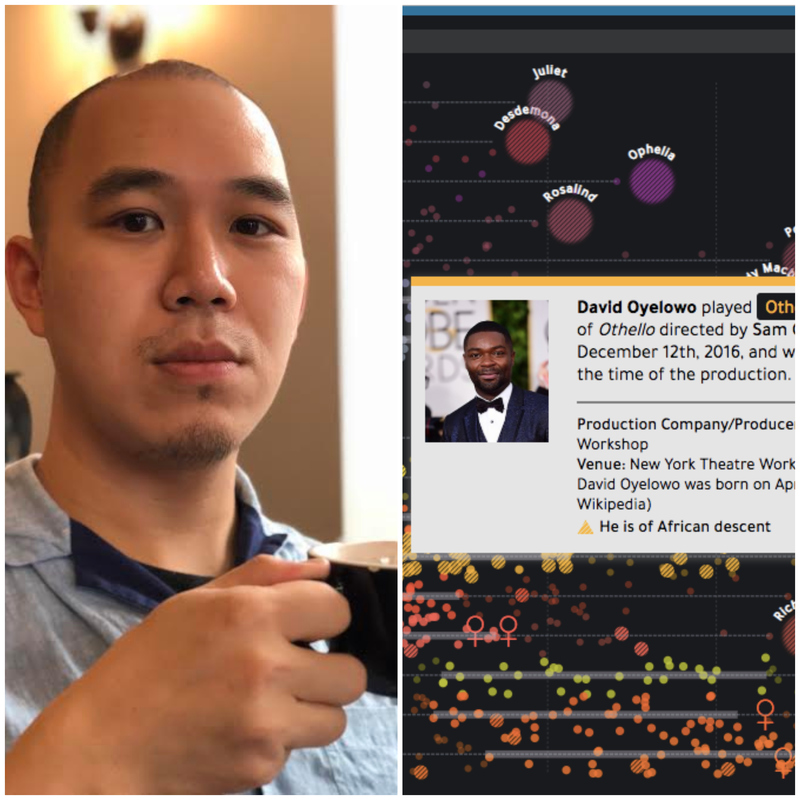 Eric Lin won Bronze in the 'People, Language & Identity' category with his viz exploring how characteristics - such as race, gender and age - affect casting in professional Shakespeare productions.

Eric, can you tell us what inspired you to submit this work to the Awards?

I’m certainly not the first one to say this, but the IIB Awards entry showcase archive is pretty legendary among dataviz practitioners; I see it as a gallery of some of the most interesting and innovative work done in the field in recent years. I actually keep a private “envy list” of entries I wish I had created myself.

For a long time, most of my dataviz work has been for clients, and sadly, I haven’t been able to publicly share much of it. As a way around that, I’ve started to carve out more free time to work on data side projects. I was an artsy kid, so I ended up doing two projects back-to-back that both involved the performing arts - one on the New York Philharmonic’s performance history, and another about productions of Shakespeare’s plays. I submitted both to the Awards last year, in part because I wanted to know where I stood next to practitioners at the top of their game. Many of us in creative professions often vacillate between feeling really great about our work on some days, and feeling absolutely miserable and worthless on others. Entering the Awards was a kind of objective gut-check for me, even though I’m aware that judging creative work will always be, on some level, inherently subjective.

What have you been up to since winning Bronze in your category?

I recently joined Capital One’s Data Visualization team in a hybrid design/engineering role. It’s been a blast working with a fantastic team on something that impacts practically everyone: money and finances. Our team is led by some truly forward-thinking dataviz practitioners like Kim Rees, Diana Yoo, and Alana Washington. For now, most of the things I’m working on are for internal consumption. If and when I get to work on more public-facing projects, hopefully I’ll get to share some of that.

I always have personal projects that are ongoing, but nothing quite ready for a public announcement just yet.

How do you think winning in the Awards affected your opportunities in the dataviz space?

Since my few public projects are all self-published, winning an award last year definitely helped to get my work in front of a lot more people than would otherwise have been possible. I was fortunate enough to get invited to give a short talk on my winning project, Casting Shakespeare, in front of an audience of theatre and digital humanities scholars at the New York Public Library. It was fascinating to learn that practitioners in other domains are also drowning in a deluge of data, and are hungry to find ways to make sense of it. Those of us in dataviz have a lot to offer other fields, but we need to be open and remain curious about areas where we're not the experts.

What's the best place to interact with you and your work?

You can check out my work at ericwilliamlin.com, but I’ll admit that I haven’t been very diligent about updating. The best way to interact with me is probably through social media. Tweet me @ericwilliamlin! 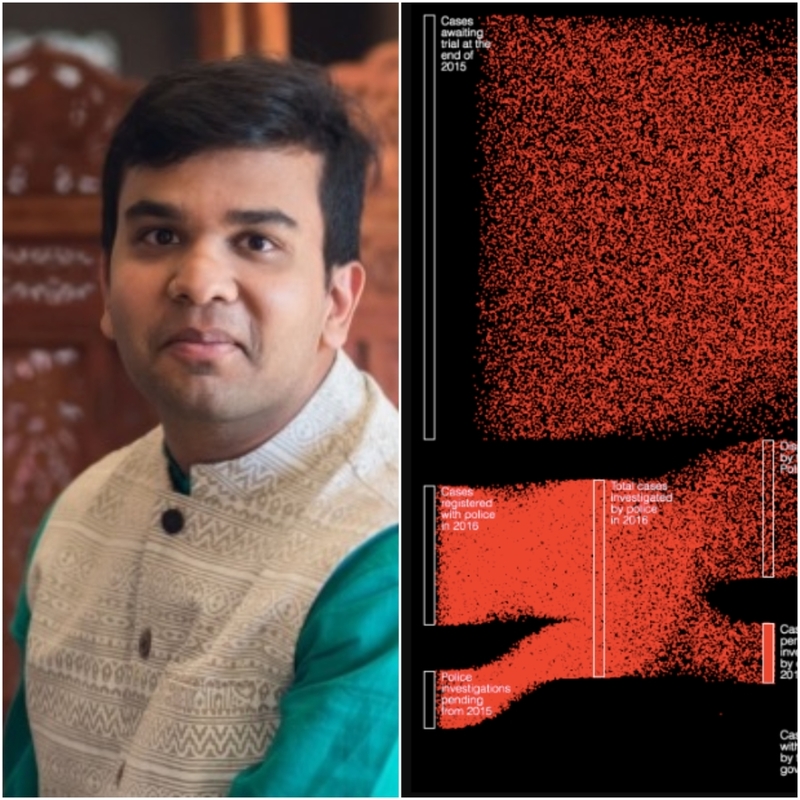 Aditya Jain was our Silver winner in the 'Humanitarian' category with his entry exploring rape culture and the response of the justice system in India.

Aditya, what have you been up to since winning in the Awards?

I've worked at a couple of newsrooms in the United States and in India, covering the 2018 midterms and 2019 General Elections respectively. I'll be headed to NYU for grad school later this fall.

What initially inspired you to submit your work to the Awards?

The IIB Awards are a great platform to showcase one's work, and gain some recognition at the same time. A lot of people whose work I admire have won the award in the past so I thought I'd throw my hat in this time around.

How did winning in the Awards impact you?

I think it does give one a fair amount of credit in the community, so thats nice.

How can fans & colleagues interact with you and your work?