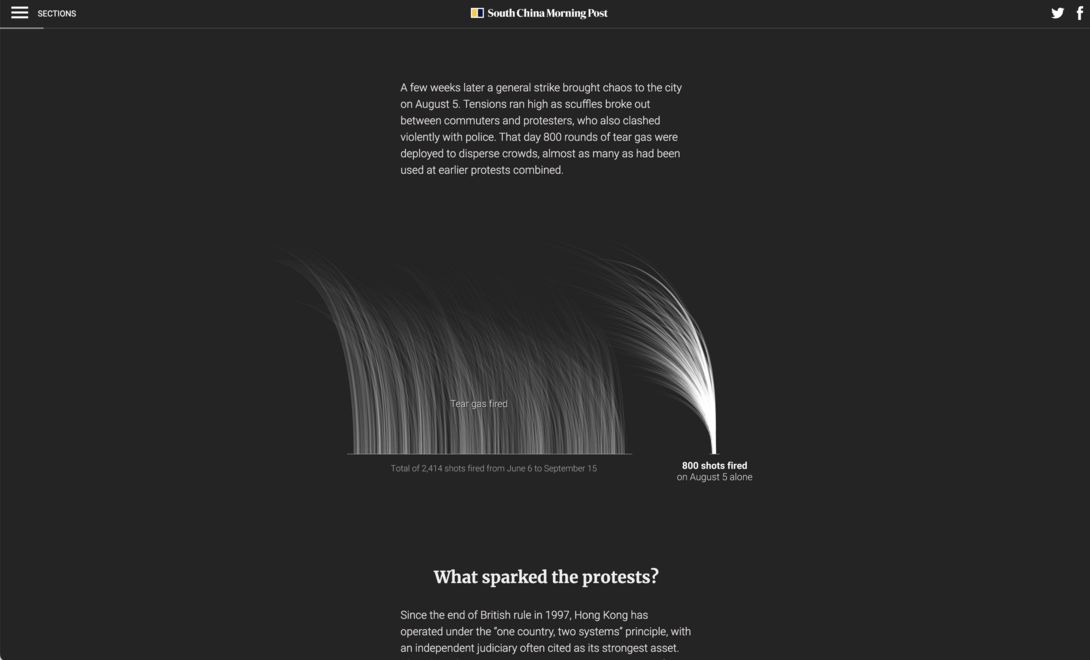 The pro-democracy protests in Hong Kong during 2019 represent a milestone in the city's history and a breaking point between the situation prior to the anti-Beijing movements and what would happen later with the crackdown of the Chinese authority to suffocate all demonstrations through the enactment of the National Security Law.
The protests continued to evolve, going from being massive and very peaceful, turning into violent events in the space of 3 or 4 months, that is what is sought to be consigned in this visual piece.
It is an illustrated timeline with visual resources used, following the information to explain. The images, supported by labels and symbols, help to analyse the most critical moments of the clashes between police and protesters, there are illustrated analyzes of parts of the body affected by police repression, the operation of anti-riot elements, displacement maps of groups of people, timelapses, videos and other resources that are consistently designed to form an articulated, coherent, complete and easy-to-explore visual story.
It was decided to use the first 100 days of protests even though the protesters continued to take to the streets until May 2020. But this first hundred is very significant in political terms and is a benchmark with other similar movements that have occurred in Hong Kong. This timeline of events analysed with infographics is considered a reference document to better understand the evolution of pro-democracy movements in Hong Kong.
Almost all of the visuals are static, Adobe Illustrator was the tool used to build this explainer. The information included in each visal is pointing out the most relevant aspects of each situation only. We avoided unnecessary interactive features in order to help the audience to focus on explanatory static images and clean graphics.