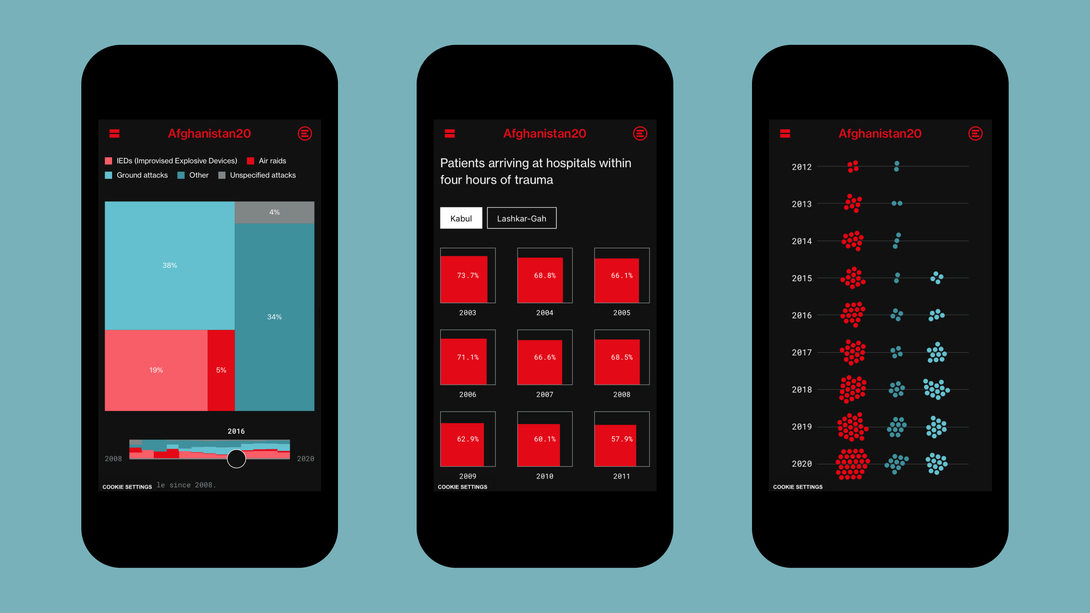 We worked in partnership with Italy–based NGO EMERGENCY to bring to life Afghanistan20: a historical document that utilizes imagery, journalism, and data visualization to portray with empathy the effects of more than two decades of war on civilians.

EMERGENCY—a provider of medical treatment and disaster relief—has been present in Afghanistan since 1999, operating out of three self–sustaining hospitals. Afghanistan20 was released to coincide with the 20–year anniversary of the U.S. invasion.

We were honored to lend our services to the project pro–bono, to raise awareness of EMERGENCY’s work and the ongoing conflict. Working with data compiled by EMERGENCY and UNAMA (United Nations Assistance Mission in Afghanistan), we created a series of data visualizations to add dimension to documentary field work. The final output comprises an interactive, multimedia digital experience and a bound volume, both of which are replete with archival materials and original data visualizations, and available in Italian and English.

The digital experience begins with a simple but impactful timeline that unspools as a user scrolls down. Key dates regarding four intertwined narrative threads—victims, attacks on civilians, access to healthcare, and the future of the Afghani people—are highlighted in red on the right side of the screen, while on the left, numbers populate to show the increasing number of patients EMERGENCY treated each year. The tallying also functions as a UX and data visualization element: as the number swells, the background gradually shifts from black to red.

A note from EMERGENCY founder Gino Strada follows the introduction. He conveys a central thesis with a stat: “In Afghanistan, as in every war that I have seen with my own eyes, nine in ten victims are always civilians.”

From thereon, users navigate through a dynamic, multifaceted report. We see the tireless work of EMERGENCY volunteers and staff through the lens of world–class researchers, journalists, and photographers. Interspersed throughout are data visualizations that add a poignant sense of scale. We learn through visuals that 241,000 civilians have been killed since 2001, and that countless more have died as a result of hunger, disease, and poor infrastructure. We’re informed that it costs roughly one million USD per year to station a soldier in Afghanistan.

Data is represented clearly, in alignment with Afghanistan20's narrative aim and EMERGENCY's overarching mission. The project's innovative approach to information design is in service of engaging readers, and broadcasting to as many people as possible that humanitarian intervention is a non–partisan endeavor.

Since Accurat’s founding in 2011, we have striven to reconnect numbers to what they represent: people, places, ideas. We believe that Afghanistan20 is testament to the potential of data to enrich rather than reduce human–centered narratives. The true toll of a conflict like the one in Afghanistan is impossible to measure. But scale is often necessary to impart due perspective. Artfully rendered, through visuals that immerse rather than obfuscate, data is an instrument through which impact can be expressed with sobering honesty.