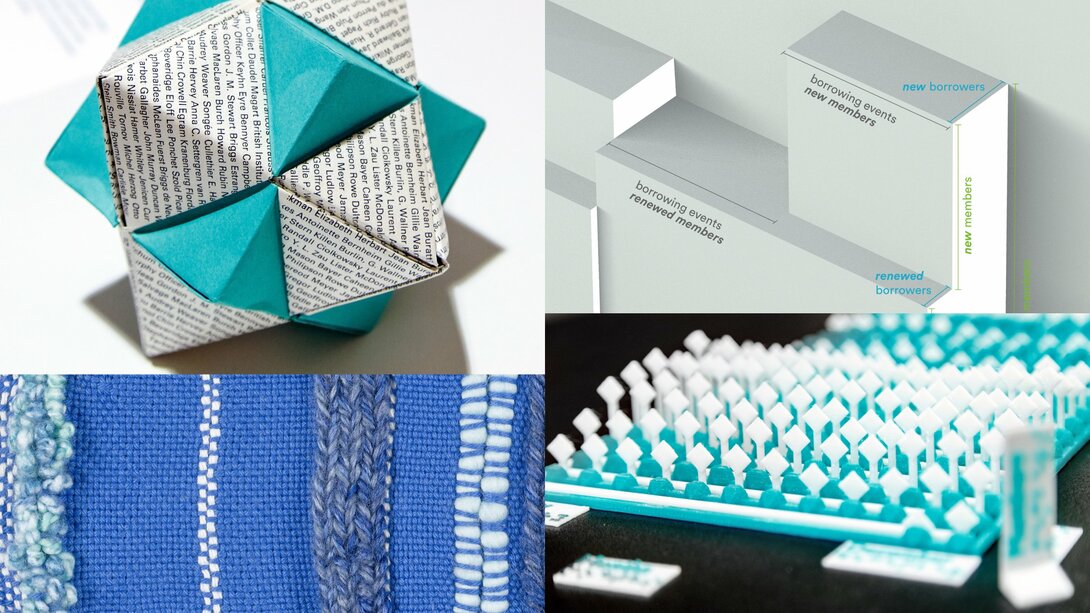 Data Beyond Vision by Center for Digital Humanities at Princeton University

Data Beyond Vision was an experiment in data physicalization to create tactile, tangible representations of data in order to defamiliarize and refresh the insights that the best data visualizations can offer. Working in three dimensions gives additional affordances: parallel data series can be seen next to each other, rather than color-coded, overlapped, or staggered; physical objects can be viewed from multiple angles, allowing for changing perspective. Depending on the medium, objects can be touched or held, engaging senses other than sight. We explored new ways of engaging with datasets and the arguments and narratives behind them, in order to challenge conventional screen-based data visualizations. We chose to work with datasets from two different projects developed by the Center for Digital Humanities at Princeton University (where all of us worked at some point): Shakespeare and Company Project and Derrida’s Margins. We chose to work with data we helped create because we knew the content deeply and could “consider context” and offer an inside perspective. We brainstormed materials and techniques to present the complexities of our data, and then pursued ideas individually or in pairs. Eventually we settled on 3D modeling and printing, paper folding (origami and kirigami), and weaving. For each approach, we prototyped, experimented, and iterated, with regular group conversations and review, incorporating feedback and insights into revised prototypes or new approaches. Prototypes for the 3D model included a Lego version and 3D printed rectangles of varying heights; then we tried a 3D lollipop chart (generated programmatically from the data using Python and Blender), and discovered it gave significantly improved visibility to data points obscured by the other models. The weaving was not only tactile, with a variety of textures; when displayed in person, it is presented as an interactive, in-progress piece that visitors can contribute to, highlighting the laborious and repetitive aspects of working with data, which are too often invisible. Writing up the project for publication in the experimental journal Startwords gave us the opportunity to articulate the theories behind our work, situating it in the context of critical making, data feminism, and non-textual scholarly and interpretive objects. The work is also informed by feminist philosophy on the intimacy of touch, in contrast to the false sense of objectivity that can be conveyed by sight. Publishing in an online journal about objects meant to be touched, held, viewed from different angles, and woven made for a strange challenge; our response was to provide interactive 3D models, deep-zoom images, and instructions for others to recreate our objects (for the three objects where permissions allowed). One of the most empowering aspects of this project is how practical and accessible these objects and techniques are; most of the materials and tools we used are readily available or inexpensive to buy, and the techniques are not difficult to learn.