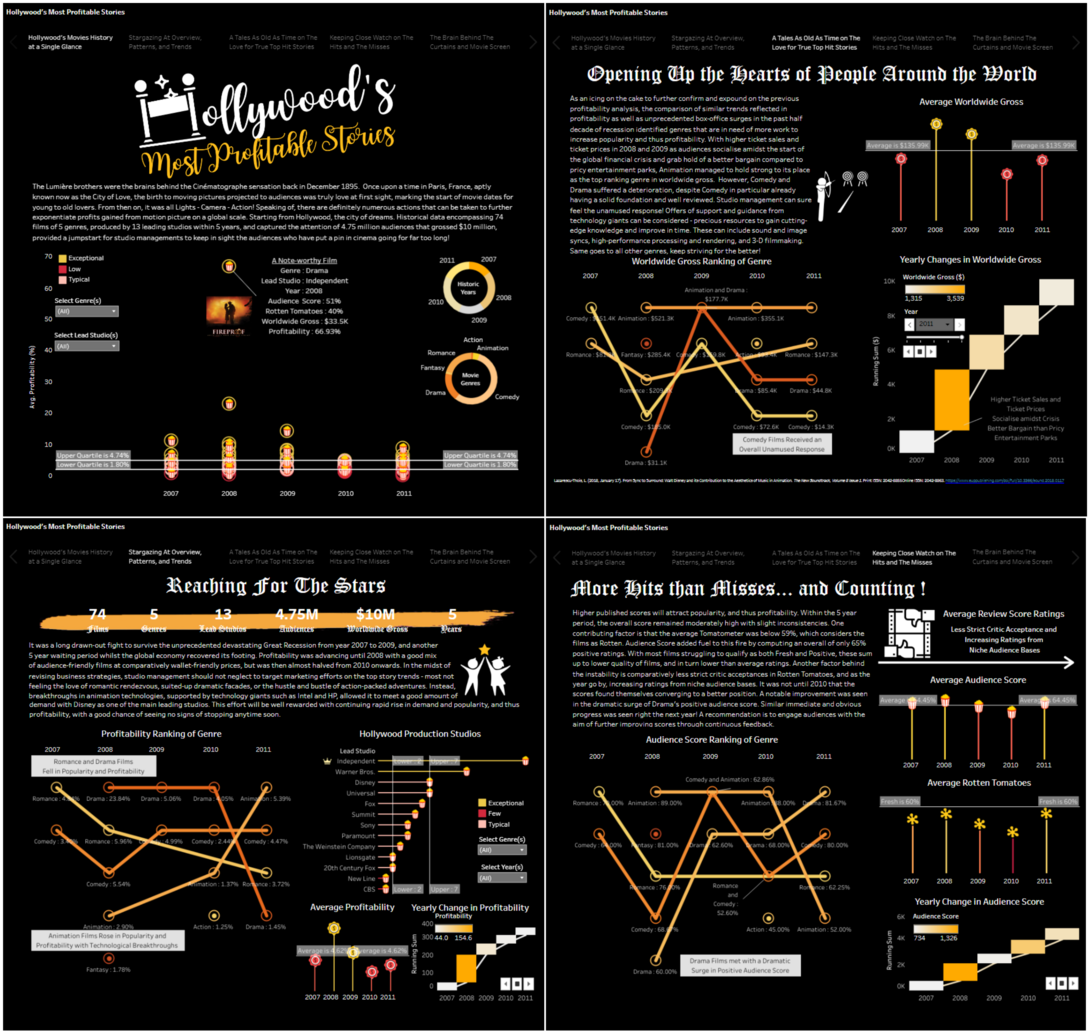 Behind The Scenes : The Hollywood Story by Taylor's University

Once upon a time in Paris, France, aptly known now as the City of Love, the birth to moving pictures projected to audiences was truly love at first sight, marking the start of movie dates for young to old lovers.
From then on, it was all Lights - Camera - Action! Starting from Hollywood, the city of dreams. Historical data encompassing 74 films of 5 genres, produced by 13 leading studios within 5 years, and captured the attention of 4.75 million audiences that grossed $10 million, provided a jumpstart for studio managements to keep in sight the audiences who have put a pin in cinema going for far too long!

Reaching for The Stars…
It was a long drawn-out fight to survive the unprecedented devastating Great Recession from 2007-2009, and another 5 year waiting period whilst the global economy recovered its footing. Profitability was advancing until 2008 with a good mix of audience-friendly films at comparatively wallet-friendly prices. In the midst of revising business strategies, studio management should not neglect to target marketing efforts on the top story trends - most not feeling the love of romantic rendezvous, suited-up dramatic facades, or the hustle and bustle of action-packed adventures. Instead, breakthroughs in animation technologies, supported by technology giants such as Intel and HP, allowed it to meet a good amount of demand with Disney as one of the main leading studios.

Opening Up the Hearts of People Around the World!
Unprecedented box-office surges during the recession were observed in terms of higher ticket sales and ticket prices in 2008-2009 as audiences socialise amidst the start of the global financial crisis and grab hold of a better bargain compared to pricy entertainment parks, Animation managed to hold strong to its place as the top ranking genre in worldwide gross. However, Comedy and Drama suffered a deterioration, despite Comedy in particular already having a solid foundation and well-reviewed. Studio management can sure feel the unamused response! Offers of support and guidance from technology giants can be considered - precious resources to gain cutting-edge knowledge and improve in time. These can include sound and image syncs, high-performance processing and rendering, and 3-D filmmaking.

More Hits than Misses… and Counting!
Higher published scores will attract popularity, and thus profitability. Overall score remained moderately high with slight inconsistencies - one contributing factor is that the average Tomatometer was below 59% and thus Rotten. Audience Score added fuel to this fire by computing an overall of only 65% positive ratings. With most films struggling to qualify as both Fresh and Positive, these sum up to lower quality of films, and in turn lower than average ratings. Another factor behind the instability is comparatively less strict critic acceptances in Rotten Tomatoes and increasing ratings from niche audience bases - a recommendation is to engage audiences through continuous feedback.

Hollywood is on the right track to bask in the spotlight of success!