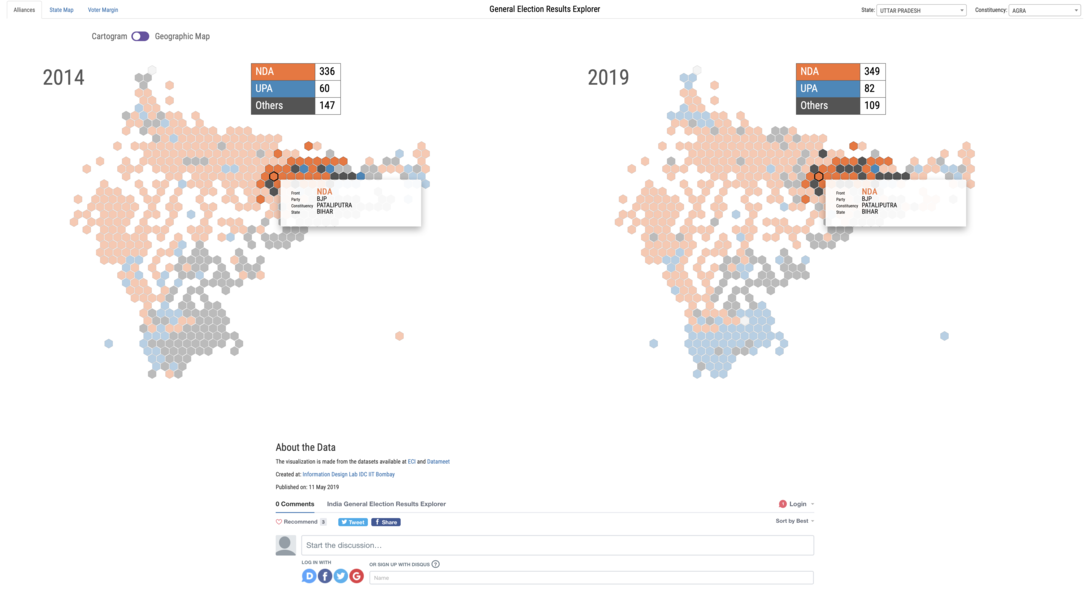 India has the biggest democracy in the world with 543 constituencies, each having fierce competition among the national as well as the regional parties. In 2019, more than 600 million people voted in the general election across the nation. To aid visual analysis on this vast data, we created an online interactive tool which allows for an exploration of how political parties have performed in the past 5 elections. Our tool provides a seamless and interactive experience by visually bonding different elements through their attributes and animations.

From the data obtained from Election Commission of India (ECI), we categorized the data into three critical dimensions: year of the election, the constituency and its geographic location, the parties which contested elections.

Our visualization consists of three sub-visualizations, each giving a unique insight into every dimension of the data:

Alliances:
A meta level visualization of how major political alliances have performed in the entire nation. We represent the geographic map using a gridded cartogram to prevent the area bias of map presentation, in which the user is misled to associate the color of the geographic area with the data when it's not. Since cartograms are not very popular in Indian media, we expected that people not exposed to gridded cartogram will not be able to understand the visualization. Hence we have provided an option to switch between the cartogram and geographic map.

State Map:
An in-depth visualization of parties performance in different constituencies of a state. A tooltip in rollover provides additional information about the winning parties in different elections.

When a constituency is clicked, the tooltip reveals an in-depth analysis of the top 5 parties in every election through a rank map. The rank visualization gives a way to track the performance of a single party across all years.

Voter Margin:
A visual analysis of how dominating was the winning party in a particular constituency. We defined the success of their performance with the difference of votes between the winning party and the runner party, also known as "voter margin". In some constituencies, the difference in votes may be high due to the higher population in that constituency. Hence we also provide an option to toggle the data from raw votes to the percentage of votes which normalizes the effect of the higher population in that particular constituency.