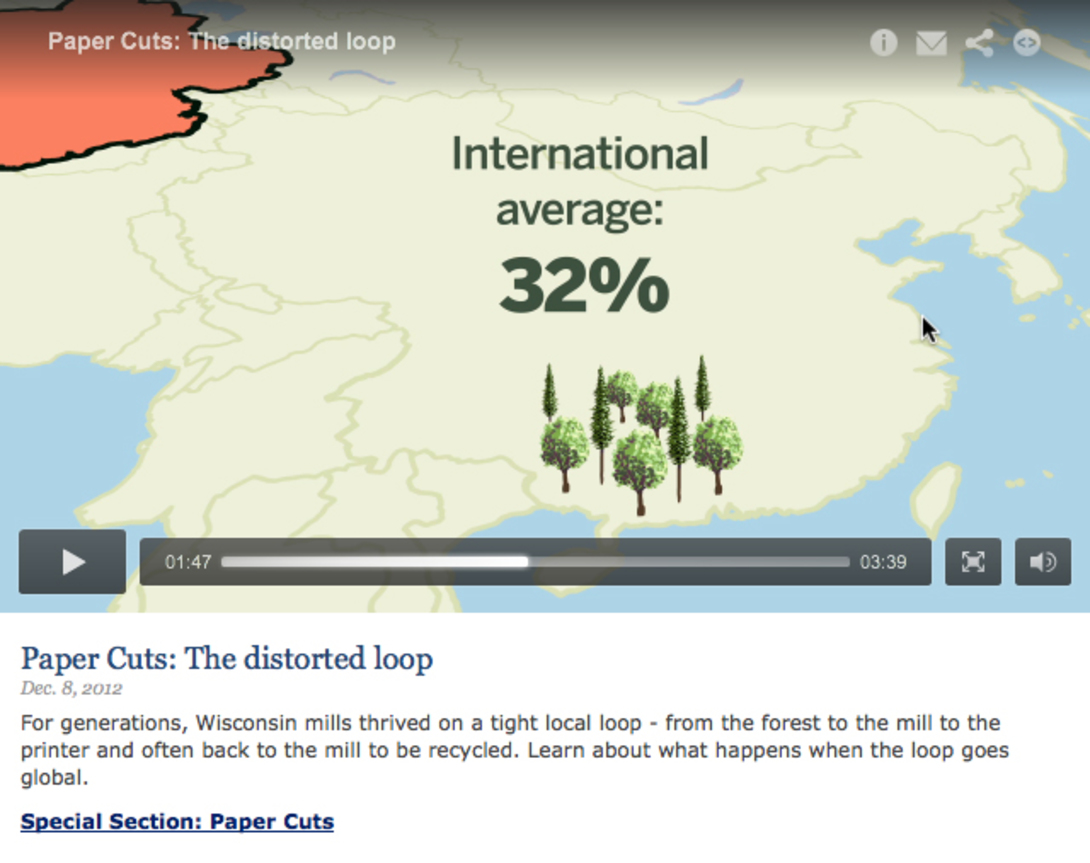 Many of the defining forces of our time â€” the rise of the digital age, the globalization of the economy, the decline of American competitiveness â€” can be understood through one simple thing: a sheet of paper.

If that paper came from Wisconsin, the nation's top papermaking state, it is the product of a tight, local economy that has supported families and sustained communities for 150 years. The industry was built on the state's lush forests and rushing rivers, on the pride of fine craftsmanship and the power of constant innovation.

Wisconsin mills launched the mass production of glossy paper and with it the rise of magazines. They created carbonless paper, pioneered strides in recycling, established the practice of renewable forestry. For generations, they produced paper for Bibles, best sellers. That led to a powerful sister industry â€” commercial printing â€” and the spinoff of household products, from Kleenex to disposable diapers.

But that sheet of paper may no longer be from Wisconsin â€” or even the United States.
It is now possible to cut down a tree in a Wisconsin forest, ship the pulp 3,000 miles around the world to China and watch it come back as high-quality paper that costs less than paper produced in the local mill.

How can that be?

That simple question drove the Milwaukee Journal Sentinel's “Paper Cuts” series, a masterful, multimedia look at the effect of global economics on one of the state's cornerstone industries. In print and online, through penetrating stories, stunning photos, compelling videos and innovative graphics, a team of journalists provided readers with an unprecedented look at how the paper industry, already battling the threat of computers and iPads, now faces a more potent one from a country with a severe shortage of trees.

The project took readers to the forests of northern Wisconsin to the boardrooms of New York hedge funds.

And it took readers â€” for the first time â€” inside China's relentless drive to become the world's biggest paper power. After tripling production over the last decade, China has surpassed U.S. production and can now match the annual output of all of Wisconsin's mills in the span of three weeks.

The narrative lays bare the competitive position of the United States in a stark and revealing way.
The “Paper Cuts” project is especially noteworthy for its cross-platform approach, one that is a model for today's multimedia journalism. The team â€” including interactive designer Emily Yount, graphic artist Lou Saldivar and designer Nick Lujero â€” told each piece of the story in the manner best suited for doing so, without forcing them into conventional, print-driven formats.
A look at the distorted economic loop became a motion graphic. The history of the industry became an interactive map, connecting local changes to global trends. The print vs. digital comparison became an online carbon calculator.