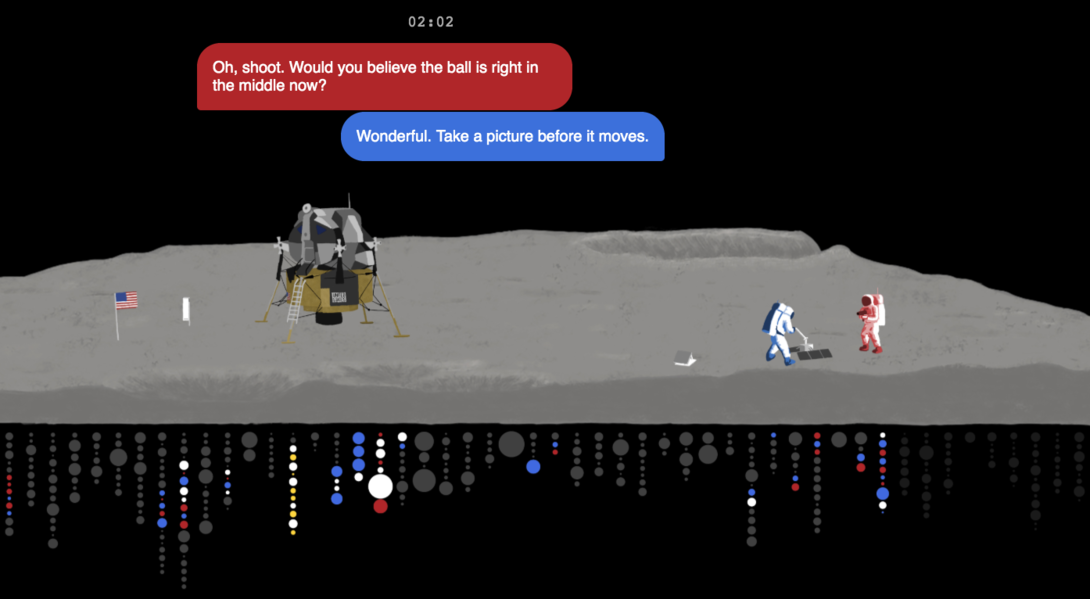 Neil And Buzz Go For A Walk by RJ Andrews

Neil And Buzz was motivated by a realization: I had no idea what happened on the Apollo 11 moonwalk beyond Neil’s "one small step." How many walks were there? How long were they out there? How far did they explore? What exactly did they do?

The interactive story conveys the scale – in both space and time – of the first moon landing. Scroll through highlights from the radio transcript like a messaging app. A perspective map changes in step to show the action. The story begins at the moment the Lunar Module hatch opens and ends when the hatch closes. Color distinguishes Neil and Buzz’s action and dialog.

Hand drawn illustrations help humanize the adventure. Too many looks at the history of space exploration are too cold—too machine. The story creates a relatable context for the Apollo 11 moonwalk by uniting a wealth of data resources in a way never before achieved. By story end, I hope the humanity of the Apollo 11 accomplishment resonates with the viewer.

Only a small portion of the moonwalk’s transcript is featured. My goal was to give a sense of the moonwalk that was accessible to many. I did not want to create a feature-length film or exhaustive interactive dashboard. Only the spiciest parts of the transcript stayed. The piece is a data story. It is edited for maximum effect.

The story is built on research that triangulates original Apollo documents. These include official maps, transcripts, photos, video, and reports. I constructed my spatial-temporal understanding of the moonwalk by buildling many planning documents. The Hasselblad photos are the data linchpin to this story. NASA has published where and when each photograph was taken. These snapshots can be matched to the transcript timeline and USGS maps.

Creating a custom interactive opened doors to a lot of fun. NASA media was included via new GIFs made just for this piece. If you missed them on first read, go back to the story and hover or touch the images embedded within the conversation.

The timeline below the moonscape shows a circle for each radio transmission. The circles are sized by transmission length (number of characters). Transmissions highlighted in the story are colored by speaker. Transmissions not shown in the story remains grey. At the very end of the story all the color rushes for the entire script. This gives a rough feel for how much everyone spoke.

The story ends with a short outro. This lets me share something learned during my research that I never knew. Neil and Buzz had a slumber party on the Moon!