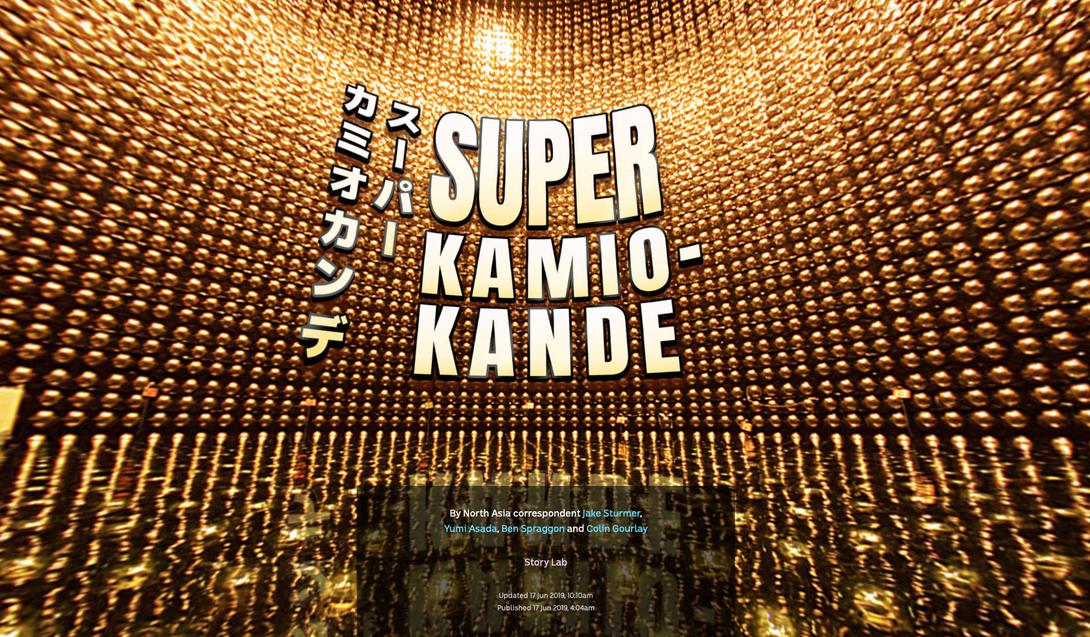 This stunning piece of digital journalism is the result of a successful collaboration between the ABC's Tokyo bureau and the Story Lab team here in Australia.
Super Kamiokande is a giant science experiment deep underground in Japan, searching for the origins of the universe by looking into the heart of dying stars.
When Tokyo correspondent/video journalist Jake Sturmer and producer Yumi Asada secured extremely rare access to the huge underground tank, they and the Story Lab team engaged in extensive planning to ensure that their one-hour of access resulted in a piece of digital storytelling that could do justice to this spectacular scene.
When the day came, Jake and Yumi had one shot to get this right - there would be no do-overs. Once lowered into the tank, they raced to capture it in photos and video using specialised equipment including a 360 camera and a Go-Pro. The colour of the massive lightbulb-like sensors was amazingly beautiful, and it was like nothing they had ever seen before. While snapping away, they wondered how could they capture this scale and convey the beauty of this place to the people who have never seen this?
Story Lab had a vision for the digital story which would use Jake and Yumi's imagery to its full potential, as well as inform readers of the complicated science behind the experiment in a way that was fully understandable to our audience.
The heart of this story's digital innovation is the use of the beautiful 360 imagery and video. The use of 360 degree footage allowed us to give the audience a sense of the scale of the space. We used complex 360 degree video production techniques to show the process of neutrino detection from within the space itself enhancing the sense of immersion.
We used a combination of open source technology and bespoke code to get the 360 content working in browser. In order to draw people's attention to certain points in the environment without asking them to alternate between reading the story and manually navigating the space, we implemented reading progress-bound events that automatically shift the camera’s focus & position, and execute seamless scene transitions.
The reading progress feedback was further utilised later in the story in order to step through an animated infographic, and allow the graphic to blend more seamlessly into the story’s canvas.
We used these simple and beautiful animated infographics to explain the scientific processes visually. This was so successful that the Victorian Space Science Education centre now uses the supernova explanation from the piece as a part of its teaching curriculum.
We started with a fascinating and complex story, used our rare access to capture original material in an innovative way, explained it with detailed yet simple-to-understand graphics and presented in an innovative new format.
Quote from one audience member on twitter- ‘7.15am, morning coffee, taking in the morning's headlines, dutifully, reluctantly. Secret lair, hmm. "This is a neutrino". Suddenly, awe and wonder. Brilliant work, all of you. Bravo StoryLab.’