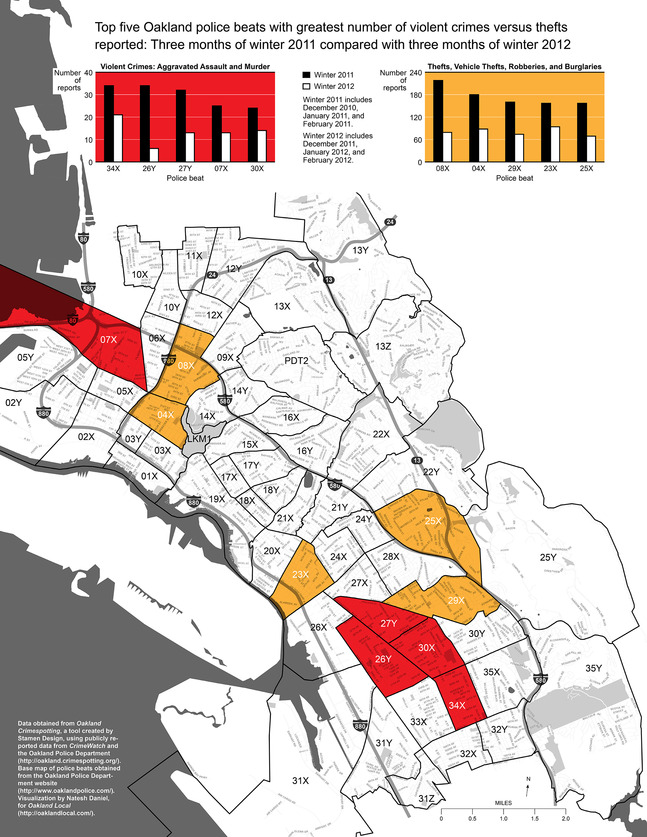 During the early part of 2012, the City of Oakland's mayor Jean Quan was claiming that 90 percent of the city's homicides and shootings occurred in 100 of the city's 6,560 blocks, and that a plan to direct police resources to these areas would essentially reduce violence citywide. Adding to the public's skepticism of this claim was the Mayor's refusal to name the 100 blocks or disclose the data on which she based the plan. Citizen reporter CB Smith-Dahl, of the local news blog Oakland Local, disputed this idea and hired me to help her engage in data journalism.

With the help of a web-based public data tool called Oakland Crimespotting, we were able to download nearly 40,000 crime records collected from CrimeWatch and determine if 90 percent of the homicides could be reduced to 100 blocks.

The data proved unwieldy and hard to sift through. It became obvious that the Mayor's claim was wrong but we couldn't provide a timely response. We took a two-step process to first identify where crime occurred, by police beat, and produced this map. A year-over-year comparison included on the map also indicated that crime rates were declining. Soon after we published this map on the Oakland Local blog, the nonprofit Urban Strategies Council issued a report challenging the 100-block plan data, saying that the city's most dangerous 100 blocks over the past five years accounted for only 17 percent of the city's crime, not 90 percent. They beat us to the second step.