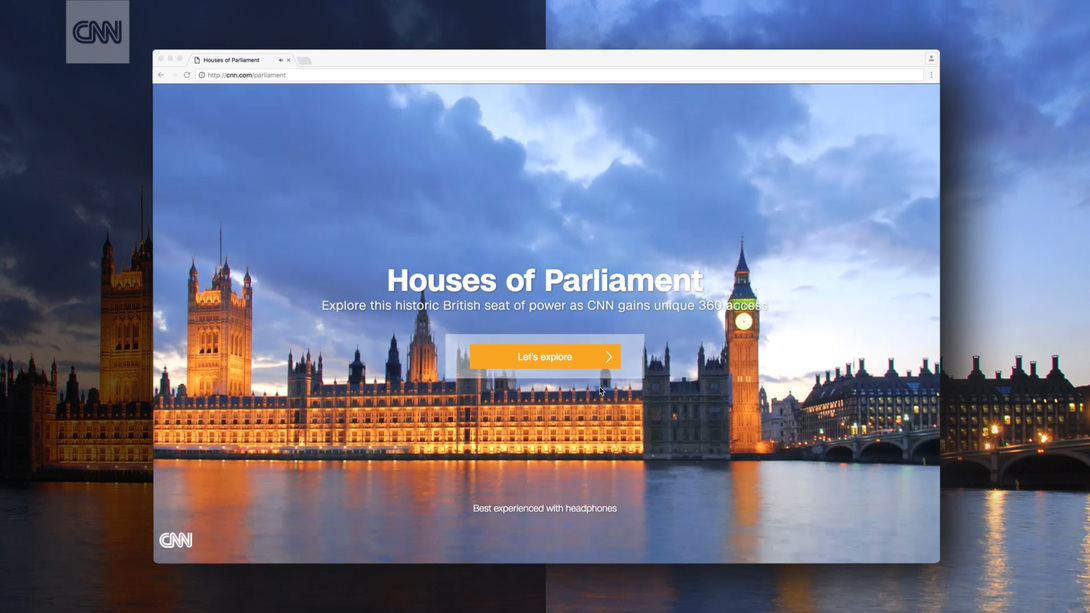 CNN’s Houses of Parliament interactive offers audiences a unique experience: the chance to step inside one of the world’s most iconic buildings in a purpose-built 360 immersive environment. Users get to stand under Big Ben as it tolls the hour, see the Robing Room where the Queen puts on her crown and gown before addressing joint sessions of the House of Commons and the House of Lords, and stand at the dispatch box where Theresa May faces her weekly grilling by lawmakers during Prime Minister’s Questions.
And those are just some of more than a dozen locations in the virtual reality interactive. CNN was also allowed to place 360 cameras in areas never open to the public.
Viewers can step into the climate-controlled Act Room, where 64,000 British laws are stored on parchment scrolls dating back 500 years; onto the roof to see views of the London Eye, Shard and Westminster Abbey; and into the basement, where miles of cables and pipes snake overhead with no known rhyme or reason.
The interactive offers much more than just a chance to look around: narration by CNN anchor Max Foster gives users the history and key facts about the building known as “the Mother of Parliaments,” while CNN digs pulls from archives so audiences can hear Queen Elizabeth deliver a speech and Tony Blair duel with David Cameron in the Commons.
And audiences can dig even deeper by clicking on the dozens of hotpoints scattered through the interactive, learning everything from the history of the Gunpowder Plot and the word “lobbying” to the myths and superstitions that haunt Parliament.
This purpose-built interactive is the product of more than a year of work that began when CNN spotted a rare opportunity to film throughout the Parliamentary estate. The complex is over 150 years old and is in dire need of major repairs. Lawmakers’ plans to renovate the building provided the news peg to open months of negotiations with the gatekeepers of the complex, ultimately resulting in unprecedented access to the site.
A team of editors, designers and developers led by Senior News Editor Richard Allen Greene and Lead Designer Sarah-Grace Mankarious spent nine months building the interactive, timed to release when Queen Elizabeth II delivered the Queen’s Speech to open the Parliamentary legislative session in June 2017.
With mobile-first design, the interactive launched with support from all CNN platforms, including a push across social media and a TV spot promoting the Digital product.