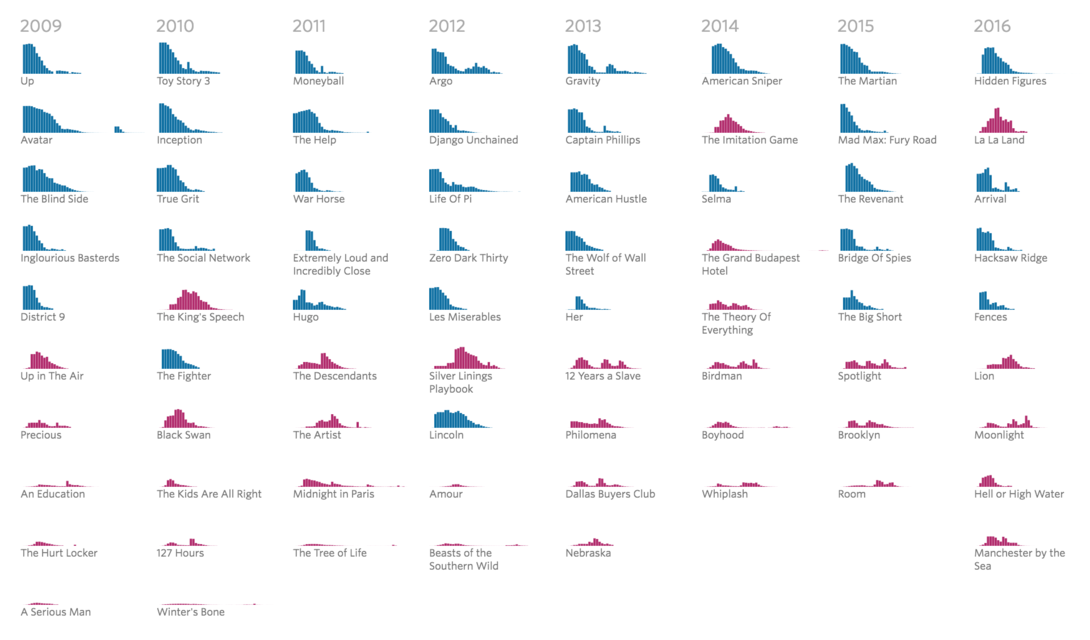 This project sought to introduce the concept of film release strategies to a broader audience and determine which formula is used most by Oscars Best Picture winners.

The two main release strategies, platform and wide, are concepts known by some film fans and industry insiders, but not to a larger audience. Previously, without a macro view of these release strategies, it was difficult to visualize the consistent patterns used by film studios across years.

Using clear data visualizations we created insightful, illuminating takeaways for readers. We had to be innovative in how we made a largely markets-focused audience interested in an entertainment story. The numerous charts and data-driven elements of this story made it easier to bridge that gap. We believe it created many 'ah-ha' moments because it is a concept that is relatable to millions of people, but is rarely visualized.

This project used modern data journalism and design tools (Scrollama.js, d3.js, and R) to let the data tell the story. The simplicity of a column chart and two main color choices allowed the reader to discern easily the patterns and meanings behind them.

We chose to present the data as "small multiples" so that we could achieve two goals at the same time: to easily highlight the patterns and insights we've identified in the data; and to give readers the opportunity to explore the full data on their own.

We believe we met the goal of illustrating these patterns and creating a quick takeaway for readers – 7 out of 8 Best Picture Winners used a platform release (this was later updated to 8 out of 9 after "The Shape of Water" won).