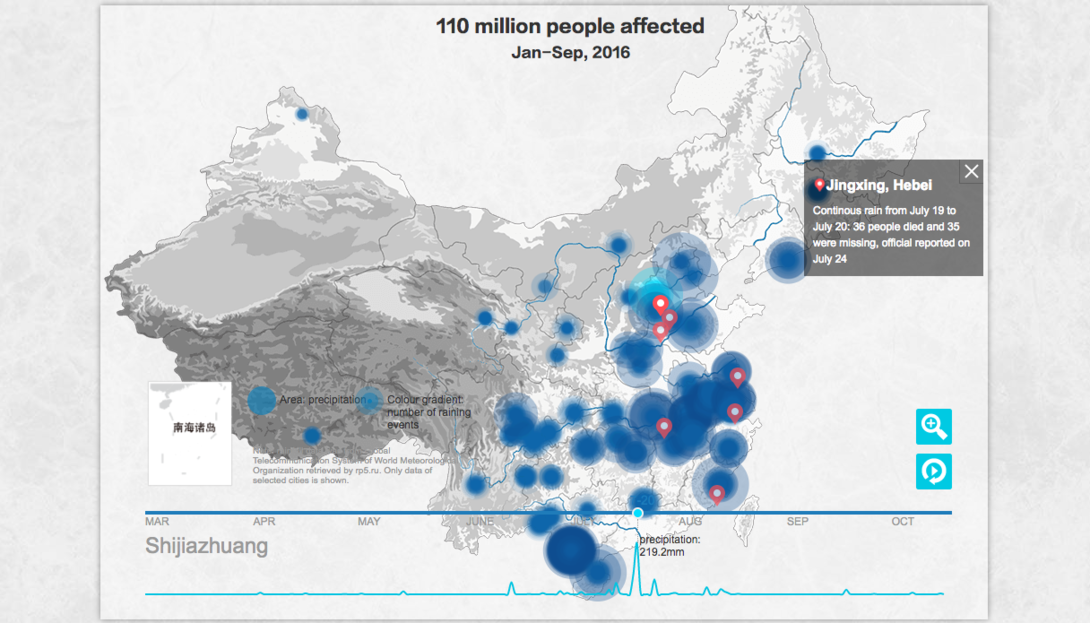 After the Flood: Never Let Bygones Be Bygones by Caixin Media Company Limited

In summer 2016, there were a series of massive floods in China, affecting more than ten million people and killing thousands across the country. In some regions of northern China, the loss was enormous. The public doubted if local officials had taken all precautions which could have prevented this loss.

This is a multimedia explanatory reporting with various dataviz and infographics. It discussed the human impact on the flood vulnerability of the environment as well as the changes that have to be made in disaster management and relief service in response to rapid urbanization. Scientific explanations on why China is vulnerable to flood hazards are also included.

Dataviz, Infographics and Other Elements:

1. Meteorological data from open data source is visualized on a map: on the rainfall map, each raining event in China is depicted as a simulated water droplet on a surface, with the diameter representing the precipitation amount and the colour gradient representing the frequency of rain in the particular district.

2. Historical data shown on graph to raise awareness: several data graphs included in the project to show that damage from flood disasters in China is extensive. And it should not be neglected in average years without massive flooding.

3. Virtual reality (VR) technology is used on the mobile version of the project, providing a more realistic representation of the flood event.

A series of human stories as a prelude: this project combines retrospective and explanatory reporting, with the interviews on the field after the flood as the beginning. The human stories and the voices of the flood victims deserve to be heard.

(Originally published in Chinese, then translated into English. Only Chinese version for the mobile version.)