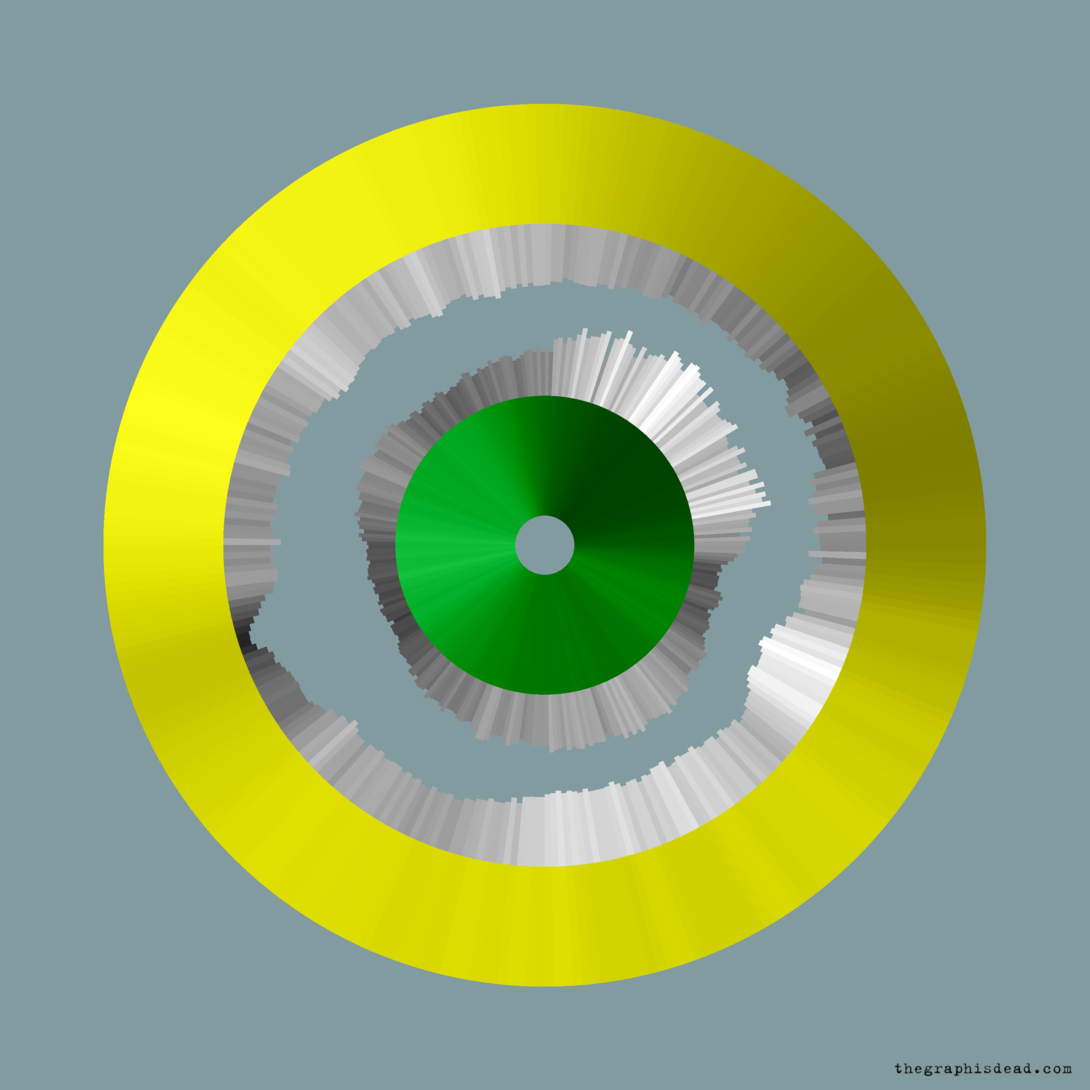 Uber and Cabs: Around The Clock by David Roberts

Preface: Why are using the same graphs that were invented in 1786? Science is necessarily methodical, and methodical can be slow. Like any slow process, the evolution and modernizing of the process is … even slower. And the world is evolving particularly fast where data is concerned. Data processing and storage is increasing exponentially, and science is falling behind. Today the truths we need are more complex and the arguments not so easily settled by a simple graph. My aims are to use the unrestrained nature of Art and its avenues of exploration to help convey some truths behind data. This hopefully frees the viewer to interpret the data in terms of its immediate impact but also aid a deeper objective contemplation and interpretation without an overpowering “message” preventing further understanding and hiding additional conclusions achieved by the viewer.

This project shows the time-of-day that Uber and Yellow Cab pick-up in New York between April and September 2014, and how Uber is (or was) catching up. There are 4.5 million Uber pick-ups (green) and 82.4 million yellow cab pick-ups (yellow) between April and September 2014. Each is shown as a ring on the image, the radius scaling with the total pick-ups with the lightness of color scaling with the number of pick-ups, all shown on the 24-hour clock. The bars between the rings show how Uber pick-ups are approaching the previously dominant yellow cab pick-ups. The difference in the first and last 3-month periods are displayed as the bars between the two rings – the longer/lighter the bar the larger the difference. As Uber pick-ups are increasing and yellow-cabs decreasing in all cases both sets of bars approach each other.

Pick-up locations are clearly a factor as shown in my other submission, however this image shows that the time-of-day is another strong factor. This image lends itself to a further understanding of how the balance of power might be shifting between the two means of transportation.

The image was inspired by Kenneth Noland who used target shapes painted on a bare canvas background to lift the image and give maximum intensity to the image. Like Noland, these rings suggest the ever spinning action of a clock, and the change in color as the numbers shift from day to night and the inclusion of the grey-scale bars between the rings lift the rings above the flat plane and also aides the viewer in interpreting the data on two planes.

The times between 6am and 9am show interesting behavior as the decrease in yellow cabs is at its strongest but the increase of Uber is not so strong which suggests, overall, that people are choosing other modes of transport for the summer. Walking and enjoying the sunshine.