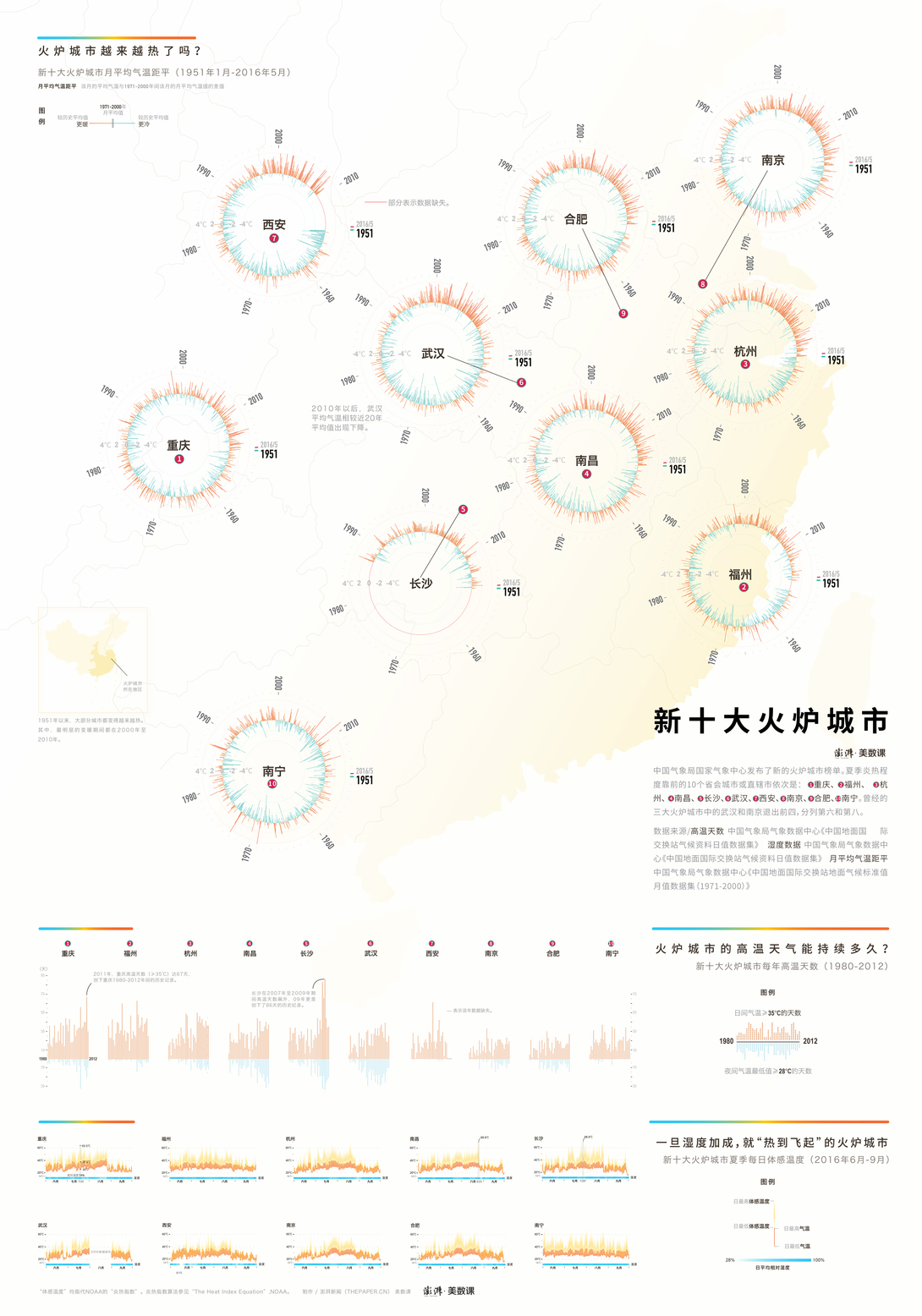 Many large cities in China, especially Chongqing, Wuhan and Nanjing, were traditionally known as “furnace cities”, suffer from long-lasing hot weather in summer.
In recent years, with the global warming and china’s rapid industrialization, the ranking of “furnace cities” has changed dramatically. And more and more weather records were broken. It is an impression that even the “furnace cities” were getting hotter and hotter.This poster visualizes how the top ten “furnace cities” were getting hotter, and how they were hot in different ways.
The upper part of the graphic shows the location of the top 10 furnace cities. Each one is with a circle chart , showing their monthly temperature anomalies (difference from 1971-2000 average) from Jan.1951 to May 2016. Orange line means the temperature is warmer than normal; Blue line means the temperature is cooler than normal. We found most of cities are getting warmer from 2000 and 2010.
The middle chart shows the number of high temperature days from 1980 to 2012. Each red dot represents a day with its daily maximum temperature exceeding 35 degree; Each blue dot represents a day with its daily minimum temperature exceeding 28 degree. For example, Chongqing have experenced 67 high temperature days(≥ 35 ℃) in 2011, setting a record during from 1980 to 2012. We also found that although some cities didn’t have long-lasting hot days like Chongqing, cities like Wuhan had the hottest summer nights, as they had more nights with their night air temperature exceeding 28 degree. This means people living in these cites hardly have a break from suffering hot weaves in summer.
The bottom chart The bottom chart shows the heat index(HI), air temperature and relative humidity of furnace cities from July to September of 2016. The red vertical line represents the actual daily maximum temperature and minimum temperature. The orange triangle area represents the heat index, which is an attempt to estimate the human-perceived equivalent temperature. The heat index is calculated with air temperature and relative humidity basd on the the heat index equation of NOAA. The gradient blue bar at the bottom represents the relative humidity, the higher the humidity is , the darker the blue is. For example, people in Chongqing might perceive a 63.5 degree temperature on July 20th in 2016. However, the actual maximum temperature of that day is 37.5 degree, with the relative humidity reached 74%. As most of top 10 "furnace cities" are in the southern part of China, which are usually humid, the levels of heat index of furnace cities in south are higher than their actual air temperature. Except for people living in Xi'an , the only northern city in Top 10 furnace cities. They are not feeling that much difference from the actual temperatures.