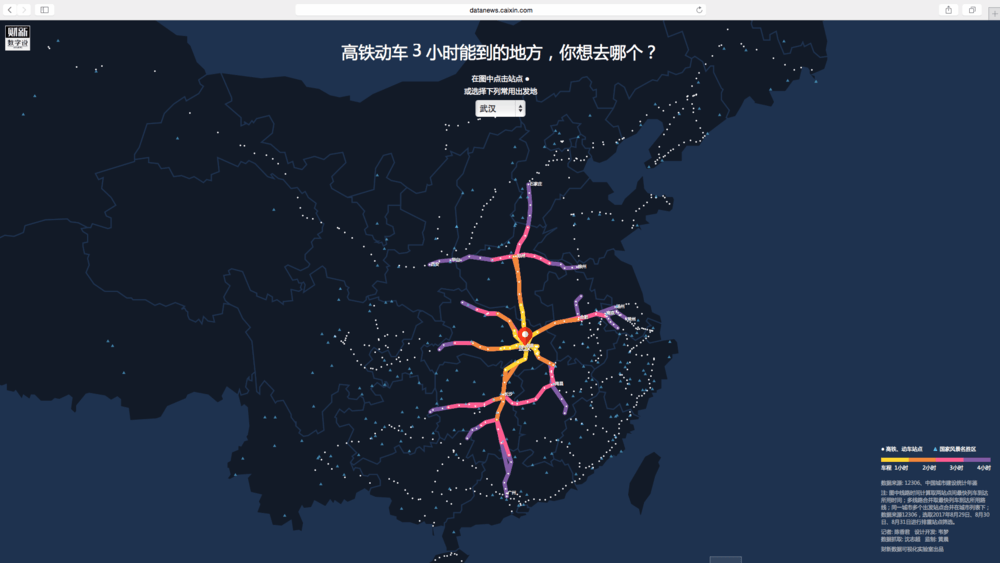 High-speed rail has developed rapidly in China in recent years. Its maximum speed has recently increased, to 350 kilometers per hour, and it has shortened the trip from Beijing to Nanjing to 3.5 hours. Therefore, high-speed rail has become the first choice for journeys below four hours (and even for longer trips considered the frequently-occurring flight delays). The existing map-based application or ticketing websites work only if people have decided both their departure city and destination. However, when it comes to choose holiday destinations, people are more concerned about the travel time and all reachable destinations within it are welcome. This project is to solve that problem.

The project: 'Those places High-speed rail (HSR) could take you to', is a visualized interactive map that shows high-speed rail lines within 1/2/3/4 hours from any picked city in China. For example, departing from Beijing, the map shows that the high-speed rail will take passengers to Tianjin within one hour, to Jinan within two hours, to Zhengzhou within three hours and to Nanjing within four hours, etc. It also shows famous scenic sites along the railway. To develop this project, we used web crawler technology to extract data from the train timetables at 12306.com, the official railway ticketing website. Then we wrote functions that could calculate the travel time of any two stations and code it with programming language d3.js. Finally, we designed this zoomable interface which shows results with simple and elegant data visualization. In addition, in the mobile version the departure station will be automatically chosen according to the device’s current location.

The project is both useful and educational. Not only being a powerful tool to choose travel destinations, it also demonstrates interesting geographic and economic knowledge of China. For example, more developed cities have more high-speed railway lines. And if you look at the southeastern part of China, lines are much shorter than in other part, meaning that the train cannot travel as far within the same time, and this makes sense because it is a mountainous area. Making it simple but informative, our goal is to let our readers spend more time to play around with the map, get their problems solved, and leave with interesting findings.