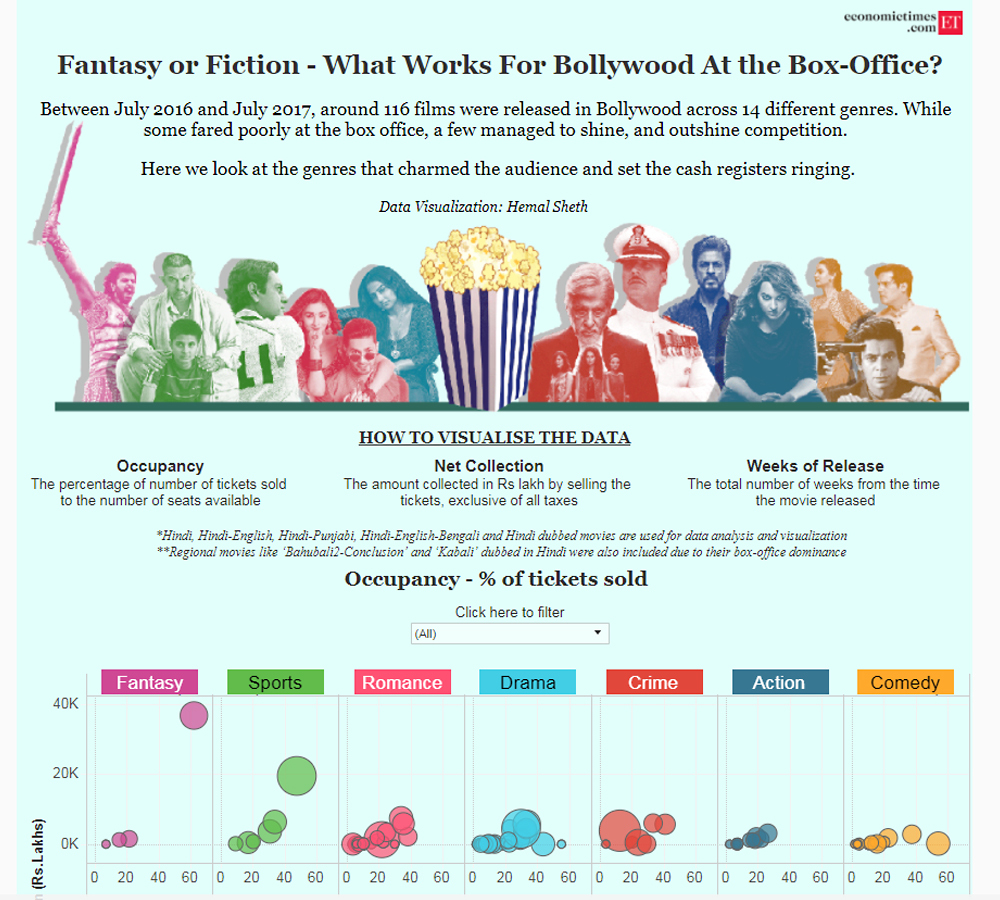 Fantasy or Fiction - What Works For Bollywood At the Box-Office? by Economic Times

The past few years have seen a steady increase in the number of multiplex screens in India. Apart from the mainstream big-budget movies, Bollywood has been evolving and producing experimental films in different genres, in response to the demands of multiplex audiences. Between July 2016 and July 2017, around 116 films were released in Bollywood across 14 different genres. While some fared poorly at the box office, a few managed to outshine the competition.

Here we look at the genres that charmed the audience and set the cash registers ringing.

If we look at the box-office numbers closely, it's clear that the year belonged to fantasy. SS Rajamouli's magnum opus 'Baahubali' laughed all the way to the bank, minting over Rs. 350 crores in 11 weeks.

In sports, the Aamir Khan-starrer 'Dangal', the second on the list, clocked Rs. 194.21 crores. This was higher than the combined net collection of Rs. 162.02 crores for 22 films across genres like Action and Comedy.

Bollywood's love for love stories continued through the year. Amongst the 21 films released in the Romance genre, 'Badrinath Ki Dulhania' was the most successful movie with the highest audience turnout. While Crime pipped Action when it came to selling tickets, Horror and Thriller films failed to thrill the box-office.

About creator:- Hemal Sheth
I am a Data + Visual artist. I like to interpret and create stories from data sets and to build interactive visualizations, following best visualization practice, which helps readers to understand, interpret, be informed and take decisions. My past experience was with newspaper and magazine media organizations creating infographics for news feature stories. After getting into data visualization, I got an opportunity to work in Business Intelligence domain creating dashboards. I've now spent over a year working with Economic Times (digital division) on Data Driven Stories. I use Tableau to create interactive data visualizations on various financial and economy driven subjects.