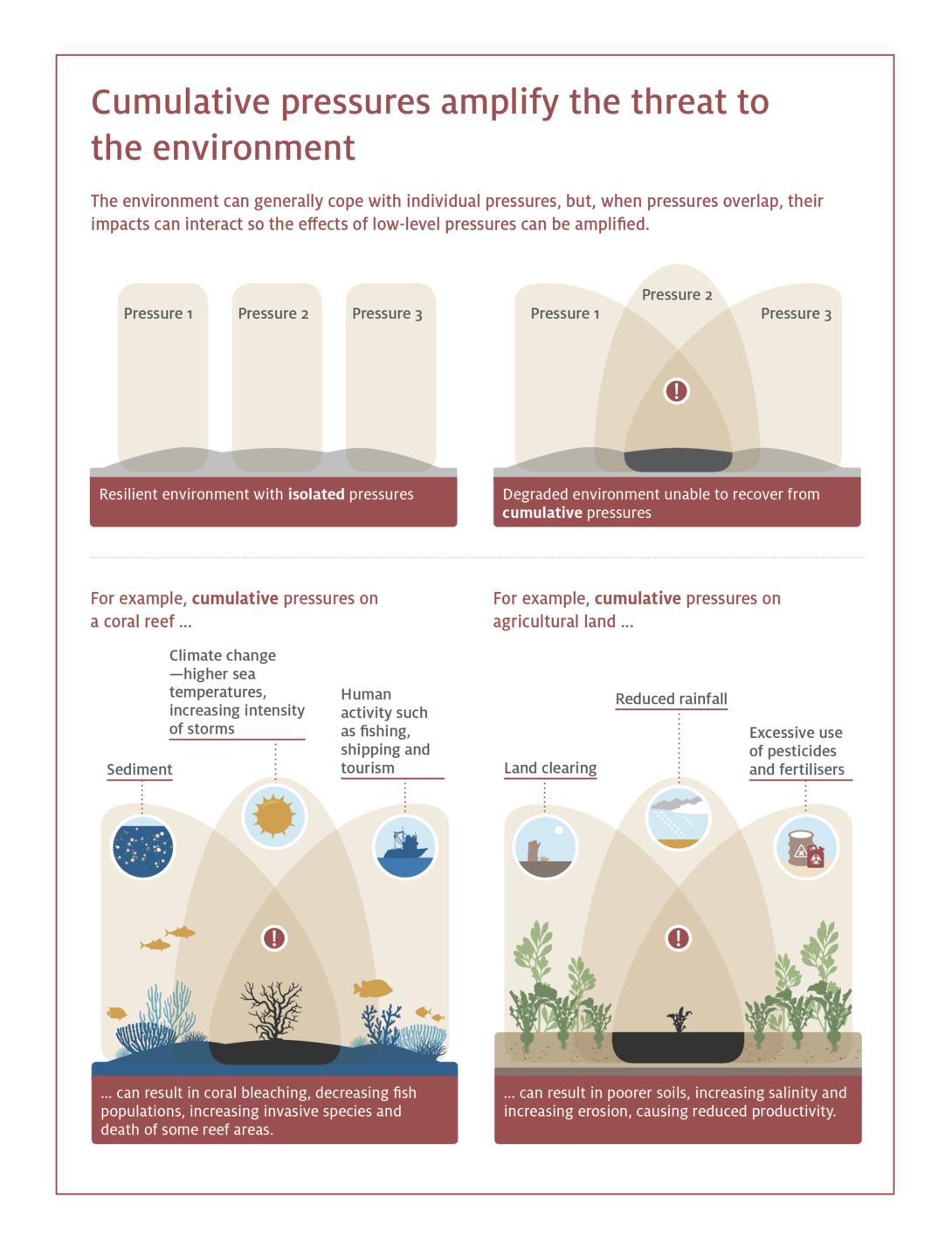 State of the environment reporting is a vital process and resource in environmental management. In Australia, the report is prepared every five years by an independent team of expert authors. The report examines various aspects of Australia’s environment; the impacts of current pressures and management approaches; and the outlook for the future.

Biotext developed a series of infographics to explain key ideas and complex concepts in the report. One of the key infographics we developed was about how cumulative pressures on the environment create a ‘tipping point’ beyond which an environment cannot survive or is permanently changed. In general, a single environmental pressure, such as sediment flow onto a coral reef, can be managed or simply survived. However, pressures start to accumulate and inter-react – for example sediment clouds water and higher temperatures place pressure on corals – the environment can degrade to a point of no return.

Together with the authors and our design team, we went through a number of ideas to generate the final solution, which was surprisingly simple. The visualisation uses a Venn diagram applied to the natural environment. We altered the traditional ‘circle’ layout for the Venn diagram, because the traditional layout generally creates a small overlapping center part, which creates difficulties in adjusting text to fit. We also wanted to provide physical examples of the environments, to contextualise the problem.

Once we had created the first concept in ‘Cumulative pressures amplify the threat to the environment’, we knew that it was successful because we could immediately see applications in explaining other environmental pressures. The central Venn concept was therefore used in various ways in the report to explain issues facing particular environments.

For example, the cumulative pressures on giant kelp forests infographic summarises a key pressure on marine environments. Kelp forests are a vital marine habitat. These forests are already under pressure from natural pressures, such as sea urchins which eat kelp and variations in sea temperature which influence where kelp can grow.

Kelp forests have adapted to cope with a balance of these natural pressures. But human activities add new pressures and exacerbate the current pressures, such that the cumulative effect is the destruction of the original environment and the creation of ‘urchin barrens’.

Similarly, in the coastal infographic we wanted to show how the cumulative effects of climate change (including sea level rise and increased storm frequency) interacted with population growth and development to ‘squeeze’ costal environments.

Each infographic was developed together with the chapter authors and the Australian Government Department of the Environment.