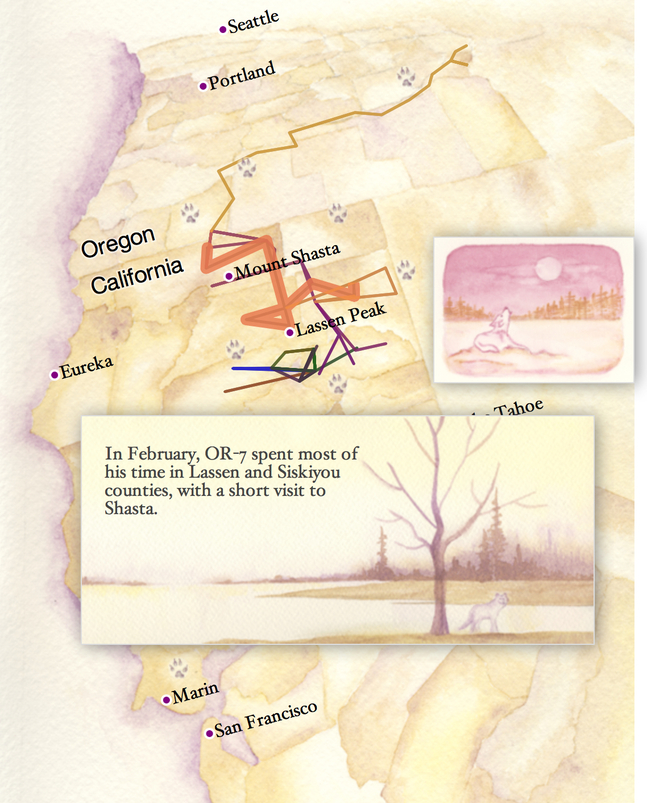 A Journey with OR-7 by Elijah Meeks

OR-7, also known as "Journey", is the first wolf back in California in nearly a century, and his whereabouts have been tracked via tracking collar. This interactive map shows where he travelled during 2012.

You can mouse over the route sections to see which counties in California and Oregon he spent time in during each month of 2012. You can also click on the wolf paw prints to see a vignette image evoking some of his experiences. As a bonus, if you click on the paw print by Marin, you can meet Aqutaq, an arctic wolf raised in captivity as a wolf ambassador.

The map is watercolor painting based on a satellite projection of the Pacific Northwest. The vignettes and paw prints are likewise watercolor paintings in the same style and palette. The route data is derived from purposefully ambiguous (for his protection) reports of OR-7's location as provided by California Department of Fish & Wildlife. The routes and landmarks are overlaid using the same satellite projection via the D3.js library to provide interactive functionality.

This "small data" project contrasts with the traditional GIS-driven maps of OR-7 available through various wildlife agencies and focuses more on sharing a narrative of the travels of this wild animal while still providing accurate geography.