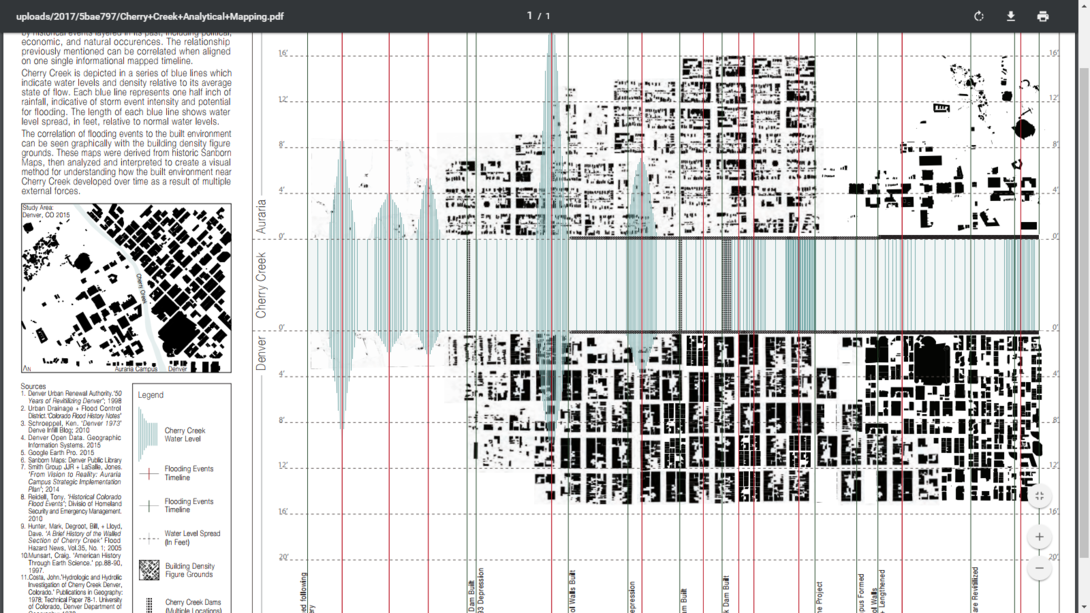 Multiple time lines represent a layering of forces, actions and reactions that shape the identity and character of a place both physically and experientially. In order to successfully plan for the future, a clear and accurate understanding of current and historic data is an essential tool that helps inform decisions. Visual representation of composite information allows us to relay and understand complex data across
multiple time lines and sources. It has the ability to identify the trends and patterns that result from forces, actions and reactions over time while also enabling predictions for future patterns.
Denver, Colorado’s built environment has changed significantly from its beginnings in the late 1800’s,
The original settlement area was situated near the Cherry Creek and South Platte confluence, which provided
life-sustaining water sources. Over time, multiple forces such as natural flooding events, cultural shifts, economic swings and technological advances have physically manifested themselves on the surrounding area. The data collection, research, and analysis of this information is visually represented in the form of a simplified, mapped time line that depicts how these interactions may have affected each other.
To better understand the relationship between elements, graphic representation of data has been interpreted, simplified and overlaid. Cherry Creek is depicted in a series of blue lines which indicate water levels and density
relative to its average state of flow. Each blue line represents one-half inch of rainfall. As the density of the blue
lines increase on the map, they become indicative of storm event intensity and potential for flooding.The length of each blue line shows water level spread, in feet, relative to normal water levels. Along with the flooding events time line, a historical events time line is superimposed to show significant points in time that were
also influential. Dams and flood control techniques are graphically represented on the map, correlating to the
year they were built as well as their thickness and strength. The combination of flooding and historical events’
affect on the built environment can be seen with the building density figure grounds. Figure grounds were derived from historic Sanborn and GIS maps. Flooding data was obtained from a multitude of sources, including scientifically recorded data as well as records of personal accounts of flooding. All sources utilized for this map were analyzed and interpreted to create a visual method for understanding the change over time in density, massing and the patterns of Denver’s buildings on each side of Cherry Creek within the study area.