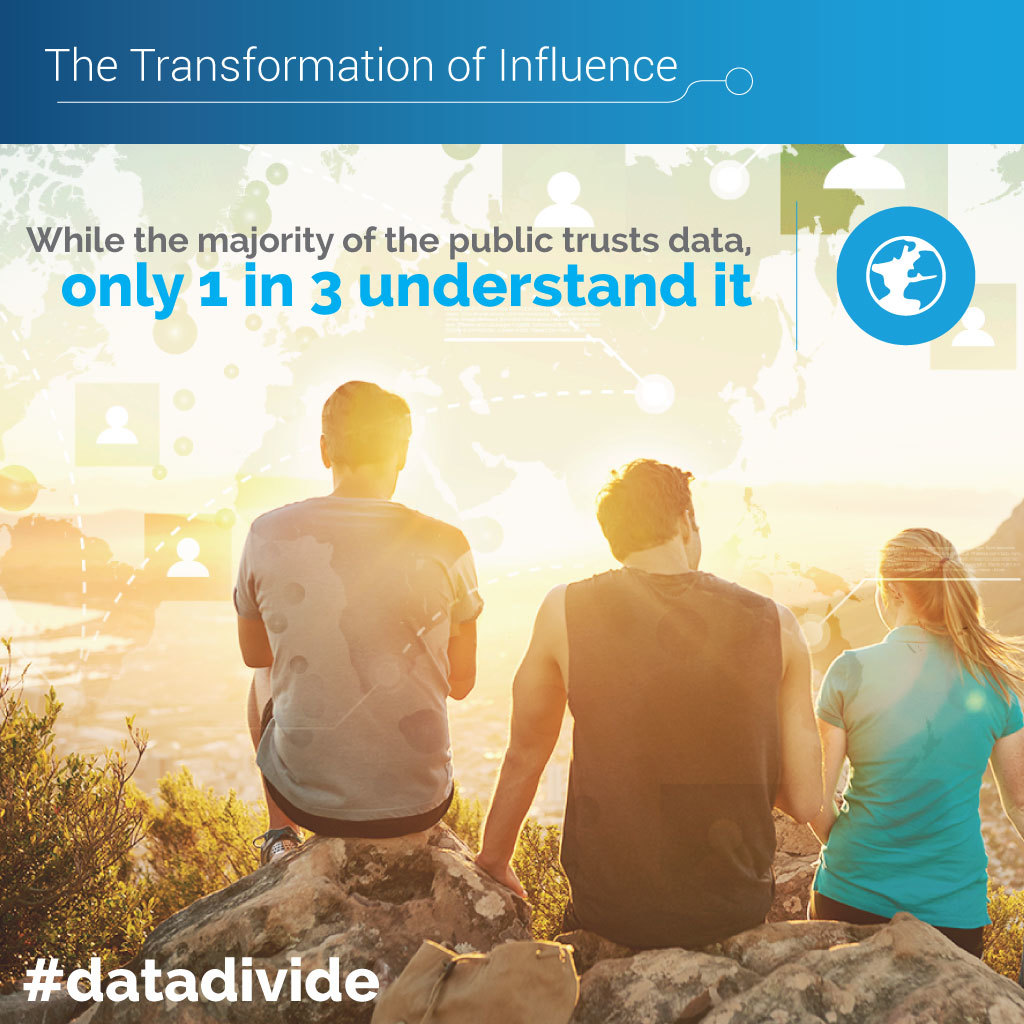 The Data Divide: 2 out of 3 people are data illiterate (and why you should care) by Hill+Knowlton Strategies

The majority of Americans state that they trust data and are persuaded by claims supported by it. Yet, only one-third of the public is data literate. This creates a gap between the individuals becoming part of a new class of influencer — one whose power comes from data – and others who trust data without ever understanding it. The data influencers have the potential for more power than any previous generation of influencers.

The Transformation of Influence: How Data is Changing Attitudes and Decisions, is a comprehensive study of how longstanding mechanisms of influence are being disrupted by data, and how data impacts influence. This research is based on over 4,000 public interviews conducted in 2016 that were obtained through a 128-question online survey designed by Research Data+Insights. Through this report, Dr. Peter Zandan, Global Vice Chairman at Hill+Knowlton Strategies, and David May, Corporate CMO at AIG, present innovative and actionable recommendations on how corporations can use data effectively to communicate with the public.

Data is growing in influence for several reasons, including the rising availability of data, the reliance on the Internet for knowledge, and flourishing opportunities for connectivity and personalization. As a result, data is becoming a driving force in decision-making. The public is increasingly turning to data to decide anything from what news sources they should trust to whom they should vote for. Data is no longer just a collection of numbers on a page—it is a form of influence.

This research revealed an American public divided into four categories with respect to data. The first are the “data literate,” who self-reported an understanding of data in which conclusions can be drawn but without advanced statistical skills. The “data-savvy” audience is a subset of the literate who have participated in three to seven data-intensive projects in the past year. They are far more likely than the general public to rely on data when making decisions. “Data-influencers” are a subset of the data-savvy – just 6 percent of the population – who are both data savvy and also active in their communities, giving them the power to influence. Two-thirds of Americans, however, fall into the fourth category – the “data illiterate” – who do not meet the benchmark of data literacy.

While there is no one answer to bridging the data literacy gap, a three-pronged approach will help communicators meet the appetite for data-based storytelling across varying levels of data literacy. The first is to tell a data-based story to engage the data-savvy audience, coupled with an anecdotal side to appease the general public. The second is to identify the target audience and tailor the relevant data to their level of expertise. The third is to think in terms of data throughout the communications process.

One thing is clear about the implications of this research: Leaders in data-based messaging are three times more likely than stragglers to report a competitive advantage—74% vs. 24%. They are almost three times as likely to report revenue growth—56% vs. 20%. As digital tools become more and more entwined with everyday life, organizations will benefit from strengthening how they think about and use data to communicate across audiences.