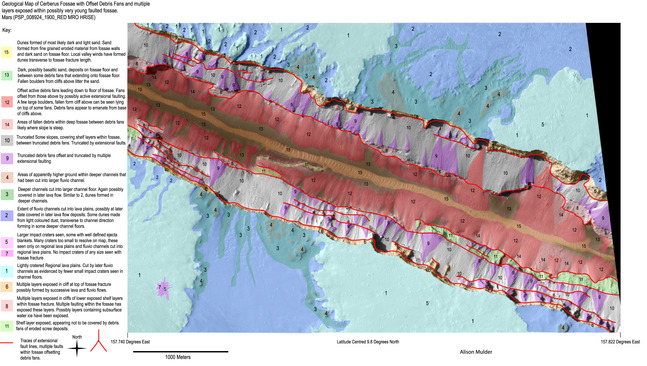 The Cerberus Fossae are a set of west-north-west trending fractures that cut across the Cerberus Plains on Mars. The Cerberus Plains are located approximately between 1550 E and 1800 E and between the equator and 110 N. To the NW is Elysium Mons, to the S is the Medusae Fossae Formation and to the NE is Amazonis Planitia a section of the northern plains of Mars. This area of Mars has been identified as youngest volcanic plains on Mars. It has been suggested using crater counting methods that the youngest lava surfaces are less than 10 million years old.
Mars Images for this Geological Map was obtained from Mars Reconnaissance Orbiter HIRISE QLOOK images by zooming in and selecting specific areas of interest within the images in the high resolution IAS viewer and then saving the current view to a .jpg file. The .jpg files were then loaded into Adobe Illustrator 9.0 where geological units, faults and features of interest could be mapped by overlaying the images with transparent colour and text. Each colour unit was numbered for clearer location within the geological map from the key. This image is part of a series of 14 maps using HIRISE images as a base. Additionally all maps have also been overlain on a Google Mars Data Elevation Model and using the .kmz file created the user can explore the area themselves in 3D using the navigation features in Google Mars. A PDF file containing all 14 maps can be viewed using the URL in this submission.
Evidence has been seen of graben spreading, sharp edges to Fossae Fractures and debris flows associated with faulting. Multiple fault traces were seen within some fractures with truncated debris fans showing fault plains. Faulting also appears to have a directional component as well as vertical to it and further work needs to be carried to measure changes in the directional component.