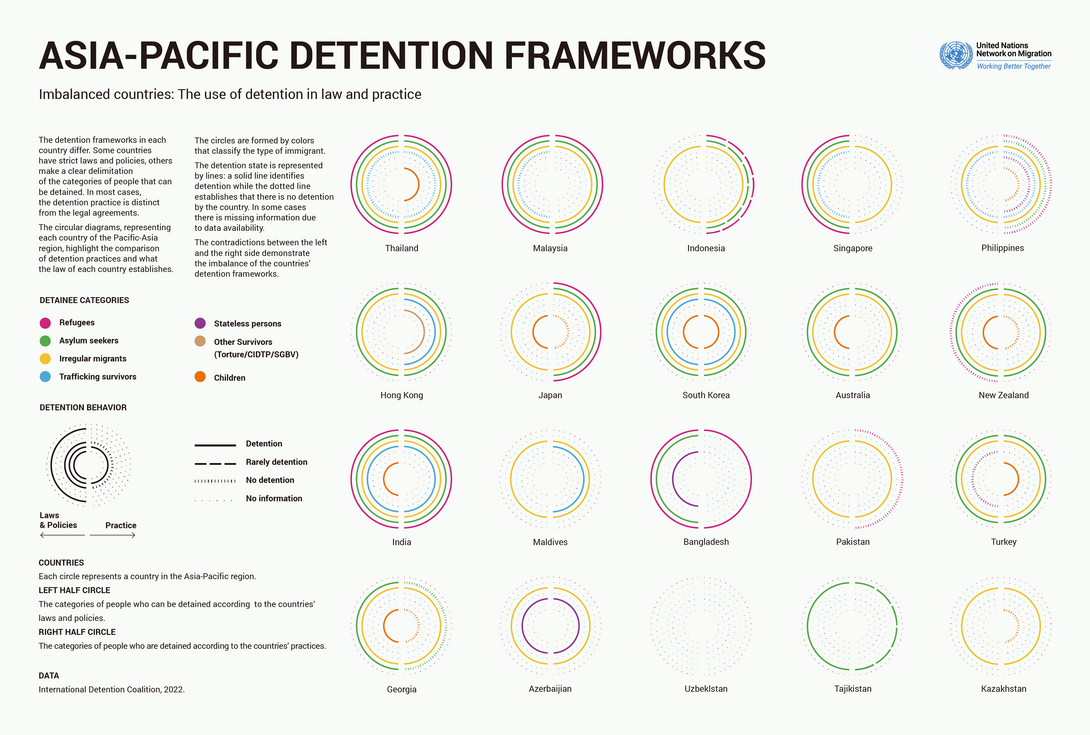 In this student collaborative project we responded to a brief set by the Immigration Detention Coalition (IDC). The team at the IDC wanted to work with data they had collected about alternatives detention for migrants, developed during national COVID lock-downs. Their aim was to engage policy makers with the alternatives to detention available and highlight how they might implement these in their particular context. Our group was tasked with creating a visual comparison between the laws, policies and practices in the countries included in the research. The visualisations we produced are intended to be used for presentations and publications aimed at to government policy makers, the UN and civil society organisations, with the aim of promoting increased use of alternatives to migrant detention (and using the evidence-based comparison between governments’ laws, policies and practices to encourage “positive competition” between governments).

The circular diagram highlights the comparison of detention practices with national laws and policies for each 20 countries of the Pacific-Asia region.

Each circular diagram represents a country, which are formed by colours that classify the type of migrant, such as refugees, children, irregular migrants, etc. The change in scale between the left and the right side represents the imbalance of the countries’ detention frameworks. The left half or the circular diagram shows the categories of people who can be detained according to the country’s laws and policies, while the right half shows the categories of people who are detained according to the country’s practices.

The detention state is illustrated by lines: a solid line identifies detention while the dashed line establishes that there is no detention by the country. In some cases there is missing information due to the lack of availability of data and it is represented with a dotted line.

The posters display information of four countries’ information as an example: Thailand, Bangladesh, Philippines, and Turkey.