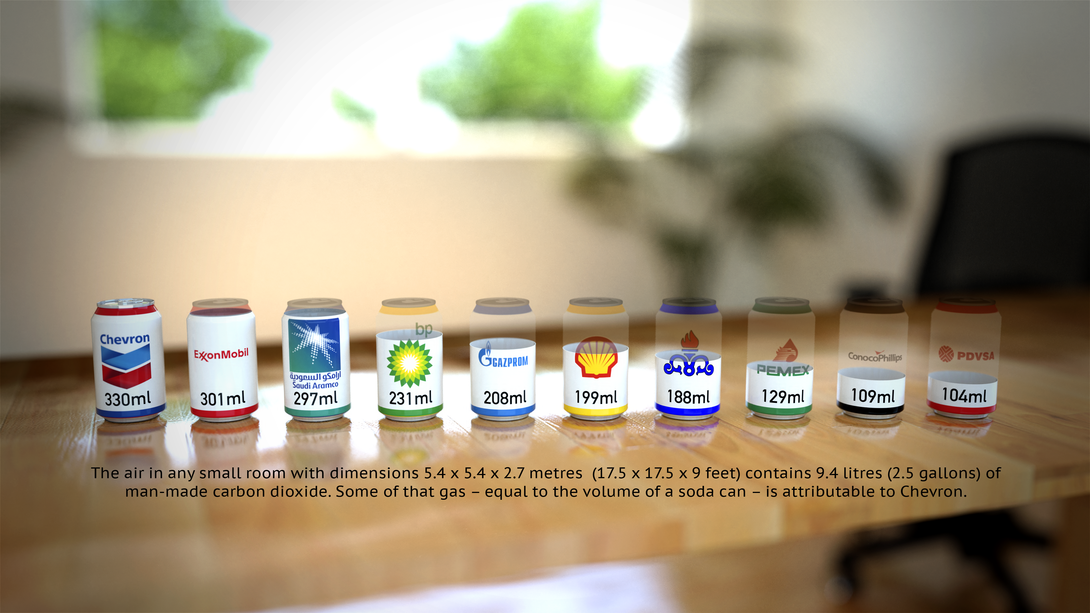 The Carbon Majors project (www.carbonmajors.org) is the culmination of eight years of combing through publicly available records about fossil fuel extraction from all across the globe and detailed analysis of the data. The project covers oil, coal, natural gas and cement production from the 1850s through 2010. The Report names the institutions responsible for extracting the oil, coal and gas that’s causing warming of the planet. Instead of allocating between countries, as has up to now been the case, any institution that produced more than eight million tonnes of carbon dioxide in any given year is identified in the study together with their cumulative contribution to the problem we all now face.

One problem with data like this is that it feels ‘unreal’ to people who are not already engaged with the issues. That is to say, it can be dismissed as just an intellectual exercise – just numbers. The main goal of this visualisation is to make the quantities real. We are talking about actual pollution that has affected the whole atmosphere, including the air we are breathing right now. Quantifying it in relation to the air in a real room gives viewers something concrete to relate to. Our package included conventional and novel ways to give a feel for the scale of the cumulative emissions involved. Amongst the visuals, perhaps most novel of all are the soda cans branded with well known names such as Chevron, Exxon, Aramco, BP and Gazprom which are presented as if filled – in the case of Chevron – or part-filled with carbon dioxide gas to show by volume precisely how much carbon dioxide is in a typical small room (5.4 x 5.4 x 2.7m at 400 ppmv concentration) as a consequence of these companies’ extractions.

The (true) claim in the visualisation is this: ‘in every small room, there is a soda can full of carbon dioxide that was supplied by Chevron’. That is a real and immanent way of conceiving the impact of the carbon majors, which communicates more to an unengaged audience than, ‘Cumulative emissions attributable to Chevron in 2010 were 51,096 MtCO2e’. Presenting the data this way challenges the idea that the human impact on the atmosphere is too small to worry about. It does this simply: by relating the numbers to people’s actual experience of being in a room.