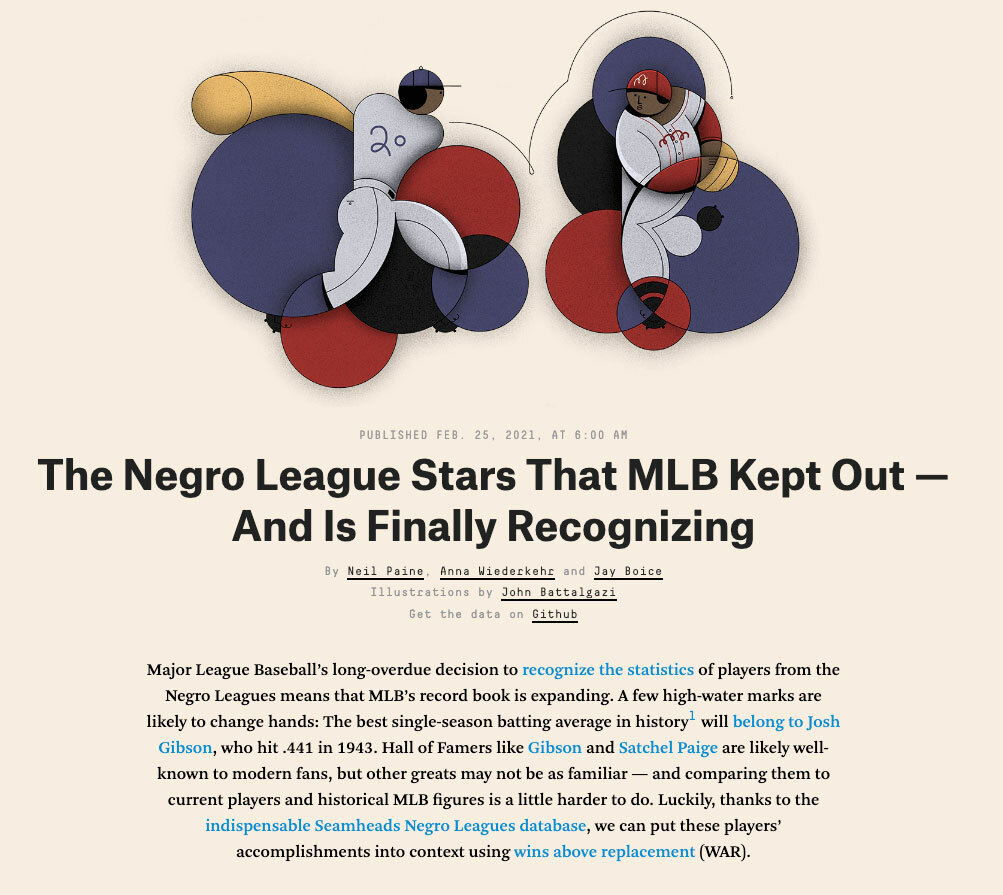 To create a fair comparison, FiveThirtyEight’s Neil Paine used wins above replacement (WAR) data from the Seamheads Negro Leagues database (https://www.seamheads.com/NegroLgs/) and adjusted for schedule length, putting stats from the Negro Leagues on the same scale of today’s 162-game season. Then, using a data visualization and a baseball card-inspired layout, we explored the accomplishments of the Negro League players in the context of modern baseball. (We published Paine’s data (https://github.com/fivethirtyeight/negro-leagues-player-ratings) on Github.)

The first beeswarm chart, which compares 1,200 Negro League players with current MLB players and hall-of famers, immediately shows the the comparison. The Negro Leagues featured hundreds of players that could have held their own with the greats most fans already know.

The rest of the page uses a card layout featuring a radar-inspired chart to compare five metrics against each other. For pitchers: strikeouts, control, ERA, WHIP and FIP; for batters: power, speed, defense, patience and batting average. This is not a pure radar chart, which normally uses points to draw a shape in the center of the circle, because the order that the categories are laid out in can cause a drastically different shape, and we wanted all metrics to be treated with equal visual weight.

The bottom of the cards feature two “similar players” — these were calculated by Paine using a similarity score algorithm: he computed percentile scores for each player's strengths and weaknesses relative to their peers, then found the players with the most similar mix of talents. The idea is to help readers connect less-familiar names with those of today’s most well-known names.

This also powers the interactive tool at the bottom, where a user can choose a hall of famer and see the most similar Negro League players.

The look of the piece came from collaboration between visual journalist Anna Wiederkehr, illustrator John Battalgazi and art director Emily Scherer. Scherer found Battalgazi after seeing one of his artworks done fro the Negro Leagues Museum art show. His color choices are pulled from historical references and Wiederkehr incorporated them into her graphical designs.

Scherer retouched every one of the 880 images of Negro League players to ensure images were clear and readable. (You can see a before-and-after comparison at https://twitter.com/_schem/status/1365044705529106437.) Photos of present-day players were toned back to prevent a clash between modern images and historical ones.