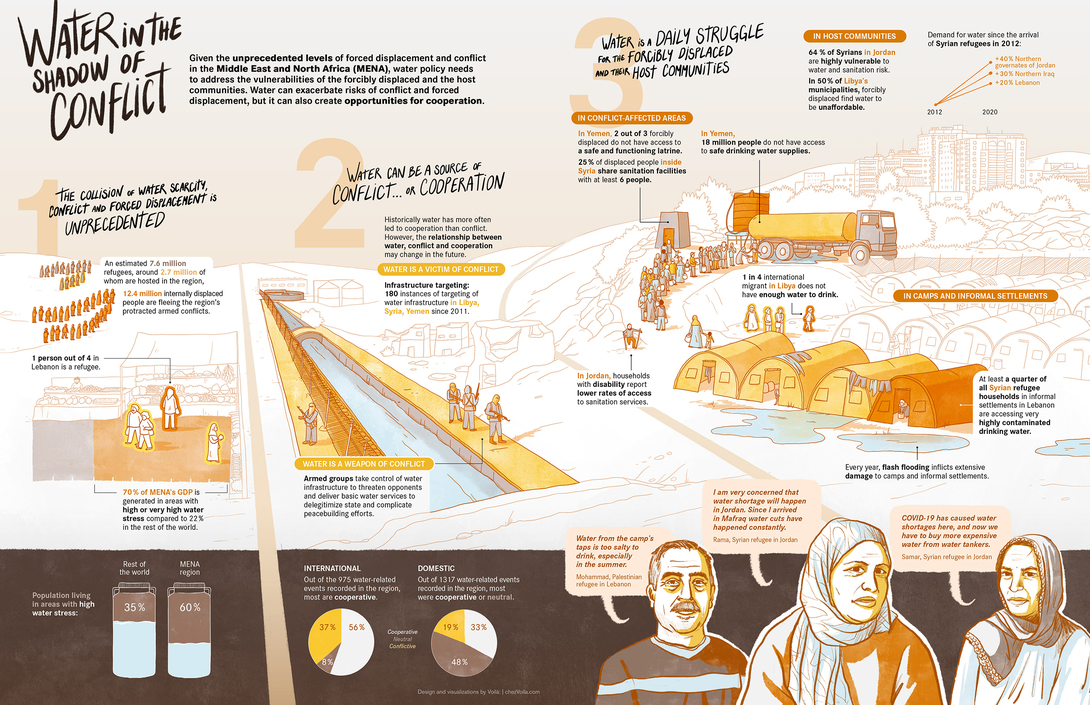 The misunderstood role of water in conflict by Voilà:

Clean water is often thought of as the driver of conflict. In certain situations, water is the victim; in others, it is a tool for cooperation. Yet its largest impact remains in the role it plays in the migration of populations. The World Bank’s report “Ebb and Flow, Volume 2 : Water in the Shadow of Conflict in the Middle East and North Africa” aims to clarify the role of access to safe drinking water in a context of conflict. The project consisted of visualizing these findings to support the World Bank’s call to action. It was a matter of drawing up a portrait of the urgent issues linked to the living conditions of migrant populations and their host countries over a very large geographical area.

When the client came prepared with data and messages, it looked indeed like a few charts could fit the bill. But upon a closer look, this data was about human tragedy and it wasn’t clear that a few computer-generated charts could effectively convey the reality of these findings. Data is much more than numbers, and we didn’t want to hide the human experience behind them. So, in order to bear witness to a reality experienced by populations on the move, we chose to produce line and hand illustrations that recall the atmosphere of travel diaries. With the collaboration of the client, we did some visual research on the reality of refugees in the Middle East to make sure that our illustrations would be accurate and respectful of the people. The warm and restrained palette also allowed us to focus on what matters: the facts are illustrated in colour, while the discreet decor provides context.

The content given by the client was divided into three main themes: 1) Forced displacement exacerbates the pre-existing water scarcity issues to unprecedented levels (2) water can be a source of conflict or cooperation, (3) findings on daily life precarious populations in the face of water scarcity. To present this dense amount of information, we chose to create a single immersive landscape also divided into three parts, as a global overview of the situation. To merge drawing and data, we have illustrated some figures by integrating them naturally into the landscape: they are counted in number of tents, in number of people waiting for drinkable water. Other figures remain charted, such as the two barrels at the bottom left. In some cases, we also used classic charts to prevent them from becoming too gimmicky.