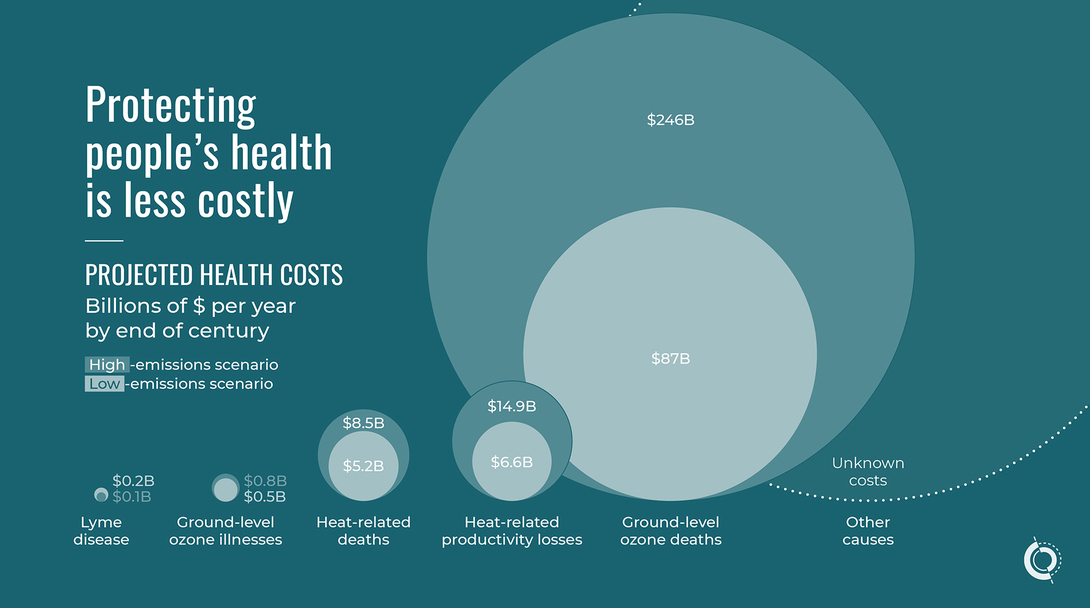 The health costs of climate change by Voilà:

Climate change threatens the health of Canadians, and if we don't act quickly and address the root causes that put some people at increased risk, it could get worse over time. In 2021, the Canadian Climate Institute launched a series of reports on the costs of climate change and the health of Canadians is the subject of its second publication. We worked together to present their findings in a scrollytelling format.

The major challenge of this project was to visualize the abstract: how to show that the health of Canadians depends on different vulnerabilities factors, inequitable social determinants, and that this whole is undermined by climate change?
Our initial research consisted in thinking of the health of each individual as a kind of neutral base, gradually weighed down by climate change, represented by an accumulation of layers. Visually, this stratification worked, but it was difficult for us to make it interact with all the social factors and determinants that pre-exist in each individual.
In the end, we found the solution by reversing the narrative: instead of adding layers, we had to remove them.

Based on the principle that each person lives with a shield made of layers of protection, that this shield is more or less solid depending on the vulnerability factors and social determinants of each person, it was then possible to show how heat waves, diseases, air pollution, for example, attack the shields at different scales. Thus, a person with a basic fragile shield will be much more vulnerable than a person with a strong shield.

The second abstraction to be represented in this project was yet quantitative; it was to visualize the increase in health costs according to two scenarios of moderate or high emissions by the middle of the century in the first instance, and by the end of the century in the second instance. But how to visualize economic amounts of gargantuan proportions? For that, we have chosen to represent them in circular surfaces, allowing us to accentuate the heavy and impacting dimension of these costs by playing with the off-frame—One of the scenarios is so high that it goes out of the frame.

This work can also be read in its static infographic form, which gathers all the content presented in the scrollytelling.