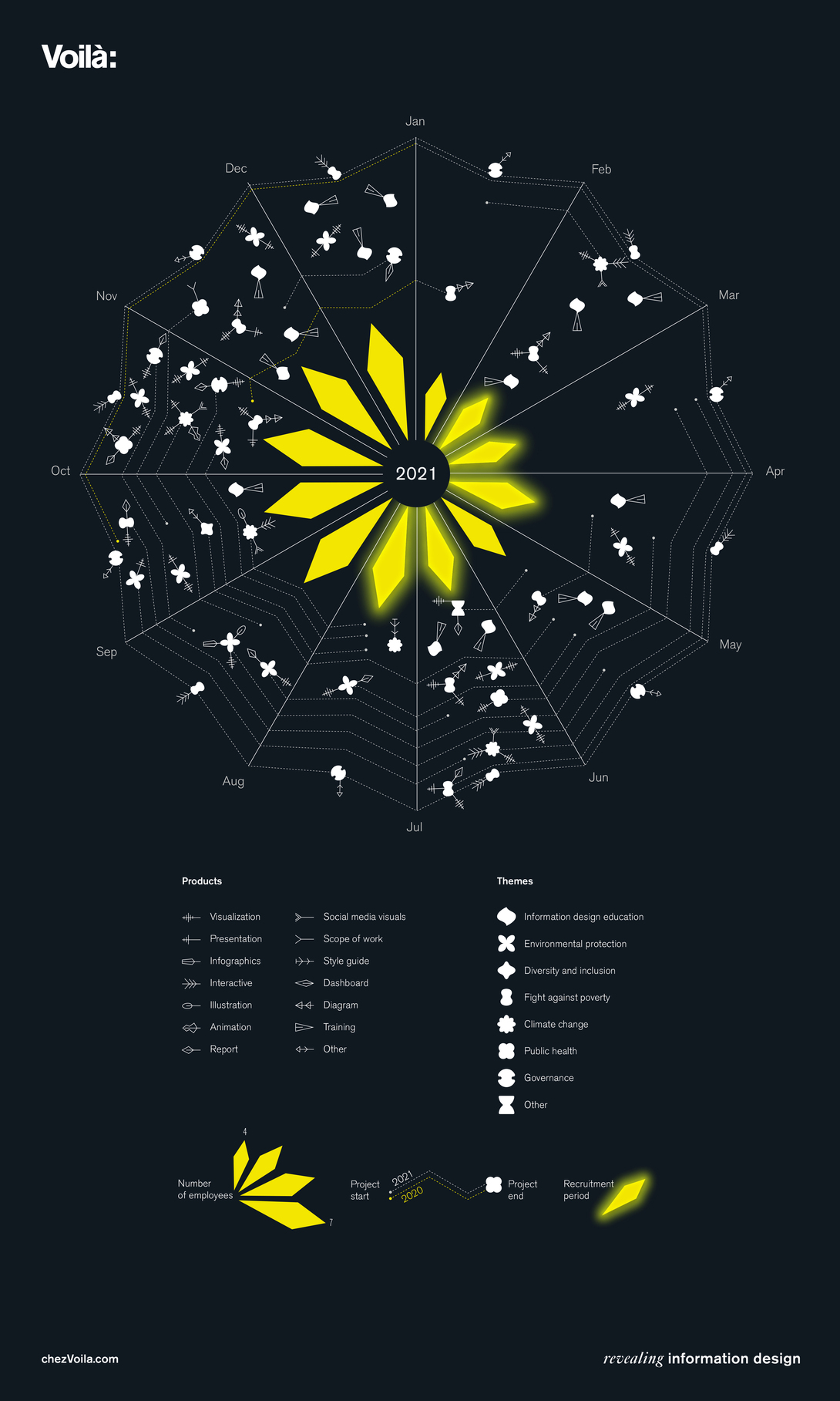 The star of our work by Voilà:

2021 was the year when we created our first ever greeting card, taking the form of a retrospective of our work. This project was made possible by one of the most visible aspects of the company's growth: the increasing number of team members. Over the course of the year, we added 4 new recruits, and finished the cycle with 7 passionate data visualization and design professionals.

Despite the fact that we live and breathe data visualization, this was the first time we created a visualization about our own work. It was an exciting and instructive exercise that allowed us to step back and reflect on the year that had just passed. We wanted to emphasize the importance of the sustainable development issues on which we worked and our ambition to have a positive impact on the world. To do this, we chose to create an attractive and playful visualization rather than an analytical one.

After a few concepts, the spiderweb quickly became an obvious choice. We saw a strong symbol in it: we are weaving our story over the months and our projects are the elements that link it all into a rich and varied web. After a few attempts with colours, we also decided to limit ourselves to the four colours of our branding (yellow, black, and two shades of gray) in order to explore our visual identity. Four colors is not a lot to visualize so many different themes and products, but it allowed us to push our creativity further.

The evolution of the number of employees was to be the focus of the visualization. We represented them in the form of proportional yellow diamonds. To highlight the importance and place of the recruitment periods in 2021, our visual explorations led to the choice of the halo around the diamonds.

Regarding the visualization of the projects we had worked on during the year, the data selection process was sometimes complex. We decided from the outset to focus on the themes and the products through a set of shapes and symbols. Then, we explored ways to represent the number of visualizations produced each month. This is what our first iteration depicts (Left image nom image). A second attempt was made to show the cumulative aspect of the visualizations over the year (illustrated as a spiral in the image on the right) before abandoning the idea of visualizing the accumulation, as it was not relevant enough. As for the cohesion between the projects, we first tried to connect them according to the same client (picture 3) before branching off to a more interesting data point: their duration. These lines represent with precision the duration and to an extent the workload of each project.

Today, looking at this project in hindsight, we say that it is very representative of agency life after all! Thus, we notice that the periods of recruitment - where the work is more scattered - are often at the origin of periods of intense work!