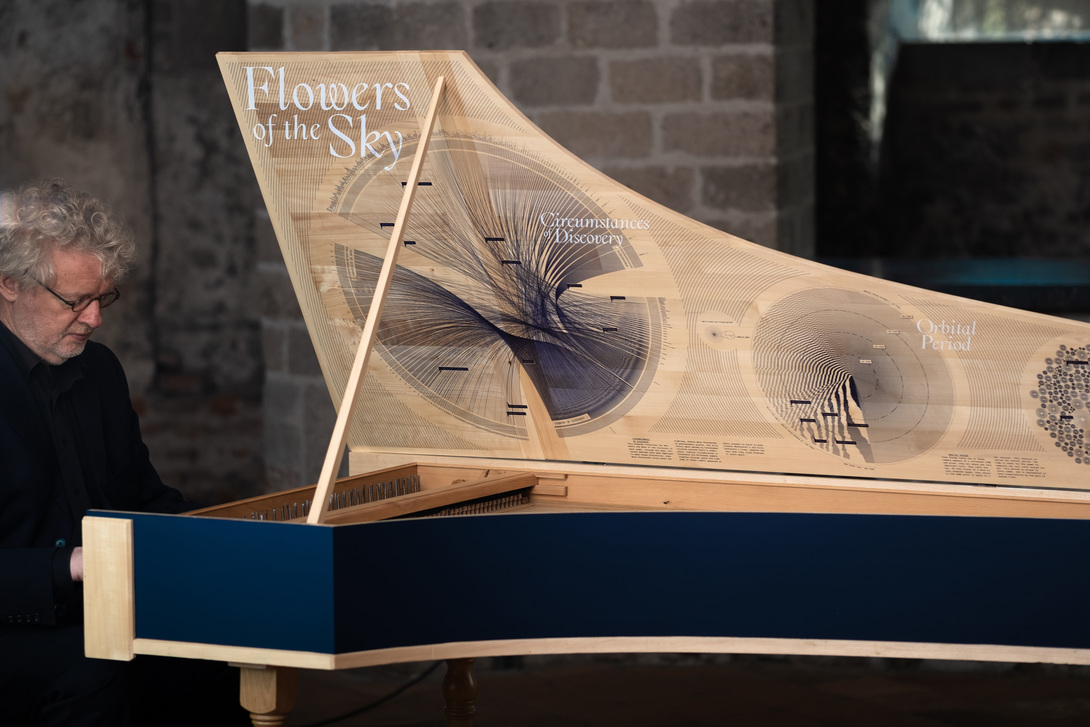 Flowers Of The Sky by Superposition

Dutch conductor and musician Krijn Koetsveld is artistic lead of classical vocal ensemble Le Nuove Musiche. Together they constantly seek out confrontations between past and present. Their most recent accomplishments has been to record all nine books of their favorite musician Claudio Monteverdi's (1567-1643) madrigals - the first ensemble in the world to do so.

Having commissioned the building of a new harpsichord, Koetsveld sought out Superposition to design the visual ornament applied on the harpsichord. We mirrored Le Nuove Musiche's ambition to produce encounters between past and present by setting out to draw parallels between Monteverdi's and Koetsveld's lives. Though Koetsveld was born four centuries after Monteverdi, the two lives are connected by cycles of nature.

Monteverdi lived during the late Renaissance. In our search for connecting cycles we discovered that during this period the commonly held belief was that comets were signs of the gods. It was not until the start of the seventeenth century that scientists started to prove comets were not in fact signs of coming disaster. Where comets used to be referred to as Flowers of the Sky, it slowly became clear these flowers were actually relatively small solar system bodies.

Today, this once feared phenomenon is studied by space agencies such as NASA using high tech sensors and optics, resulting in immense amounts of highly accurate data describing these comets. Using this data, we designed and programmed a bouquet of four unique data visualizations that draw parallels between both lifespans. Each visualization uncovers information about comets that both Claudio Monteverdi and Krijn Koetsveld might have seen from Earth during their respective lives. Together, the visualizations form an alternative timeline that connects the two musicians.

Periodic Sightings (outside)
This arc diagram consists of a timeline that show Monteverdi's life on the far left and Koetsveld's life on the far right. On the outside of the harpsichord it shows those comets that both musicians may have seen during their time on Earth, how often they have appeared in the mean time, and how long it will take for them to return.

Circumstances of Discovery (inside)
This chord diagram visualizes who first discovered each comet, from which location on the planet they did so, and in which year the discovery was made.

Orbital Period (inside)
Comets travel along the same elliptical path constantly, and because they do so at a constant velocity they return to the same place in the solar system periodically. This interval is called a comet's periodicity, and it is unique to each comet. This visualization uses dashed lines to chart each comet's periodicity and sorts the comets on their Orbital Period.

Apparent Magnitude (inside)
When we gaze up at the night sky, every object in it seems to glow. The combination of the brightness of an object and its distance to the viewer is called the apparent magnitude. This diagram shows the relative apparent magnitude of various comets.