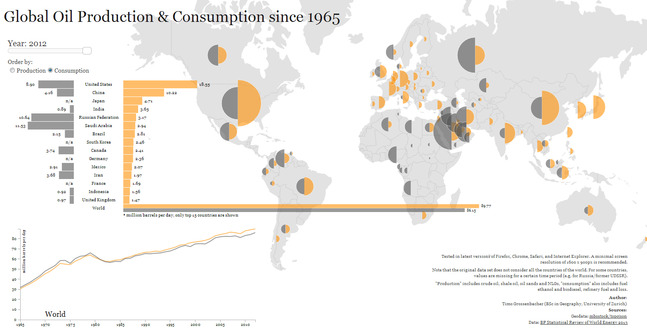 Instead of writing yet another paper, I handed in this visualization for the LERU Bright 2013 Student Conference which will be held in August in Freiburg, Germany. This year's conference topic is "Energy Transition in the 21st Century" and I am part of the "Dependencies" working group.

This "Atlas der Globalisierung"-inspired visualization, based on very recent data by BP and built with D3.js, allows the reader to quickly grasp the temporal and spatial differences in oil consumption and production. On one hand, during certain periods of history, some nations consumed almost as much oil as the rest of the world together. On the other hand, the data of the last ten years show a growing divergence between consumption and production. After all, I hope this work makes clear that nations are heavily interdependent when it comes to oil - the main driver of our global economy.

Tested in latest versions of Firefox, Chrome, Safari, and Internet Explorer. A minimal screen resolution of 1600 x 900px is recommended.