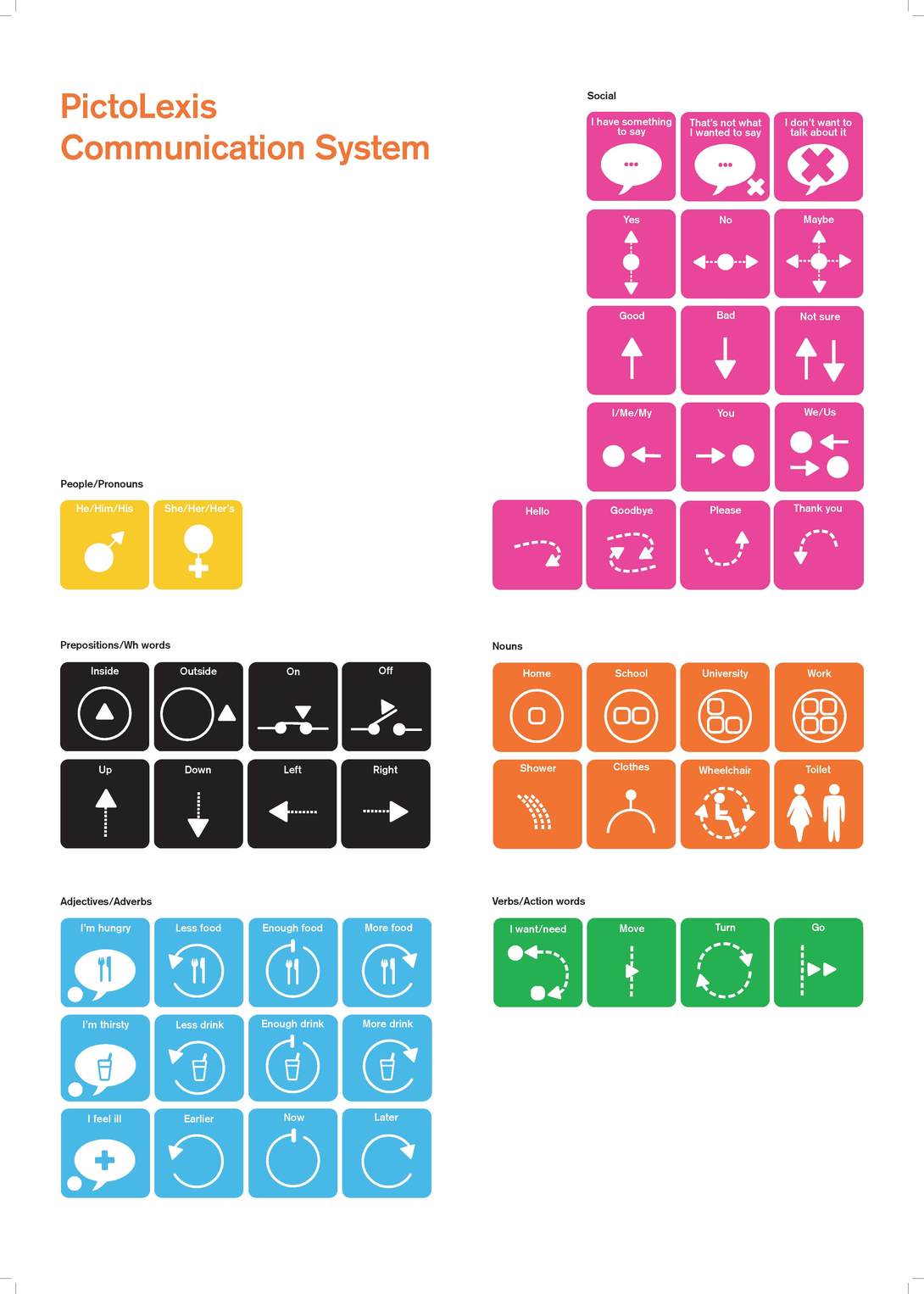 I created this system as a piece of functional information design for people that have difficulty with verbal communication, often as a result of disabilities such as autism or those that impact upon motor skills. After much research, I found that many of the existing augmentative and alternative communication (AAC) symbol systems are so basic that they do not reflect the user's intellect or indeed give them a chance to recognise more complex symbols. At first I was keen to create an exact representation of the existing symbols' meanings but I felt this approach would not benefit AAC users that are of high intellect and merely use symbols to save them spelling every letter of each individual word. This system was composed to make communication for these people more effective and to maximise the speed of communication, as existing communication methods can be quite time consuming for both the user and the person who is trying to understand the user's communication.

Having been keen initially to make these symbols exact representations, I discovered after studying orienteering maps, that the symbols depicted were not exact representations of the objects or geographical positions associated with the activity. However, because this was a form of communication that had a key and could be learned, the abstract concept worked. This was something I was then keen to develop within my work, with a view to these symbols being taught and heavily reinforced. Therefore, to create some consistency as a result of changing the face of the existing symbols, I decided to maintain a colour code similar to that of the existing Fitzgerald Communication System. This was to give existing users a familiar way of identifying these PictoLex symbols, despite their appearance being of great contrast to the current AAC pictograms. I also retained a simple colour palette, so that the symbols could be easily reproduced and inverted for those that have difficulty perceiving colour. Moreover, maintaining this palette allows successful photocopying, as the symbols are still clear and legible without the colour code. In addition, the simple colour composition is also helpful to those who do not have access to extensive editing software or wish to use other colour codes.

Overall, taking the aforementioned elements into account, I feel I have successfully devised a system that has the capacity to improve forms of self-expression for those that are unable to communicate verbally. However, if I had more time, I would endeavor to make the concept of the system more extensive by increasing the number and subject of symbols, to provide the user with more options for communicating, as well as opening up the world in which they are able to inform society about themselves and their communication.