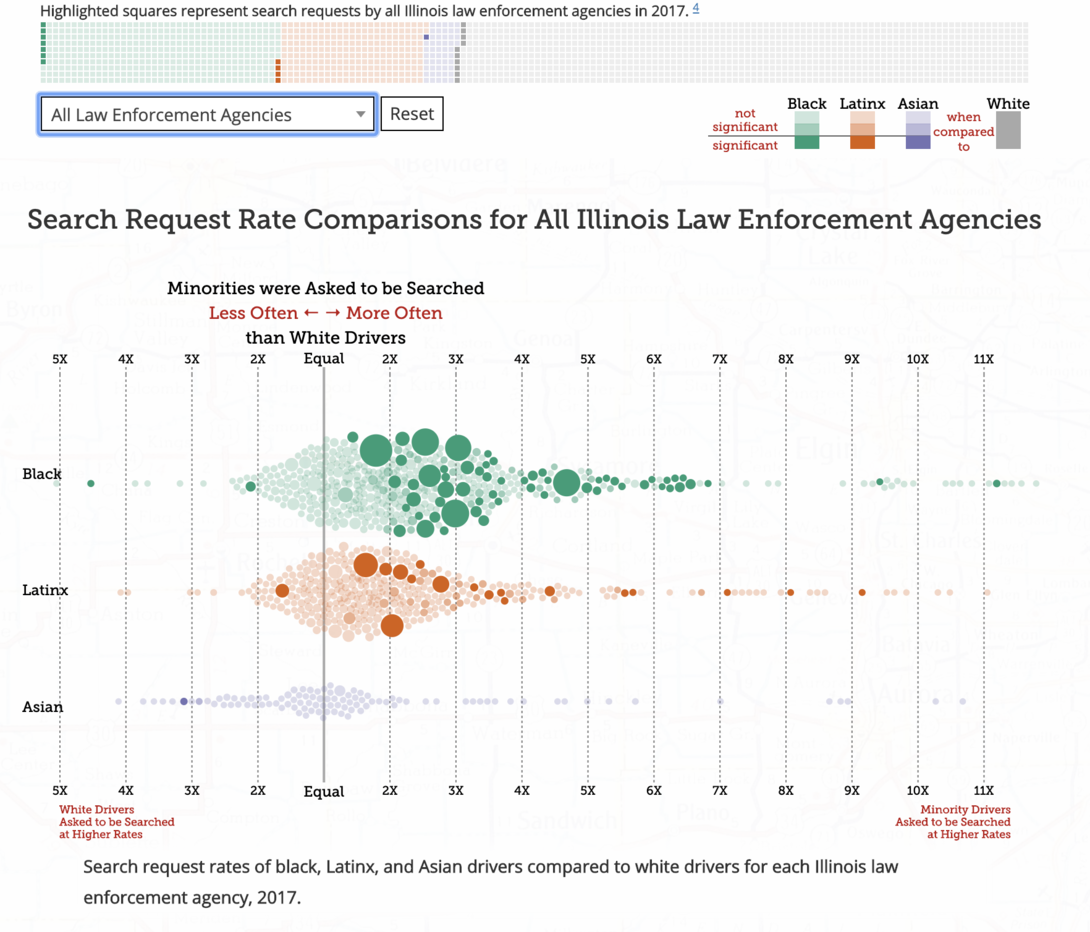 In 2017, over two million traffic stops occurred in Illinois. Each time an Illinois resident was pulled over, the enforcement officer was required to record the details of the traffic stop, including:
- The driver's race
- The reason the driver was stopped
- Whether or not the officer conducted a search
- Whether or not contraband (illegal drugs, weapons, etc.) was found during the search
- What action resulted (e.g. a citation/ticket, warning)

The Illinois Traffic Stops data described above was analyzed in order to investigate whether systemic racial bias appears—and to what extent—in the Illinois traffic stops data. This site showcases the results of the analysis in a visual and explorable way, serving three main objectives.

First, showcasing the results in a way that allows the ability to focus on specific law enforcement agencies gives those agencies the ability to easily explore their own data. Without this ability, law enforcement officers can’t know for certain what biases exist within their districts. In fact, research has shown that many of the biases found in this type of data are likely unconscious or unintentional, meaning agencies may not even realize they have a problem to address. By presenting this analysis in an easily digestible and explorable way, the law enforcement agencies of Illinois are able to educate themselves on what biases exist within their department, and use the insights to work together and make improvements for the good of the people they serve.

Second, this project helped to enact change in Illinois Policy. The Illinois Traffic and Pedestrian Stop Statistical Study Act, which requires law enforcement officers to collect data during a traffic stop, was set to expire earlier this year. Without access to this data, law enforcement agencies would once again be in the dark on this matter. Thankfully, after the release of this site and a related report by the ACLU, a new bill continuing the collection was signed into law.

Lastly, this site serves as an interactive resource for the public to learn about traffic stop law enforcement practices in the state of Illinois.

Some key takeaways from this project are that, across Illinois:
- When law enforcement officers search a car, they are typically no more likely to find contraband on a minority driver than a white driver.
- Yet, Latinx and black drivers are searched at higher rates than white drivers.
- Black drivers are also more likely to be subjected to dog sniff tests than white drivers.
- In the agencies with statistically significant differences between white and Latinx dog sniff rates, dog sniffs are used in stops involving Latinx drivers at higher rates.