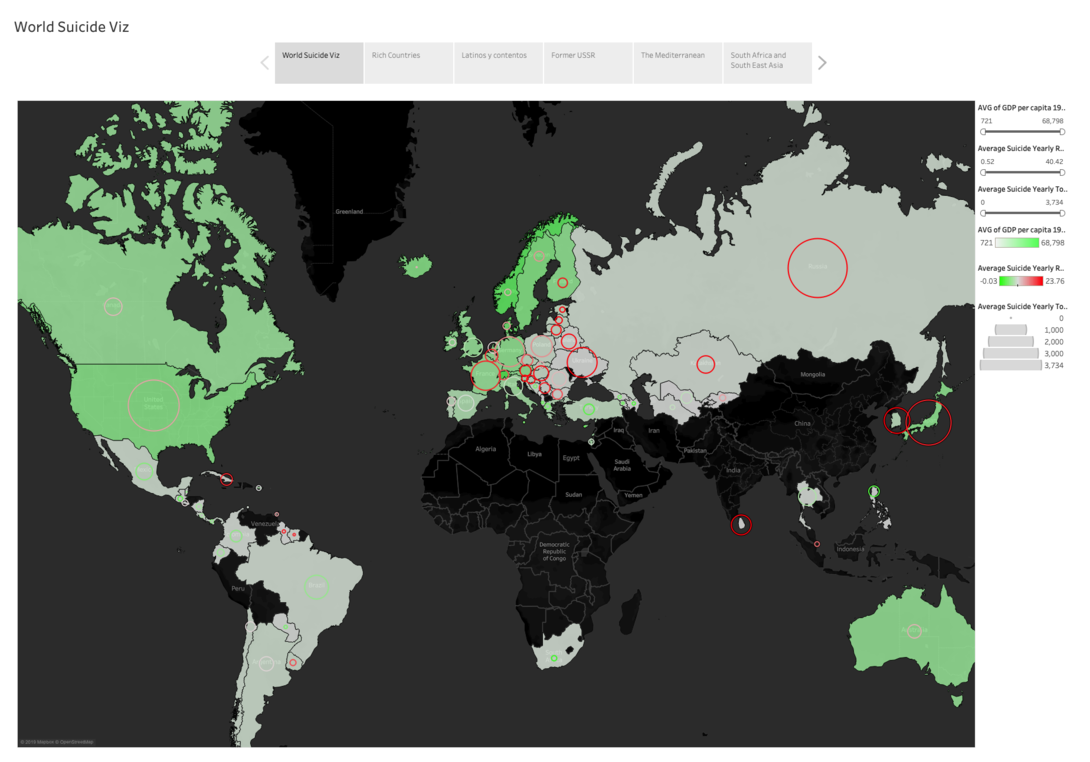 A Map Of Economics And Suicide by University of Edinburgh

There is a big problem in economics regarding tragedy, as in this field someone's pain is normally reduced to a figure for commensuration, here I would like to address that.

Most people find it difficult to discuss suicide. Sadly, this often happens only after suicide has happened to someone close, and self-immolation is not normally the route casual conversations go. It is definitely a serious matter, a phenomena that happens in every country, even in those where it is denied or openly frowned upon.

Recent stats on suicide have provided of views on what may cause suicide, it is common to think that cold weather or lack of resources can lead someone to take their own life. This kind of generalization is dangerous as examples that counter them can easily be spotted once the data is properly analyzed.

In this map I explore the relationship that several countries have had in te last decades between their reported stats of suicide, as per the World Health Organization, and their growth domestic product. Suicide is a taboo subject for governments and institutions, it is seldom considered a health issue and more often exclusively attached to cultural, religious, environmental and even economical causes.

This interactive map aims to bridge the gap between the particularity of individual pain and the often cold-blooded world of national statistics. The map shows us the compared status quo of each country in regards of self-inflicted death and per capita growth domestic product. In shades of green, the level of saturation for each country describes their economical growth in the last 30 years. In shades from green to red we find circles for each country, these circles hold 3 pieces of information:

1. The color from green to red signal their Suicide Rate (number of suicides per 100,000 population), green is below world average and red over, and saturation is higher on the extremes.

2. The size of the circle relates to the average total deaths by suicide in the last 30 years.

3. Not an obvious one that needs inference. The overlay of these circles over the map shows us a relation between country size and suicide totals, sometimes small countries have high suicide rates, but geographically small populations mean they only have a few suicides per year, like Singapore. In countries with large extensions of land, suicide rate might not be as high, but yearly totals can reveal there's a widespread societal problem to tackle, this is the case of Russia.

The users explore the data themselves through moving the sliders, and by visualizing them simultaneously the stats used here (WHO, World Bank), each user can find that the common factors we normally blame suicide on can play a part, but each country has many factors at play that make them complex in their own way.

What I've found is that there's no best combination of factors, yet, we can find remarkable regional examples like the Mediterranean and Latin America, where low suicide figures are the norm.