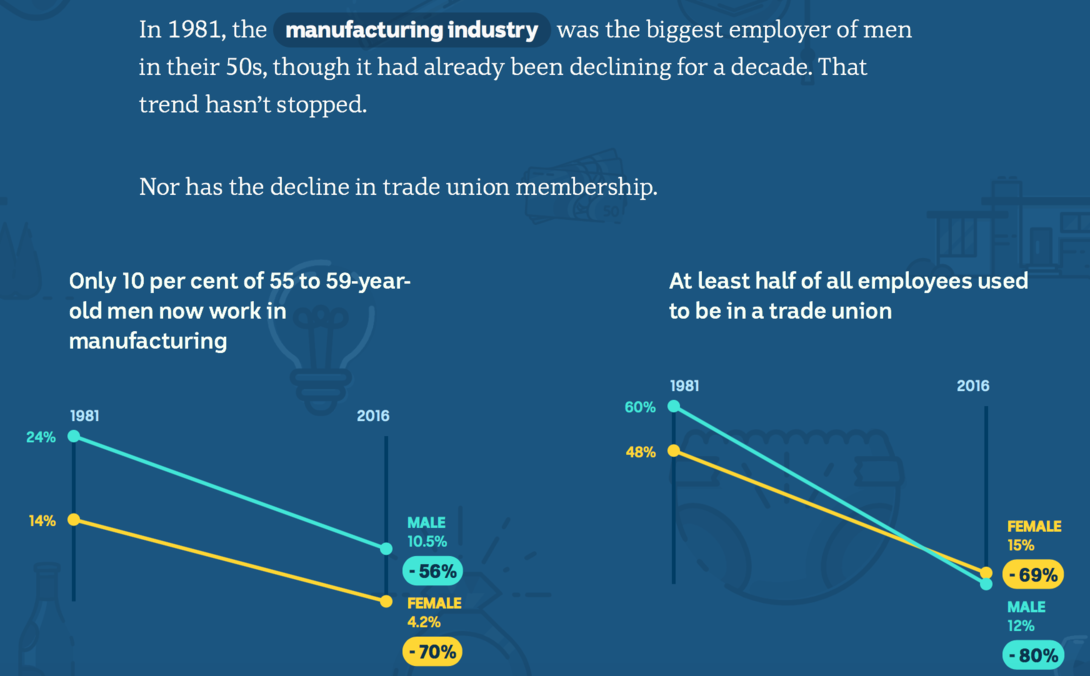 In Australia, the debate about the generational divide is as heated as it ever was, stoked by stereotypical media-baiting — from the Baby Boomers who wrecked the world and stole all the wealth, to Millennials with their sense of entitlement and lack of work ethic. The truth about whether life is better or worse now than it was 30 years ago lies somewhere in the middle.

With that emotional environment in mind, the ABC News Story Lab wanted to find a way of introducing hard data into the debate to actually show ‘How Life Has Changed' for people of various ages since the 1980s. We combed publicly available data for the outcomes that make a difference to people’s lives - home ownership rates, life expectancy, death rates from common diseases, education levels and employment rates, to name a few.

The aim was to show readers how life in the 1980s was different for people of their own age. We therefore structured the interactive story by 10-year age categories, grouping outcomes most relevant to that age group. Readers could either click on an age category they were interested in, or scroll through the whole story to each about each group.

The data was presented in slope charts with start and end points of (approximately) 1981 and 2016, showing male and female data where relevant. Slope charts are a simple, uncluttered way to show the change between two time points where the activity in between is not important. The slope of the chart reflected the percent change from the 1980s and the lines were scaled to reflect the most striking differences - a steeper line indicated a more dramatic change.

The data was supplemented with commentary from newspaper articles of the time to show how attitudes had changed. For example, the headline for a chart on how childhood obesity has increased by 145% was ‘Australia was still becoming accustomed to working mothers in 1981. “Children grow fat while mothers work,” one headline screamed.’

This piece made the shortlist for Data Visualisation of the Year at the Data Journalism Awards 2019. It also won two bronze medals at the most recent Society for News Design Awards - Use of Data, and Editors' Choice.