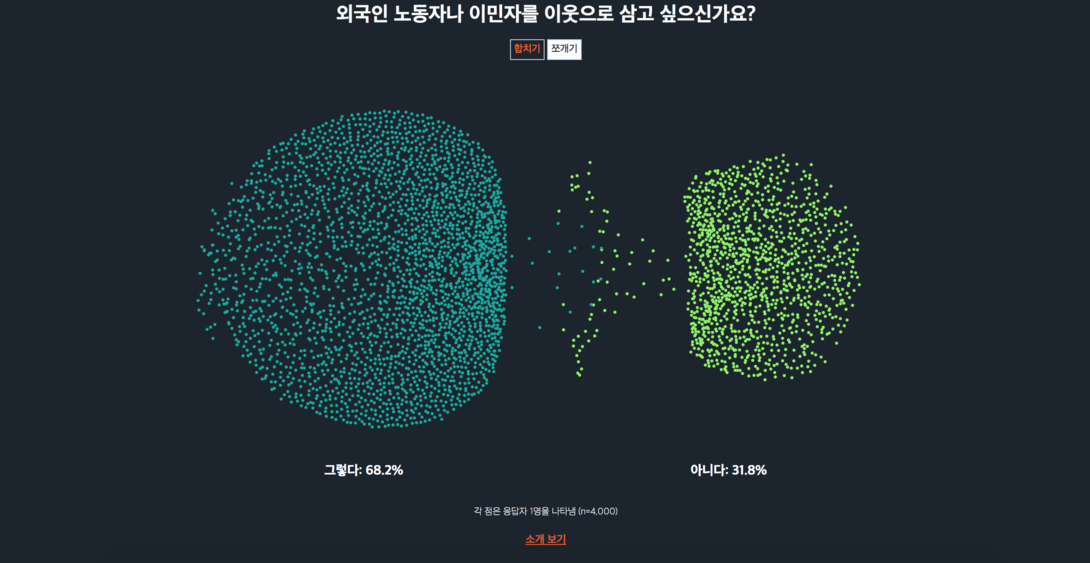 Being an expat in the UK, 'how a society treats outsiders and minority groups' has become one of the subjects that I care about the most. South Korea, my home country, in my memory wasn't the society that welcomes outsiders. I started wondering about where Korea stands today. Has it become more diversity-embracing than how I remember? I hope this small piece of visualisation that will build up to a larger piece gives a clue.

A translation of the Korean text presented with the visualisation:

According to 2017 census, immigrants make up 2.9% of South Korean population, which suggests the nation is multicultural by the UN's definition. Along with low birth rate and aging, a rise in the number of immigrants is driving structural societal changes in Korea. Nonetheless, with a long history (or a myth) of being monoethnic, many Koreans still think that monoethnicity is a key part of national identity.

So today do Koreans see foreigners living in Korea for study, work or family as members of their society?

(2015) includes the survey results of 4,000 adults to holistically capture Koreans' view on the topic of multicultural society and immigration. Among a range of questions, the chart presents the response to one question that summarises where Korea stands: 'Would you like to have immigrants as neighbours?' Yes or No.