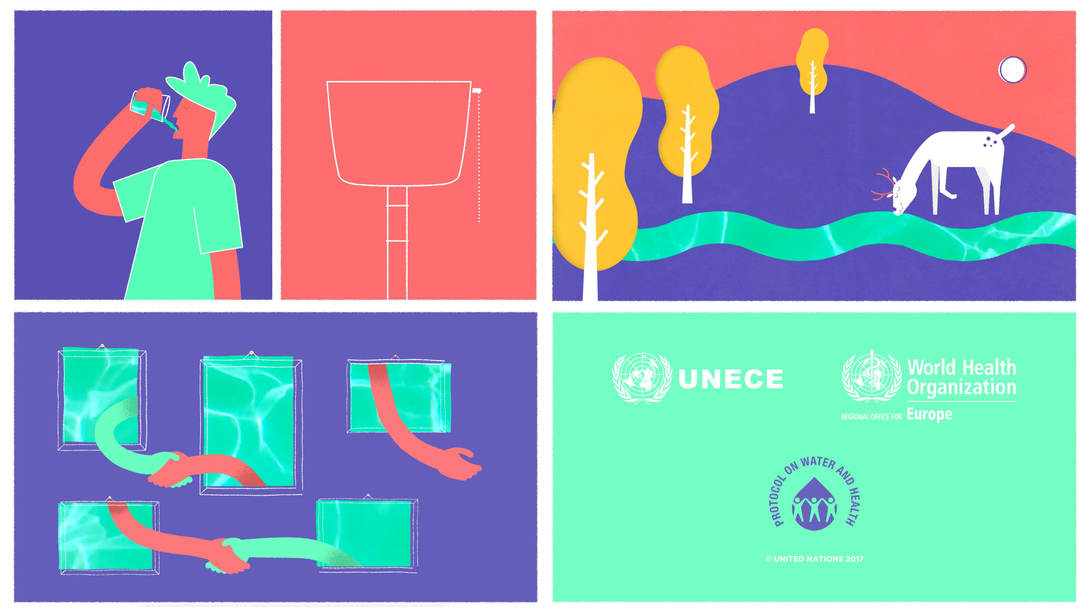 Video Motion Graphics for Protocol on Water and Health by Blossom

Nowadays, most Europeans take clean drinking water for granted. Yet, in the pan-European region alone, about 19 million people still do not have access to improved water sources and 67 million people lack access to improved sanitation facilities. About 100 million people do not have access to sanitation facilities at home, which makes them vulnerable to water-related diseases, such as cholera, bacillary dysentery, coli infections, viral hepatitis A and typhoid. Cleaner water and better sanitation could prevent up to 30 million cases of water-related disease each year in the region. The 1999 Protocol on Water and Health was negotiated with this in mind.
The United Nations Economic Commission for Europe (UNECE) asked Blossom to develop a video able to describe the Protocol on Water and Health, the first and only international agreement on water, sanitation and health. The aim of the protocol is to ensure that all people in the Pan European Region have access to safe drinking water and adequate sanitation through sustainable water management.
To answer to the need of an explanatory video able to catch the attention of the public and being at the same time appealing and clear, Blossom used mixed media animation: motion graphics, footage and CEL animation. While motion graphics was used to present data and key messages, footage of water were used to create movement and to focus the user’s attention to water, the key element of the Protocol. CEL animation served to make situations and actions warmer and more realistic.
The result is a 3-minute video, where Parties can immediately understand the reason behind the Protocol and the importance to establish national and local targets, for the well-being of the populations.