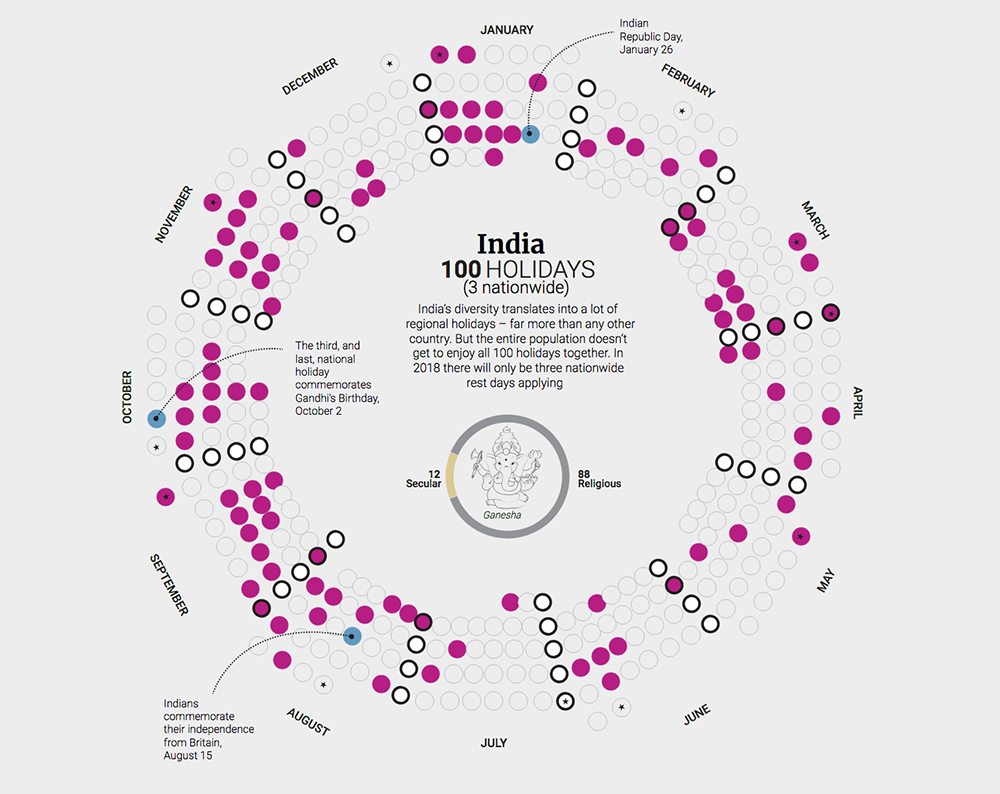 Getting Away From Work in 2018 by South China Morning Post

It is a commonly held belief that Hong Kong is blessed with a relatively large number of public holidays to compensate for employers traditionally limiting their workers’ annual leave. Marco Hernandez decided to put this to the test by posing a question: where in the world do workers get the most public holidays?
By analysing data researched from government sources Hernandez discovered countries with diverse religious practices tend to give more national holidays to accommodate the cultural richness of their populations. Curiously, territories that are geographically smaller also seem to have a tendency to give more national holidays.
The data shows how India’s diversity translates into a lot of regional holidays – far more than any other country. But the entire population doesn’t get to enjoy all 100 holidays together. In 2018 there will only be three nationwide rest days.
Meanwhile, half the holidays celebrated in Hong Kong are secular while the rest are of a religious nature. There are 17 public holidays in 2018 which compares well with the UK’s nine nationwide, but pales when you consider statutory minimum holiday entitlement for full-time workers is 28 days in the UK compared to Hong Kong’s entry point of seven days.
An interactive element uses the data from 20 countries for readers to compare. The countries cover a broad spectrum of governments that provide the most and least holidays and indicates how many are nationwide, regional or limited to particular sectors such as government employees.
Just for fun, Hernandez closes the data visualisation by showing if we took every public holiday from all 20 of the places featured and applied them to a single calendar, the only full Monday-Saturday working week would be the second week of March. Most of the year we would only need to work 2-3 days a week.