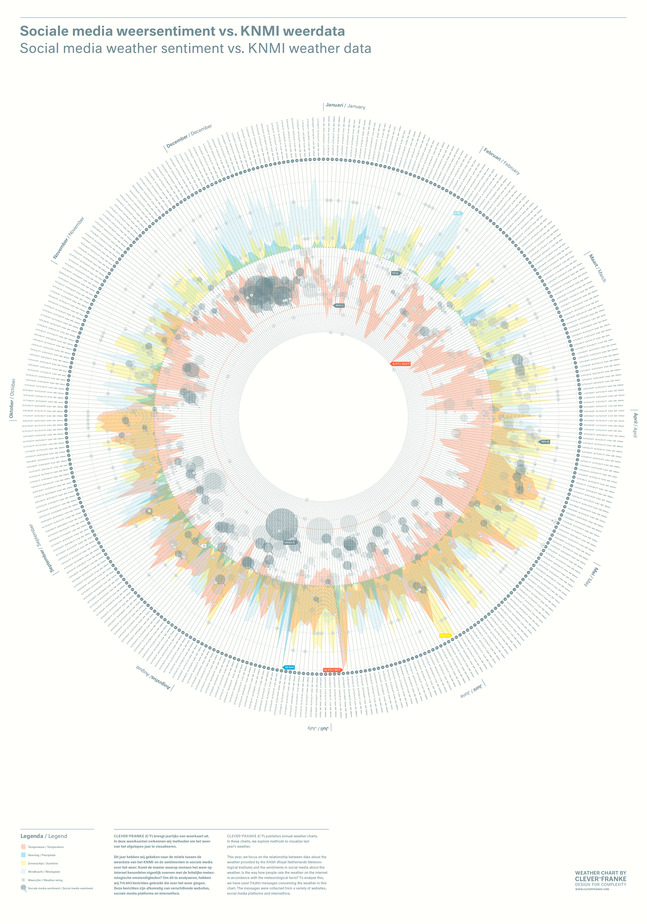 Each year, CLEVERÂ°FRANKE (CÂ°F) publishes a weather chart. In these annual charts, we explore methods to visualize last year's weather. CLEVERÂ°FRANKE has a special affinity with the weather; the names CLEVER and FRANKE have been combined with the aid of the degree symbol. A reference to the astronomer Anders Celsius (CÂ°) and physicist Daniel Fahrenheit (FÂ°).

This degree symbol served as the basis for the design of our visual identity: two researchers within the same field, found different approaches and references. Something definitely recognisable in the personalities of the founders of CLEVERÂ°FRANKE.

For 2012 we focused on the relationship between weather data provided by the KNMI (Royal Netherlands Meteorological Institute) and the sentiments in social media about the weather. Is the way people rate the weather on the internet in accordance with the meteorological facts? To analyse this, we have used 714,843 messages concerning the weather in this chart. The messages were collected from a variety of websites, social media platforms and internetfora. This data was provided by Finchline, a company specialized in social media monitoring.