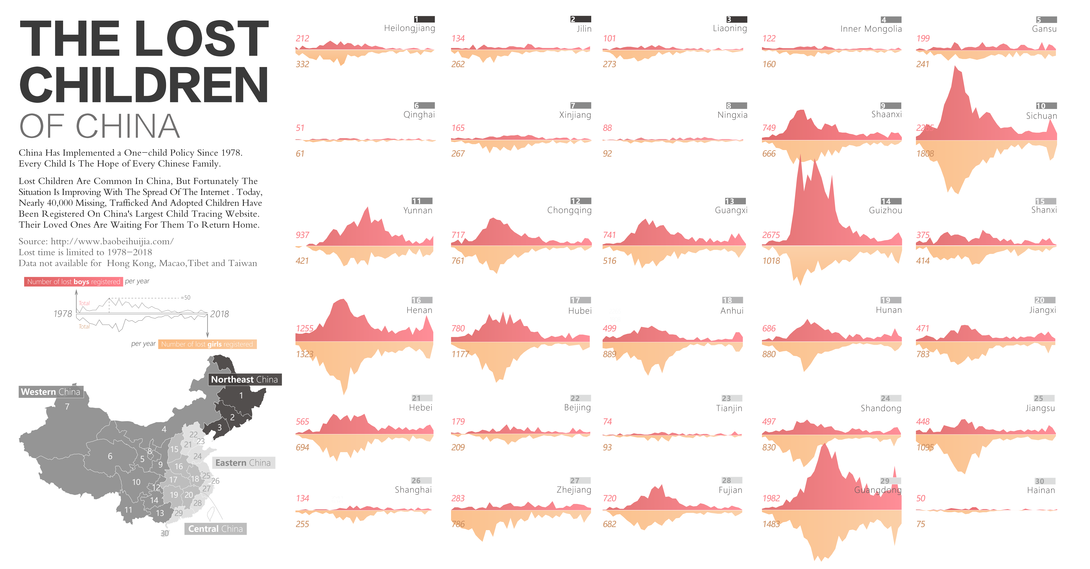 The Lost Children of China by east china normal university

China has implemented a one-child policy since 1978. Every child is the support and hope of every Chinese family.

Lost children are common in china, and fortunately the situation is improving with the spread of the internet in China. Nearly 40,000 missing, trafficked and adopted children have been registered on china's largest child tracing website. Their loved ones are waiting for them to return home.

Data show that the 1980s to the 1990s is the highest number of lost children in China. Despite the rapid economic development, some chinese families are still facing financial pressure, so they have no choice but to leave their second and third children for foster care or abandon them. At the same time, the phenomenon of abduction and trafficking also began to run rampant.

As far as the regional distribution is concerned, the problem of lost children is most serious in Western China, such as Sichuan, Guizhou, and so on, whilst the situation in the eastern part of china is relatively good. The number of missing girls in central China, such as Jiangxi and Anhui, is almost twice as high as that of boys, which may be related to the local culture of "Son preference". Overall, however, the number of lost girls and boys is about the same.

I hope to arouse the public's attention to this database, so that more parents can get their children back in their later years. This is the original intention of my creation of this work.