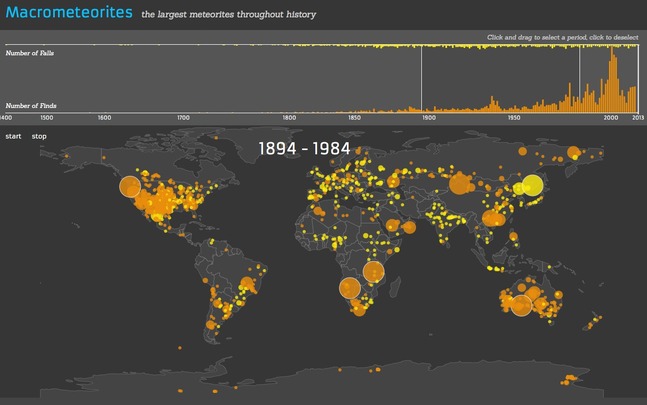 Meteorites are meteoroids originating in outer space which survive impact with the Earth. From a total of more than 45700 recorded meteorite landings only around 3800 have a mass larger than 1 kg. This interactive visualization is about this group of meteorites and it's based on a dataset from "The Meteorolitical Society".

The "geographical exploration" tell us that most meteorites have been found in highly populated areas. It's easy to suspect that there are probably much more meteorites which have not been found yet.

The exploration in time show us, for instance, that there has been a gradual increment in the amount of found meteorites with a highest point around 2000. You could think that there has been a meteor storm during that period, however when isolating these years in the timeline, the map show different groups of meteorites which have been found in areas where organized search has taken place.