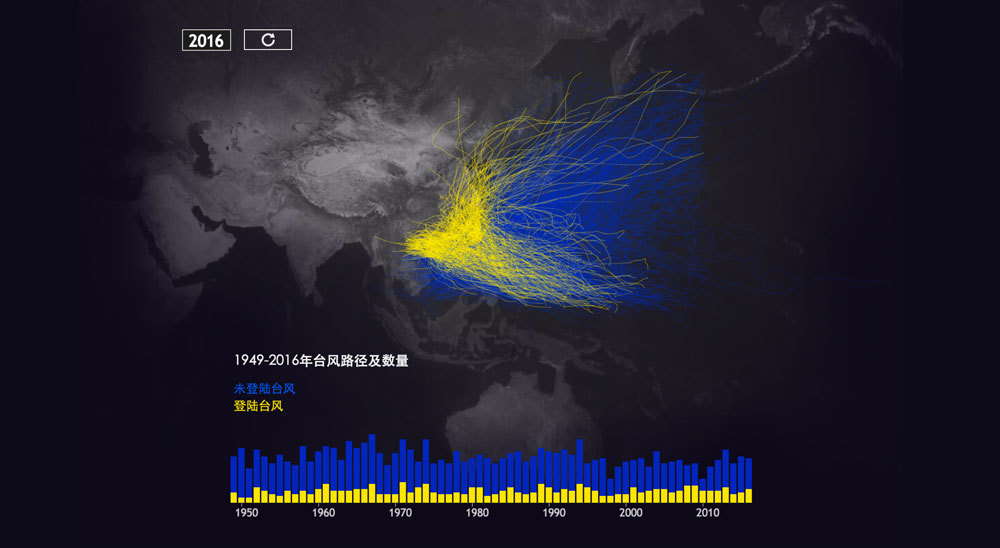 Typhoon Footprints in 68 years by Sixth Tone & The Paper

Every summer, typhoons rage in the southeast coast of China, causing great losses to the coastal people. We visualized the tracks of all the 1832 typhoons since 1949, and unfolded the story around how typhoon has impacted China in different ways.
The top part is an animated track map that visualized all the typhoons from 1949 to 2016. The yellow lines (474 tracks) show the ones that landed in China. The bar chart below the map shows the number of typhoons in every year.
Then we summarized how frequently and badly we suffered from typhoons.
The first part is about the super typhoons whose names have been removed from the namelist. Those typhoons that have their names retired tend to be exceptionally destructive storms. We visualized those typhoons respectively. The different width and color of lines resperent the different level of TCs. And the map clearly shows landing track of those super typhoons.
The Second part is about which area has been hit most. When we calculated the number of typhoons that landed in each provinces, Guangdong and Hainan suffered the most; but when the user click on the button above the chart, they will find out Taiwan had most super typhoons landed in its land.
We also collected the damage data from yearbooks, which was visualized in a bar chart, including the number of victims, the number of deaths, and economic losses, so that we can further observe the impact of typhoons on people.
This visualization was designed for both desktop and mobile.