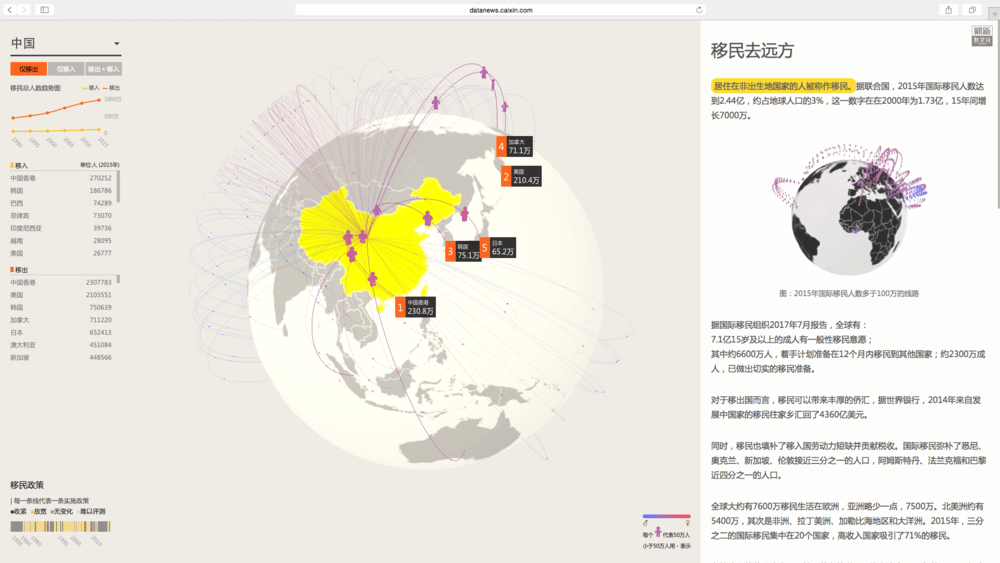 An International migrant is a person who is living in a country other than their country of birth. The number of international migrants worldwide has continued to grow rapidly in recent years due to the development of modern transportation and technology. This phenomenon has deeply impacted and reformed the human economies, policies and society. There is no doubt that the world is on the move.

Our team used the open database from the Department of Economic and Social Affairs at the United Nations and visualized it with a 3D-globe model. By rotating the 3D-globe model, you can directly discover the population Inflow and outflow of 232 countries or areas all over the world. The connections between different countries create a sense of movement. We added the character graphics to represent the large number of population movement. The changing colour of the line represented gender. Some interesting conclusions can also be found during your exploring. For instance, the largest number of international migrants resided in the United States, Germany and Russian; but for different reasons, respectively. In some countries, there are more immigrants than emigrants; In some countries, the situation is just the reverse. The migrant populations of different countries have different gender ratios.

The specific data, trend line-chart and polices could be seen on the left side. The content also added some interactive buttons; it could help readers to understand the dynamic national data while reading the article.