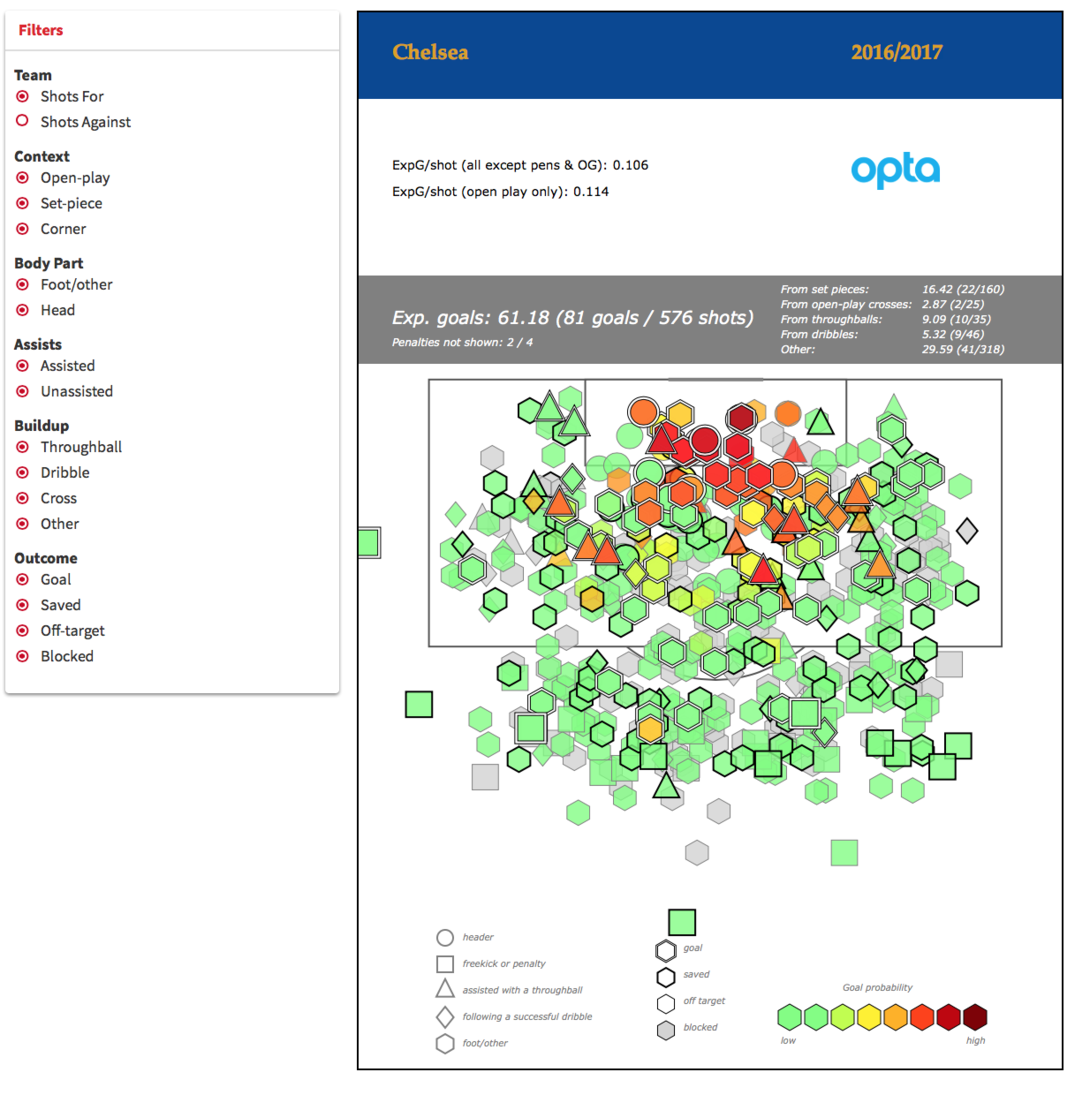 The use of Analytics in the Football industry (European Football, or Soccer) is in its infancy. Unlike the US, where analytics are integral to any sports organisation, in Europe, it's just getting started. Whilst most football clubs will have an Analytics team, the focus tends to be on traditional methods of performance analysis and scouting.

Our company, StatsBomb Services, launched in January this year with the aim of providing football clubs with analytics tools that are simple to use and help integrate what can be an intimidating field of expertise easily into club culture.

Opta are the principal data supplier, we parse 400,000 events every week. Analysing this data and finding ways to create simple data visualisations that add value that the industry will accept and learn from is our primary focus.

One critical concept that we aim to educate our clients about is Shot Quality. Taking higher value shots makes your attack and scoring output more consistent. As a result, it should make you more likely to win. This is one of the easiest concepts to grasp from an analytical perspective and one of the hardest to teach to football people.

It flows from four basic principles:
- The closer a shot is to goal, the more likely it is to be converted.
- Central locations are better than wide. (This mostly has to do with angles of the goal covered by the goalkeeper from wide shots.)
- At the same distance, shots with feet are far more likely to become goals than shots with the head.
- Crosses are hard.

When it comes to shots, you are dealing with hundreds of thousands of past attempts where a player has taken a shot. If they have never been taught where to take them, a player then needs to actively think before they might shoot whether that shot is good or not, and then choose whether to take it.

The combination of a fan culture where long-range goals make the highlight shows and get the plaudits from the pundits, and the sheer weight of habit make this a hard concept to convey, especially to mature professional footballers. This is even more true if no one has explained the concept of good and bad shots to players previously.

And so we have generated our shot map. There are others around, but ours is interactive, users can select types of shots they are interested in, and can easily see which shots convert to goals, from where. These are visualised at a player or team level.

We hope to have simplified this sometimes mystifying concept for our audience, whilst retaining the complexity and integrity of the data.