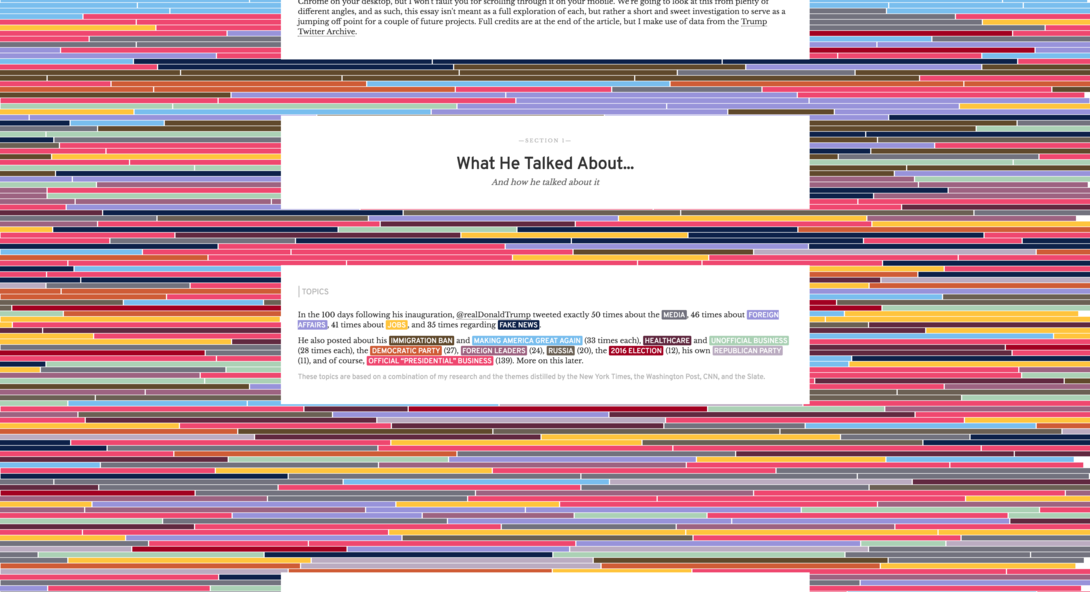 Trumped: Analyzing 100 Days of Tweets by Sam Vickars at Parsons the New School for Design

When Donald Trump took office on January 20th, 2017, he was already known for his tweeting — Slate even called him the best. Known for his strong interjections and his 140-character feuds with everyone from Rosie O’Donnell to Mac Miller, the now-president always makes the most of his quickly typed messages and his 32.7 million followers, a following which, as the New York Times pointed out, is 1.7 times larger than that of the official @POTUS twitter.

In April, both the Washington Post and the New York Times dove into the President’s tweets over his first 100 days, cataloging and categorizing each, tracking his retweets, emojis, and busiest times, and discussing his repeated yells of “FAKE NEWS!” But I wanted to dive a little deeper into the @realDonaldTrump’s tweets, chirps, and occasional misfires over his first 100 days in office.

This essay visualizes all 501 Trump tweets between January 20th and April 29th to find out what he was saying, how he was saying it, and when he was talking about it. We'll also look at the source of his messages and the tw-entiment (ha, get it?). It works best on Chrome on your desktop, but I won't fault you for scrolling through it on your mobile. We're going to look at this from plenty of different angles, and as such, this essay isn't meant as a full exploration of each, but rather a short and sweet investigation to serve as a jumping off point for a couple of future projects. Full credits are at the end of the article, but I make use of data from the Trump Twitter Archive.