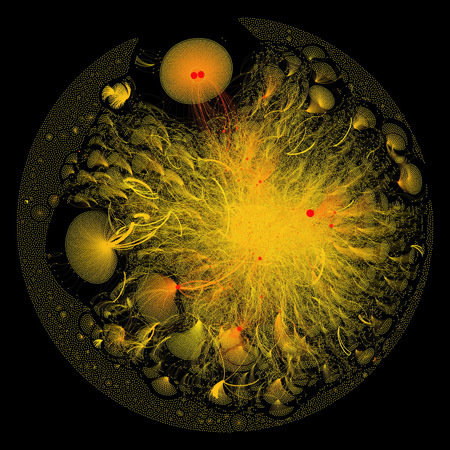 #breastcancer Twitter Connections by Royal College of Surgeons in Ireland

An image which illustrates a fascinating visualisation of Twitter conversations about breast cancer, created by a team at RCSI (Royal College of Surgeons in Ireland), has been unveiled as a winner of the Wellcome Image Awards 2017. The RCSI image is the only Irish winner at these prestigious international science images awards and 1 of 22 winners of the 2017 Awards.

The RCSI image entitled “#breastcancer Twitter connections” was generated from 92,915 tweets containing #breastcancer, collected over an 8 week period. The image illustrates how Twitter can facilitate a vast, dynamic global conversation to discuss healthcare issues. Twitter users are represented as dots with interactions between users shown as lines, with larger dots indicating the most connected and influential participants in the conversation about breast cancer.